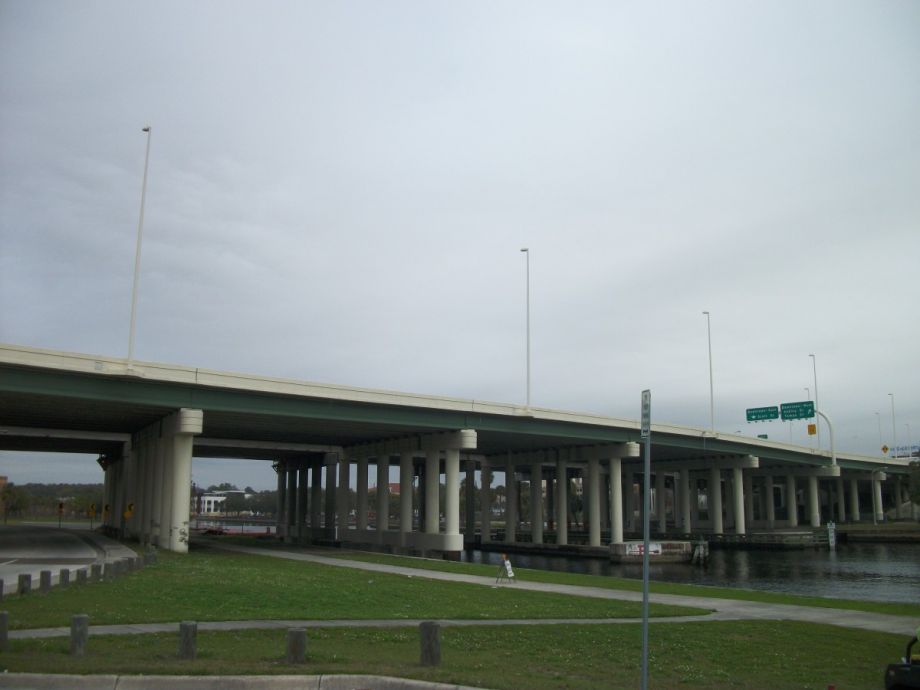 I-275 near downtown Tampa (Photo by DanTD)

If some Tampa residents had their way, the city would join San Francisco, Portland and Seoul in the burgeoning trend of highway teardowns. Whether they will have their way depends largely on the Florida Department of Transportation — and state DOTs don’t have the best record of listening to cities where freeways are concerned.

The road in question is I-275, which runs through the Seminole and Tampa Heights neighborhoods. In the works is an expansion called the Tampa Bay Expressway, or TBX, which would require the razing of a number of homes and businesses.

“His presentation, ‘Bifurcation to Boulevard,’ showed how transforming the Interstate into a wide, landscaped boulevard, featuring bike and pedestrian paths and even light commuter rail, would transform the area north of Tampa’s downtown core,” according to the Times. “‘It is expendable,’ he said, arguing that over the past 50 years, I-275 has severely damaged neighborhoods, polluted their air, raised noise levels well beyond acceptable standards, and lowered property values.”

According to the paper, the Florida DOT had no comment on Frank’s plan, but a spokesperson called TBX a “major interstate improvement program to modernize key interchanges, replace aging infrastructure, and improve mobility on portions of I-275 and I-4.”

As Next City has covered, state DOTs tend to have a car-centric mentality that favors road expansions over the rail or bike/ped alternatives that many cities are turning toward. (See this story for a look at how Tampa wants to expand its streetcar.) That’s changing in certain states — Massachusetts and Oregon, to name a few — but the urban renewal legacy of highway growth tends to run institutionally deep.

But cities are creative. New Haven, Connecticut, is leveraging $36 million in federal TIGER grants to convert a highway spur into a pedestrian-friendly boulevard, Lisa Prevost reported for Next City in January.

The highway connector, Route 34, links Interstates 91 and 95 with downtown, dumping high-speed traffic onto parallel frontage roads before it comes to a sudden end. Originally conceived in the 1950s as a through connection to the suburbs, the connector was never completed, and instead has acted as both a physical and visual barrier between the downtown district and Yale University’s sprawling medical complex, a struggling neighborhood known as the Hill, where roughly 40 percent of residents live below the U.S. federal poverty line, and Union Station, the city’s main transit hub.

By transforming the highway into a boulevard that slows traffic and links with downtown cross streets, the city hopes to knit the neighborhoods back together.

In La Crosse, Wisconsin, a similar struggle has been ongoing — but in this case, city officials are trying to prevent a highway from being built in the first place. In doing so, they’re pushing back against the state DOT, which set aside $80 million for the project in 1998, Next City reported in March.

Last year, the U.S. Department of Transportation did take a tour of several cities that focused on urban planning around downtown freeways. When the DOT announced the tour, then-Secretary of Transportation Anthony Foxx said: “This Challenge asks communities to reimagine how they can be better connected, and empowers them to design innovative transportation projects that serve everyone that lives there. We are excited to work with thought leaders who share our focus on designing a 21st-century transportation network that is built by, for and with the communities impacted by them.”

It seemed to be a nod toward cities that don’t want to be held captive by divisive thruways. But as Stephen Stofka noted for Next City at the time, the future of such federal programs was, then, up in the air with the election on the horizon. Fast-forward to 2017 and Foxx is no longer at that post, which is held now by Elaine Chao — under a new president whose budget blueprint certainly doesn’t suggest an urbanist-first agenda.