Growing Wisconsin City to State DOT: We Don’t Want Your Highway – Next City 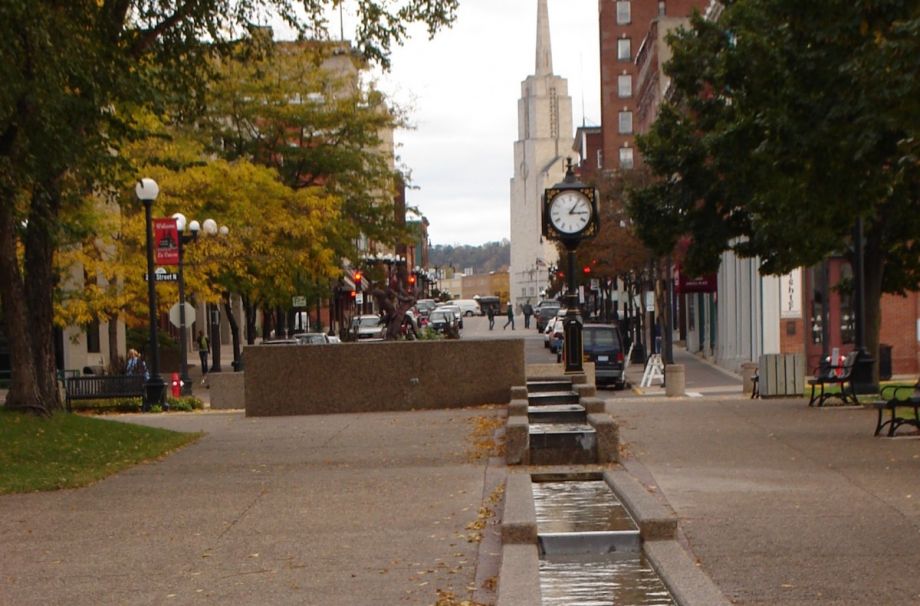 There’s millions of dollars of funding set aside in Wisconsin’s budget for a highway that would pass through La Crosse, a riverfront city in the western part of the state. But many people in La Crosse don’t want that highway to be built.

The Wisconsin Department of Transportation (WisDOT) set aside $80 million for the project back in 1998, but city officials are pushing for improvements to walking, biking and public transportation options, as well as asking the state to assess current traffic demand forecasts.

“That’s the struggle we’re having now,” La Crosse Mayor Tim Kabat says. “We’re presenting this information on land use and densities to them to say, ‘Look, we need to redo the travel demand forecasting, because it’s just not accurate anymore.’”

La Crosse, which has a population of around 50,000, is bordered by the Mississippi River on the west and high bluffs on the east. In the middle, the city is bisected by a marsh formed by the La Crosse River meeting the Mississippi. Roads already cross the marsh (depending on who you ask, there are already three or four — the fourth is across state lines in Minnesota); the 1998 plan would add another.

A city referendum on the highway was “pretty resoundingly defeated,” Kabat says. But the project remained on the books. A few years back, WisDOT approached the city and said, essentially, that it was time to fish or cut bait.

In 2015, a DOT-led planning process came up with six options for the region meant to relieve congestion on the city’s north-south corridors, the La Crosse Tribune reported. “All include significant new pavement,” which is opposed by neighborhood organizations, environmentalists and the mayor. Last September, the department said it wouldn’t consider any options that did not include any new roads.

Meanwhile, however, La Crosse and some neighboring cities are forging ahead. La Crosse County is already a leader in non-automobile mobility, with 2 percent of residents biking to work and 5 percent walking to work. In the city proper, 8.6 percent of residents walk to work. The city’s bicycle and pedestrian master plan, released in 2012, states that its goal is to become a Gold-level bike-friendly community as recognized by the League of American Bicyclists (it’s currently Silver) and a Gold-level walk-friendly city (it’s currently bronze).

The city’s first neighborhood greenway will open later this year and more are planned; a project to install connecting signage from a bike trail in nearby Onalaska to downtown Lacrosse is underway, and biking and walking is generally up. A “Transportation Vision” released in 2015 and incorporated into the city’s comprehensive plan affirms that La Crosse “must look at all transportation options and protect our neighborhoods and natural resources, because cities exist for the people that live in them, not as a hodge-podge of highways, parking ramps and garages to accommodate only automobiles.”

Yet the state still says that to meet demand, the road must be built.

The political climate is partly to blame: Wisconsin Governor Scott Walker’s budgets prioritize roads over other modes of transportation. His 2015 budget eliminated the state’s complete streets program (now agencies need only “consider” whether to add bike lanes and sidewalks).

Too, faulty data may be part of the problem. Kabat says the state’s projections are based on “the pre-recession housing boom of people wanting to build 2,500-square-foot homes in the country,” not current data that show residents moving downtown. Census data show that La Crosse city is growing after a few decades of mostly flat population levels, and anecdotal evidence says that those new residents are choosing to cycle and walk.

“Ten years ago, when I used to ride my bike around I would see other people on bikes and I almost always knew who that person was,” says Robbie Young, who sits on the city’s pedestrian and bicycle committee. “And now there’s all these people that I’ve never seen before, which is awesome and weird.”

But others say the city isn’t moving fast enough in that direction.

According to Andrew Londre, a La Crosse business owner and a Next City Vanguard, “there hasn’t been as much of a focus in my opinion on trying to densify. And so we have these almost contradictory positions that the general public has taken, which is an opposition to building roadways out to the suburbs. They’re rightly opposed to things that would harm the city from a transportation perspective but they have not yet” embraced denser downtowns. “I think that the city is starting to move in the right direction, but in my view not fast enough in terms of density. Because if the region is growing … [housing is] not keeping up. There needs to be more of an emphasis from a policy perspective on densifying where appropriate.”

“Our biggest missing piece here within the city is adequate housing and a diverse mix of housing,” says Will Kratt, a civil engineer who focuses on transportation. He adds that he believes a number of the reasons people choose not to live in the city are psychological, however — a fear of crime or the thought that the suburbs are less expensive.

“I think if we can figure out a way to get people living in communities where they can live, work and play in a smaller area … you can increase your quality of life and decrease your demand on the transportation system all at the same time,” he says.

“The city’s zoning code has promoted mixed uses in our commercial districts (ground floor commercial with residential on the top floors) for decades. This has helped to facilitate the building boom taking place downtown,” Kabat said by email. “We are … working on increasing densities along our transit corridors to promote higher density development that can be served by transit.”

WisDOT is still studying the potential highway solutions it identified in its most recent planning process, so a new highway through the marsh is not yet imminent. But pro-mobility advocates say a new way of thinking about transportation in Wisconsin is needed.

“I think it’d be great to see the state DOT propose [bike paths] off the bat,” Young says. “To see an initial proposal for a street redesign that includes treatments for all users … would be a very welcome surprise. [Instead], somebody else has to come in and propose this totally radical idea of putting in a bike lane. If you could see this idea not come from advocacy groups but have it be a more normalized way of modeling our infrastructure … .” He laughs. “I could go to a lot fewer meetings.”

Editor’s Note: This article has been updated to identify Andrew Londre as a La Crosse business owner. A correction has also been made to reflect that while La Crosse’s population has grown, the city is not growing faster than the surrounding county.