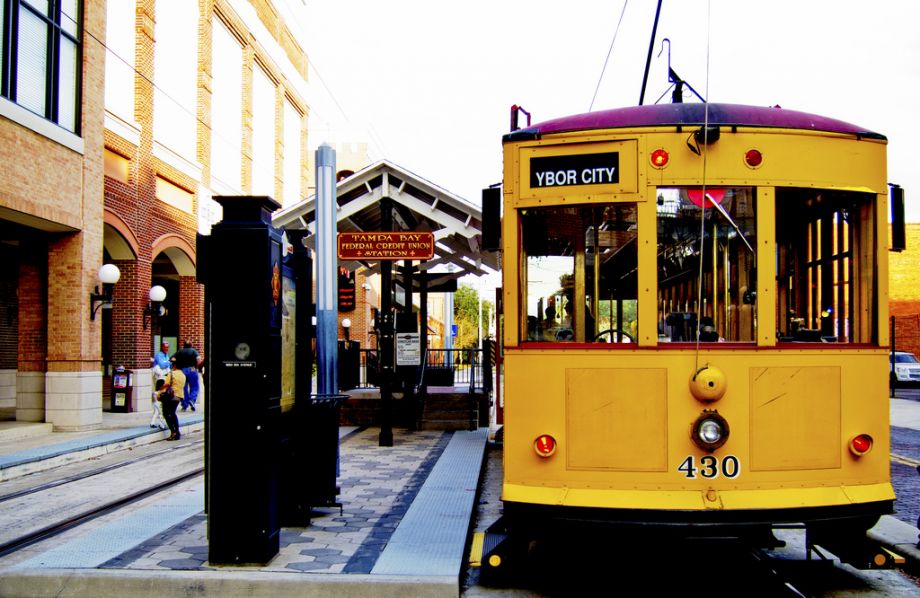 With the Tampa Bay region stalled on meaningful public transit investment, the city of Tampa is asking residents whether expanding an existing tourist-centric streetcar might help alleviate their transportation woes.

Currently, the novelty line runs 2.7 miles between the Ybor City and Channel District neighborhoods, a short stretch that doesn’t reach downtown’s highest job concentrations, let alone the airport or the University of Tampa. It doesn’t even begin operation until noon on weekdays, and 11 a.m. on weekends, greatly diminishing its usefulness to commuters.

Now, with $1 million from the Florida DOT, and another $677,390 from the city’s own coffers, Tampa is considering what an expanded streetcar system might look like, and engaging in a series of public feedback sessions. Despite a perception that the streetcar is for tourists, not residents, Christina Barker, special assistant to the mayor, says the public’s support for new transit options is high.

“We’re hearing a lot of different opinions about how the streetcar can be used and where it could be going, but I think the overall theme is there is demand for this kind of transportation option, that people want more options, and they don’t want to need to get in their cars to go everywhere,” she says.

Right now, that’s a Tampa resident’s best option: their own car if they can afford it, the free Downtowner circulator van if they can’t. According to an investigation by the Tampa Bay Times earlier this year, among the 30 largest U.S. metros, the Tampa Bay region ranks near the very bottom for transit coverage and usage, and spends far less on transit than any other major metro area. As a result, most people who can drive do so, leading to worsening congestion as other options like Lyft and Uber also clog the roads and surface parking slowly disappears, replaced by housing.

Barker says congestion and transportation always rank among residents’ and potential businesses’ primary concerns. “But as a city we tend to have to rely heavily on our surrounding county for funding sources and different avenues to build these bigger projects, and they haven’t been panning out,” she says. “So we took a step back and started looking inward to, what is a project that the city can really champion that’s our own?”

The streetcar wouldn’t solve regional transportation issues, then, but it might be able to connect dense Tampa neighborhoods where transit demand is high. At an April 4 meeting, consultant HDR presented six possible corridors to the public. Attendees were able to register their feedback and preferences in real time using software called Mentimeter.

Of the 69 people in attendance, 55 said they primarily commuted by car. Most didn’t live in the downtown core, but about half commuted there for work. Their responses to specific corridors showed a clear preference for a north-south route, specifically one that would connect the downtown to the Marion Transit Center and the Tampa Heights neighborhood. A diagonal corridor slicing through downtown from northeast to southwest, passing through the University of Tampa, was the second most popular option. Three possible east-west corridors received about equal support.

“To build a streetcar system that encompasses more of the city, it would have to be done in phases. So what we’re looking for right now is: What is the logical next step?” says Barker.

Steve Schukraft of HDR says the city will focus on one route for now, while keeping the system flexible to introduce more service in the future. Based on feedback, Tampa and HDR will select two or three possible alignments to present to the Federal Transit Administration for approval.

He also says the proposal is still mode neutral. This could be a traditional streetcar expansion, or the system could use rubber-tire vehicles or even be equipped to handle autonomous vehicles in the future. Whether or not traditional streetcar technology is utilized might depend on how far the system is expected to expand. For 5- to 6-mile downtown connections, a streetcar is just fine. Over longer distances, the system would need more power.

In the public meetings, say Schukraft, while most people are open to the idea, “We are getting some skepticism about extending streetcar partly because of the concerns about current service. … Because of budget constraints, it hasn’t provided a consistent full-day service that’s close enough headways for people to make that a commute choice. So it’s a special purpose service and a special purpose trip now, so people are skeptical of investing more in that because they don’t believe it would address downtown’s transit concerns.”

Barker hopes the public feedback process is changing how people think of the streetcar, but she too acknowledges that the streetcar’s current limits make some residents wary of expansion. Local station News Channel 8 recently took a skeptical look at the economics of it all, noting that no matter what, the streetcar, like most transit systems, won’t pay for itself. But it could do better than it does now, says Barker.

“If it operated during commuting hours, if it connected to more jobs, I think you’d see a much bigger return on investment than we’re seeing right now,” Barker says. “Historically we haven’t necessarily funded operations of the streetcar that would demand the ridership that we’d like to see it have.” She also hopes the feedback sessions are informing the public on how other cities’ streetcar systems work. Unlike in D.C. or Seattle, Tampa’s streetcar does not run in the middle of the roadway but in its own right-of-way. Maintaining that design in an expansion could allow Tampa to avoid the slow speeds and traffic issues that have sometimes accompanied other streetcar projects.

The final public meeting, at which HDR will present results from the first two sessions, will be held on May 2.