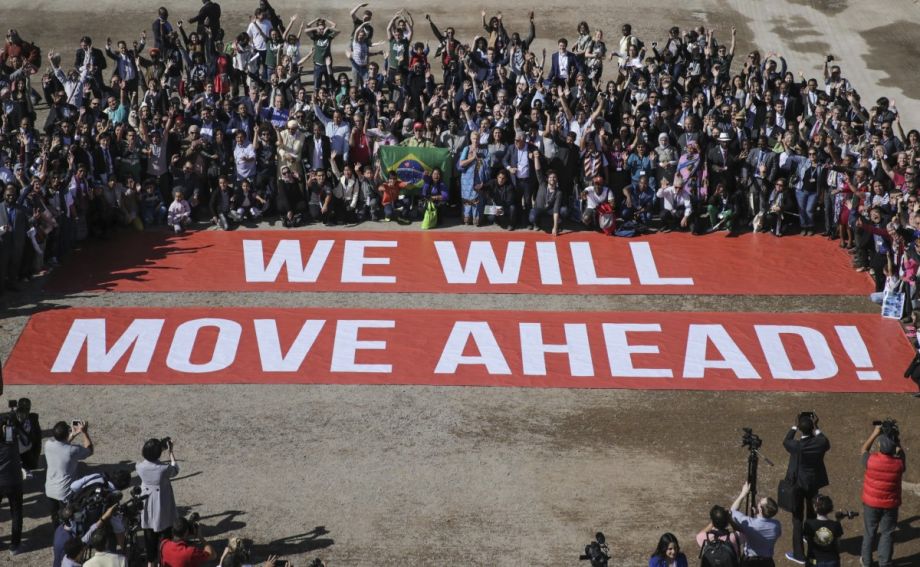 Participants at COP22, a follow-up on the Paris climate agreement, stage a public show of support for climate negotiations in Marrakech, Morocco, on Nov. 18. (AP Photo/David Keyton)

Thirty-seven mayors from cities across the U.S. have signed an open letter urging President-elect Donald Trump to take a firm stance on climate change by embracing the Paris climate agreement and supporting local initiatives with federal funds. The mayors — who are from both red and blue states, but are mostly Democrats — represent cities that have largely developed their own climate plans and have banded together as the Mayors National Climate Action Agenda.

Trump once said climate change is a hoax, but last week said to the The New York Times that he has “an open mind to it.” When a Times reporter asked him about the connection of humans to climate change, he said:

In their letter, the mayors of Los Angeles, Boston, New York, Chicago, Philadelphia, Atlanta and more attempt to appeal to Trump’s pragmatic side: Climate change is bad for business, they write.

“Estimates have shown these impacts from climate change could cost the American economy $500 billion annually by 2050, and that figure will only rise unless we work together to stem, and ultimately reverse, the amount of greenhouse gases entering our atmosphere.”

“The cost of prevention pales in comparison to cost of inaction, in terms of dollars, property and human life. As our incoming President, as a businessman, and as a parent, we believe we can find common ground when it comes to addressing an issue not rooted in politics or philosophy, but in science and hard economic data,” the letter reads.

“As President, you will have the power to expand and accelerate these local initiatives, which the people resoundingly supported,” the mayors write. They urge Trump to help cities leverage federal funds for their transit, energy and infrastructure projects, and to lead the country in switching over to renewable energy sources.

The signatories also include the mayors of Oakland, Berkeley and New Orleans, all of which have published their own resilience blueprints. The mayor of San Diego is absent from the list of signers and from the MNCAA, though the California city is working on its own climate change plan.

In the end, the mayors seem to recognize these local efforts might be all they’ve got, but they’re hopeful. The letter concludes, “While we are prepared to forge ahead even in the absence of federal support, we know that if we stand united on this issue, we can make change that will resonate for generations.”