Berkeley Resilience Plan Is About More Than Fires and Flooding 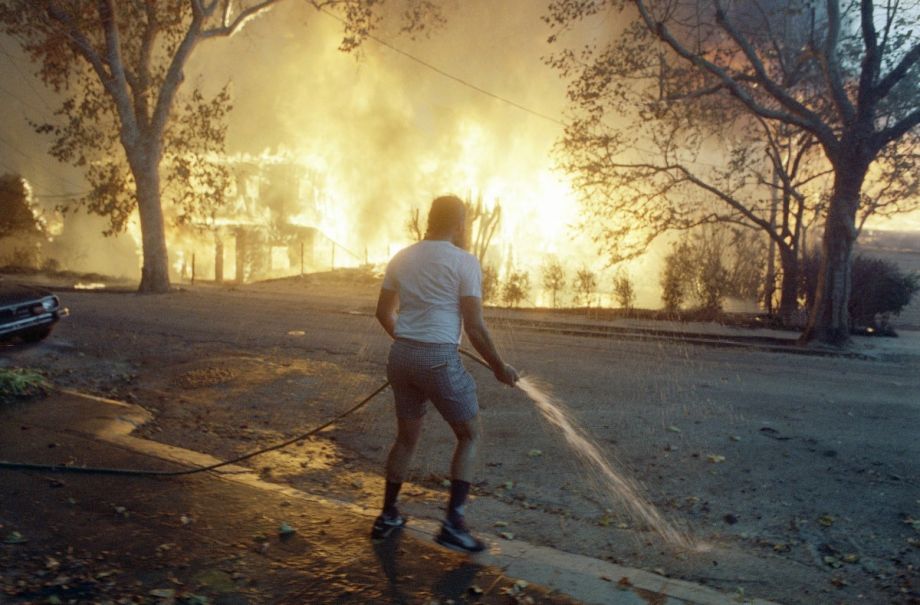 A Berkeley resident stands with a garden hose in 1991 as a wildfire ripped through the city, destroying nearly 3,500 homes and killing 25 people. (AP Photo/Kevin Rice, File)

To increase disaster preparedness, Berkeley wants to make better neighbors. A cornerstone of the city’s new resilience strategy, released earlier this month, is forging stronger connections among neighbors and neighboring institutions to help them better withstand the effects of climate change and natural disasters, while also addressing chronic social issues like racial inequity. The resilience plan is the first of its kind in the Bay Area and only the sixth such official plan in the world, according to the city.

“The challenges that we face as a city, and the challenges the strategy is designed to address, are frequently interconnected,” says Berkeley’s chief resilience officer, Timothy Burroughs, who led the planning process. Flooding along the city’s shoreline, for example, is worsening as a result of both sea level rise and more extreme rains associated with climate change. California’s ongoing drought affects the economy, increases wildfire risk and threatens urban forests. Berkeley is situated on a fault line, at high risk for earthquakes. These problems don’t threaten all residents equally.

“We know that in the event of a major earthquake it will affect every aspect of our community,” he says, “and we know that low-income housing units, for example, will be affected at a higher rate.”

When asked about their resilience priorities in an online survey, residents didn’t just mention natural disasters. They wanted to see more economic diversity, and better access to education, skills training and employment support. One of the six goals laid out in the plan is to advance equity, such that disaster preparedness resources, education and services are more equally distributed among city residents. Berkeley already offered incentives to neighborhoods to throw block parties where city staff will provide training and education, among other resilience-related efforts, but only a minority of residents were taking advantage. Under the new plan, the city will designate certain local institutions as “community resilience centers” (CRCs), which will receive disaster supplies and planning assistance. CRCs will provide training and education tailored to the communities they already support. Some of the first CRCs will include La Peña Cultural Center, which promotes intercultural understanding, and Harriet Tubman Terrace, an apartment complex for low-income seniors and people with disabilities. 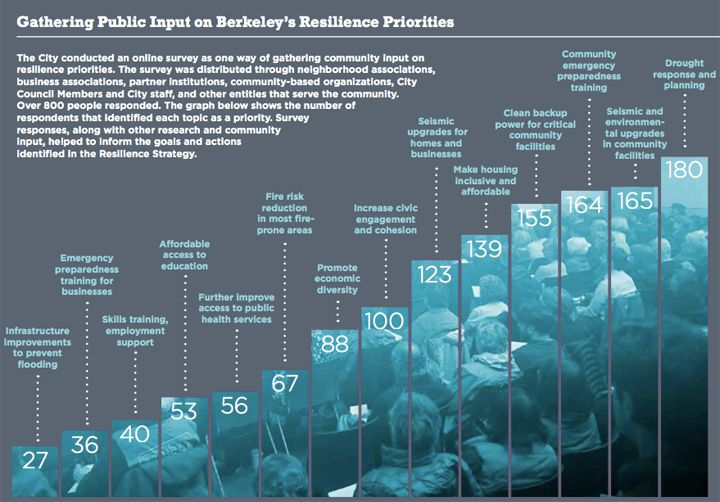 This approach also aims to forge crucial local connections. When neighbors know who in their community might need more help evacuating during an emergency, it can improve outcomes for the most vulnerable residents. “We know that when people are connected at the neighborhood level, we know that those neighborhoods respond to and recover from disasters more effectively,” says Burroughs. “ … And we also know that inequity robs our community of the full participation of all community members.”

To increase participation in local governance, the city will create a racial equity action plan, in collaboration with the NAACP, local labor unions and other partners. Its goals include advancing equitable hiring practices within city government.

Berkeley’s new resilience strategy also aims to strengthen access to energy in case electricity is lost in a disaster. Often backup power is provided by diesel generators, a relatively low-cost option that is nonetheless noisy, polluting and limited in its capacity. Instead, Berkeley will pilot a system of microgrids: Multiple neighboring institutions will partner to form their own energy grid powered by renewable sources like solar, so that facilities can continue to operate autonomously when the grid is disrupted and even when power is at its most expensive. The city has been tentatively awarded a $1.5 million grant from the California Energy Commission to design a microgrid that will serve critical municipal facilities downtown.

The city, along with Alameda County, of which Berkeley is a part, is also considering creating a community choice aggregation program. This allows cities or counties to form a not-for-profit local power agency that leverages residents’ and businesses’ buying power to fund clean energy projects, buy renewables on the market, offer energy-efficiency incentives and more.

Other aspects of the city’s strategy include plans to promote electric vehicle use and residential solar installation; to integrate green stormwater infrastructure into new projects and climate impact consideration into land use planning; and to improve citywide information systems.

Lastly, the plan calls for working with other Bay Area cities to take a holistic approach to resilience. Berkeley is one of four neighboring cities to be chosen to participate in the Rockefeller Foundation’s 100 Resilient Cities (100RC) network, along with San Francisco, Oakland and Alameda (which later, in a rare turn of events, lost the grant). These and other cities in the region will come together to plan a Sustainable Water Summit, catalyze investment in public infrastructure and lobby for policy change. They are also collaborating on a design challenge, which will invite teams to develop adaptation solutions around climate change impacts like flooding and drought.