Several U.S. Cities in the Running for New Sea Level Institute – Next City 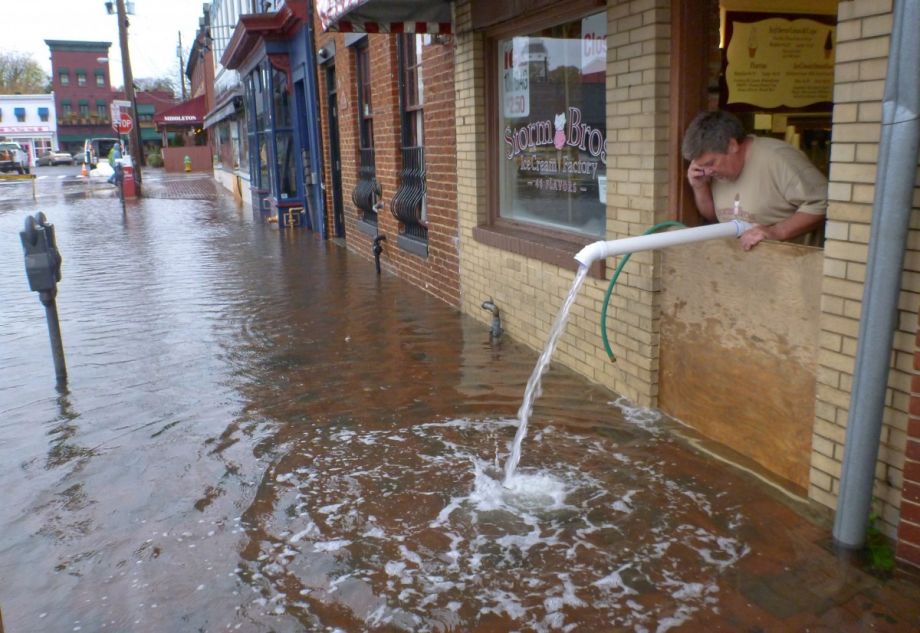 A shopkeeper pumps water out of his flooded ice cream shop in downtown Annapolis after Hurricane Sandy. (AP Photo/Blake Sell)

This year, one lucky coastal city will be chosen as home for the International Sea Level Institute, a young nonprofit looking to educate engineers, planners, architects, politicians, attorneys, financiers and more about the dangers of sea level rise and the need to adapt.

“We all know what a hurricane is, we know what an earthquake is, we know what a tsunami is, right, we’ve seen them. We’ve never seen sea level rise before,” says the institute’s director, oceanographer and consultant John Englander. “We’ve never had a problem like this, where the shoreline is going to move, slowly, century by century. It’s been stable for all of human civilization. That’s why this is such a daunting thing to get your head around.”

The institute will tackle a global problem that will be experienced differently in every locale, requiring custom solutions. Miami, for example, built on porous limestone, can’t be saved by seawalls, because water will still seep into the city from below. New York, on the other hand, sits about 6 feet above sea level, on impervious rock, so Englander says a seawall around the lower end of Manhattan could keep the island dry for centuries. Norfolk, Virginia, and New Orleans, both built on sinking land, have still other concerns.

Those regional differences are part of the considerations for where to locate the institute. Miami, San Francisco and a spot in Rhode Island are all in the running. Englander is also in talks with Annapolis, a half hour east of D.C., where historic preservation is a concern. The colonial sailing town has seen downtown flooding increase in frequency from four days a year half a century ago, to 40 days a year of flooding today.

Englander, who is also the author of High Tide on Main Street: Rising Sea Level and the Coming Coastal Crisis, says wherever the institute chooses to locate, that city will serve as a living laboratory, putting the challenges of sea level rise in context and modeling adaptive solutions. He cites the U.S. Green Building Council as a model for how the institute might operate. “We think we can teach people about sea level versus storm surge versus king tides and get across some concepts just like they do with building energy use efficiency,” says Englander, referring to flooding causes that are commonly confused with one another.

“Planning for sea level rise is again a daunting challenge, because it’s not just your building, as I like to remind people. Your building might be on a mound of earth 10 feet above the water, but if the streets around you, or the utility plant, the water plant, the wastewater treatment plant are underwater, it means your building’s not functional.” He envisions the institute offering a certification program for engineers, planners and others, much like the Green Building Council’s LEED certification.

The institute will also battle common misconceptions about sea level rise, as Englander does in his writing and consulting work. “One big misunderstanding is to think that building renewable energy like solar will somehow slow sea level rise,” he says. Environmentally positive behaviors like recycling will all help reduce emissions, which could stop the global temperature and thus the oceans from rising more, but we’re already seeing the effects of higher waters now. “Locally what we need to do is adapt to sea level rise, which is unstoppable, and begin thinking what does it mean for zoning and building codes, public utilities, where the water company is and so on,” says Englander.

He’s also out to clarify the differences between storm surge, king tides and sea level rise. In the first two scenarios, waters rise temporarily and then recede. “As sea level rises, it means that the storms will have a greater impact, but the difference with sea level most people haven’t thought through is that because it results primarily from the melting of the ice sheets in Greenland and Antarctica, that it’s not going to go down for like thousands of years,” says Englander.

To plan for that requires looking much further out than most cities currently do. In his consulting work, Englander recommends projects consider the consequences at least 30 years into the future. It will take that long to see the more extreme impacts of sea level rise, he says, which is why it’s so vital to start educating planners, project managers and the investment community now. He cites Seattle’s seawall rebuild and waterfront highway tunneling projects as examples: An abundance of money is being poured into both, without full consideration for how much waters will rise in the next 50 years.

“That’s all the reasons we need a sea level institute,” says Englander, “to be a thought leadership center to bring together expertise and actually develop more expertise on how do we plan and adapt.” The institute will decide on its first location this year. Ultimately, Englander plans to have multiple offices around the world.