Designing a Way to Live in Boston’s Watery Future 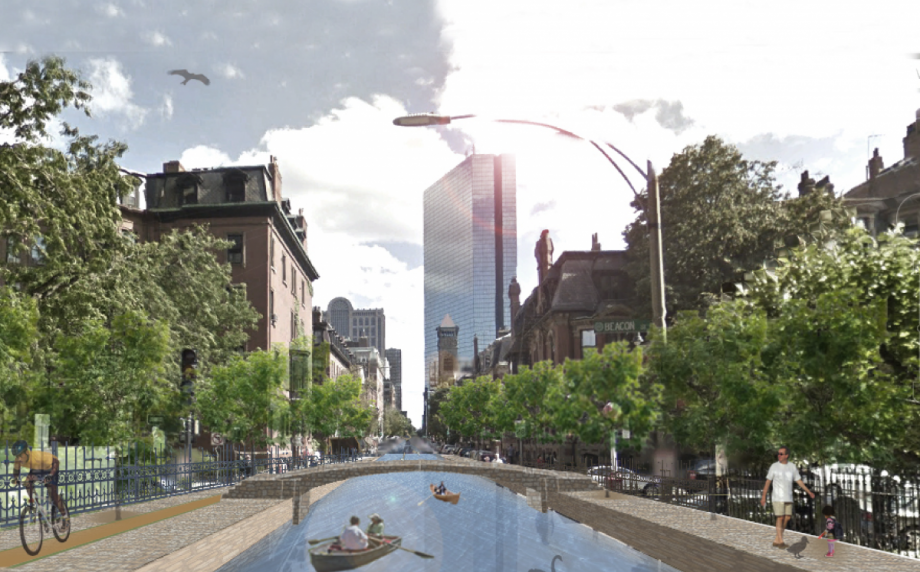 The rendering shows a serene setting: people rowing along a placid canal spanned by a footbridge, a swan floating atop the rippling water. This peaceful scene, however, is a shocker if you are familiar with the city of Boston. Because this is a vision of what might come to pass in Back Bay, one of the city’s most historic neighborhoods — and a place where anyone who tried to row a boat today would be scraping the oars on asphalt.

This image of Boston in an era of rising seas and climate change is part of a new report from the Urban Land Institute of Boston/New England, “The Urban Implications of Living with Water” PDF. The report looks at how the city might deal with rising sea levels by advancing potential solutions for four different neighborhoods representing four different typologies: Revere Beach; Alewife in Cambridge; the Innovation District on the South Boston waterfront; and Back Bay. All the ideas emphasize the role private developers can play in concert with city government to make Boston a safer and more resilient city.

In Back Bay, built on what was then marshland in the 19th century, that meant a radical re-envisioning of what is some of the most valuable real estate in the city. The proposal for the neighborhood includes turning alternating north-south streets and east-west alleys into canals (top photo) that connect to the Charles River via a lock system, thus accommodating the increased flow of water into an area that is only four feet above the current high tide and creating a recreational opportunity. Busy Storrow Drive would become a waterway in this vision, not a roadway.

Barnat knew that the images of a canal-laced Back Bay would raise eyebrows, and that was part of the intent. “It’s certainly the most creative of our ideas,” she says. “What I loved is that it sparks some imagination and gets juices flowing about what it really means to live with water. We wanted to give our community of land-use planners some time and opportunity to think through how can we use this to our advantage, and for designers to come up with creative solutions.”

The city will need creative solutions. While Boston has not had a watery catastrophe like Katrina or Sandy, it is nonetheless one of the largest cities in the United States to face a serious threat from rising sea levels. The ULI report cites figures from the National Oceanic and Atmospheric Administration that show the high tide line in Boston Harbor has risen almost a foot in the last century. Projections for the next hundred years range widely, from one foot to six feet. The desirable Back Bay neighborhood sits only about four feet above today’s high tide line. 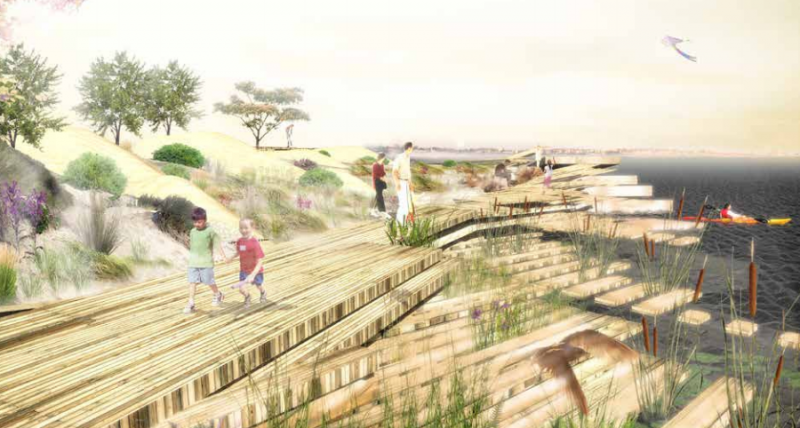 A plan for a dune park in the Innovation District of South Boston’s waterfront (Credit: Arrowstreet and Halvorson Design Partnership)

Solutions advanced by the report — which incorporates feedback from developers, designers and city officials — include the creation of a resiliency fund in the Innovation District that would help finance major infrastructure improvements such as seawalls and green infrastructure; raising sidewalks, improving drainage, and building sea berms in and around a new development site at Revere Beach that is vulnerable to both rising sea levels and storm surges; and employing flood-resilient building techniques in new developments in Alewife, which is prone to freshwater flooding from increasingly intense precipitation events. 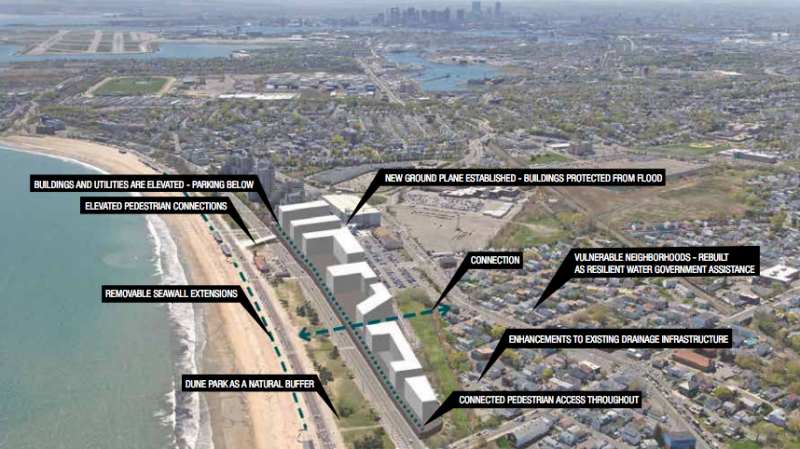 Barnat says that the city’s long, stable history is an asset when it comes to imagining scenarios a century hence, as is the presence of educational and medical institutions such as Massachusetts General Hospital, which already operate with 80- or 100-year planning horizons.

“One of the best outcomes of this report is that it’s getting people to grapple with the idea that this is something that they have to be incorporating into their design,” says Barnat.

She is confident that the city has the necessary tools and mindset to face the incoming tide without abandoning high-value and beloved parts of the city — even if some of them may look startlingly different a generation from now.

“Back Bay, it’s historic, it has high property values,” she says. “How do we make that work rather than retreat? It goes back to our historical roots. If in the 1800s they could make Back Bay, then in the 21st century we can come up with the technology to make it work.”