Why an Ambitious New Sustainability Plan for L.A. Deserves More Than a Dusty Shelf – Next City

Why an Ambitious New Sustainability Plan for L.A. Deserves More Than a Dusty Shelf 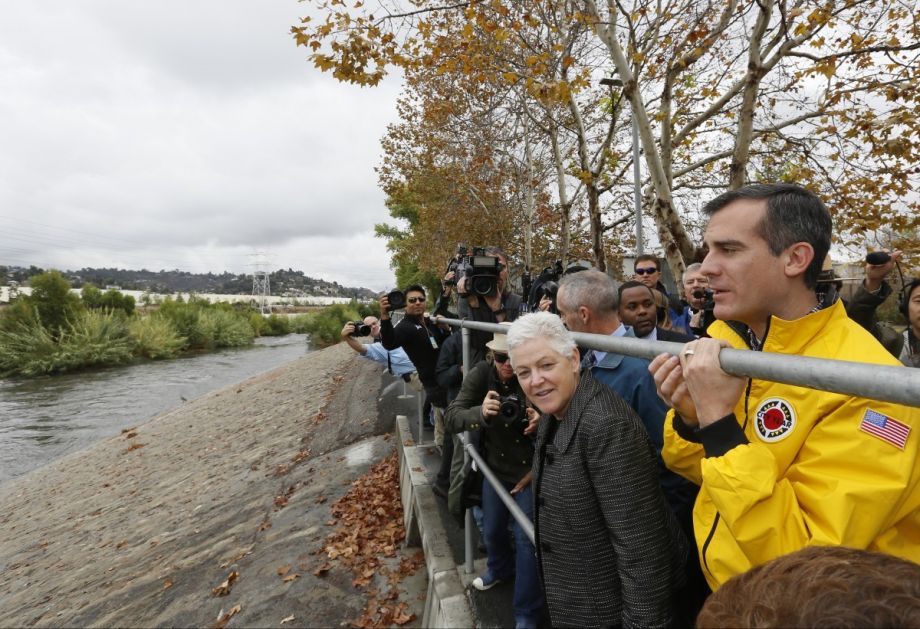 At 108 pages, with long-term objectives, “near-term” outcomes and priority initiatives, officials seemed to sense they might face a PR hurdle. L.A., a city known for smog and imported water wants to create a sustainability strategy more ambitious than any policy enacted by the state of California? Really?

Granted, Eric Garcetti’s 2015 Los Angeles is not David Lynch’s 2001 Los Angeles, all wide boulevards, distant headlights and sprawl. As the new plan points out, Los Angeles now leads major cities in installed solar power and is investing in a massive network of buses and trains. It’s a place, contrary to many a stereotype, where people walk.

Still, old tropes die hard — particularly those of cars and thirsty lawns. The new plan takes a cautionary tone, stating that without specific milestones and measurement tactics, many long-range goals “end up gathering dust above the desks of bureaucrats who commissioned them.”

Prediction: This will not be one of those plans. (It’s name however, “pLAn,” might be destined for a rewrite.)

So how does the city aim to meet these goals? Again, officials spell out their strategies in 108 pages of detail, but several themes stand out. The most important: To fight climate change, Los Angeles needs to fight poverty. Today, the city has one of the highest levels of income inequality in the nation, so you might tend to dismiss 34 mentions of “equity” as buzzword love.

And the new plan actually does spell out means to those lofty ends: By 2017, the city will begin “constructing 17,000 new units of housing within 1,500 feet of transit.” By 2035, it will reduce the number of rent-burdened households by 15 percent. In 2017, Mayor Garcetti will raise the minimum wage to $13.25 an hour (not Seattle’s $15, but a start). It also outlines targets for asthma reduction, food access and cap-and-trade funds.

Some chapters do seem more idealistic than others. For example, those deep emission cuts (80 percent by 2050) are paired with an entire section on growing the city’s economy through green jobs. And while some very intelligent people argue that falling emissions and economic growth can go hand in hand, others aren’t so sure. Meanwhile, like many long-range documents put out by people who’d like to re-elected, it’s mostly carrot and very little stick. Whether or not the city can really achieve an 80 percent reduction by incentivizing green behaviors (instead of discouraging not-so-green behaviors) remains to be seen.

But the nuance with which the plan pairs wealth redistribution and environmental policy shows deep consideration of issues that don’t always line up. It’s much too easy for officials to build a park or rail line in a lower-income neighborhood and call it environmental justice — never mind the gentrification that could follow and drive community members out. But when I ask Petersen about the price increases that often come with green development — counterintuitively helping to further sprawl as people migrate out — he points to the plan’s emphasis on affordable housing and minimum wage increases.

“Those are the kinds of intersections we need to see,” he says.

He’s right. And though pLAn may be ambitious, it’s also detailed, specific and very well thought-out. It was written for skeptics — and hopefully, because of that, it won’t end up gathering dust.