Not Your Typical Block Party in a Gentrifying NYC Neighborhood 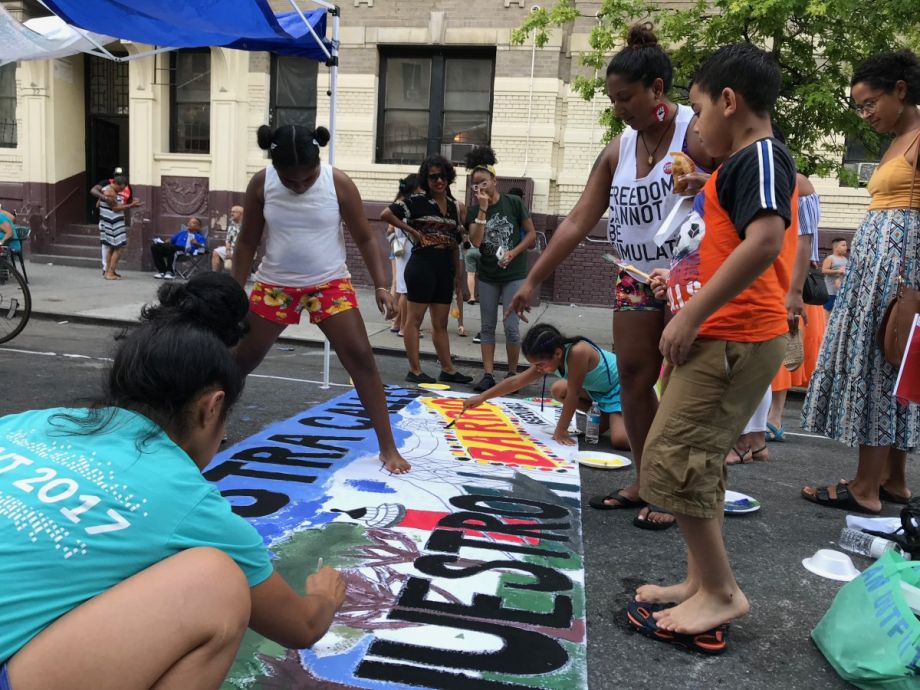 “Nuestra Calles, Nuestro Barrio “  —  Our Streets, Our Neighborhood  —  is the rallying cry for residents of Northern Manhattan's Inwood neighborhood, as they lobby for tenant protections in the wake of steadily decreasing affordable-housing options. (Photo by Oscar Perry Abello)

Paloma Lara danced a lot last Saturday, at a block party she helped to plan in New York City’s Inwood neighborhood. There were local bands, local choirs, percussion lessons for kids and a community art project where neighbors painted a banner saying “Nuestra Calles, Nuestro Barrio” — our streets, our neighborhood. Over the decades, Inwood has been home to many waves of immigrant communities, most recently from the Dominican Republic, and proudly so, including Lara.

After much dancing with her feet, Lara got up on stage to do a dance of words with New York City Council Member Ydanis Rodriguez. This was no ordinary block party — it was a block party about zoning.

The combined Inwood/Washington Heights neighborhood sits at the northern tip of Manhattan, still considered a last-bastion of affordability by those fleeing the exorbitant and rising rents of Manhattan’s Lower East Side or as far as Brooklyn. The area has two subway lines running through it, two landmark city parks (including the last remaining untouched wilderness in Manhattan), and more than 47,000 rent-stabilized units — more than any other neighborhood in New York City. Many, like Lara, are also attracted to the strong Latino culture of the neighborhood, particularly its Dominican sounds, smells, and flavors. “I can walk around these streets and feel comfortable as myself,” says Lara.

After several years of study and community engagement, at the invitation of Council Member Rodriguez, the city is now on the verge of deciding whether to rezone large swaths of Inwood, permitting taller, denser construction, thereby triggering the city’s two-year-old inclusionary housing law and resulting in new units of what the city considers permanently affordable housing.

The new affordable housing is needed, Rodriguez argues, because of the continued population influx from other parts of the city. They’re also needed, he says, to make up for the loss of existing affordable or rent-stabilized housing to predatory landlords who have swooped in with investor backing to flip affordable or rent-stabilized housing into market-rate and luxury apartments and condominiums. It’s a pattern so pervasive, the city initiated or expanded three programs last year to try and weed out the practice.

On that much, Lara agrees. But onstage on Saturday, on behalf of a coalition of Inwood and Washington Heights residents, Lara demanded that Rodriguez vote “no” on the rezoning that was partly his idea in the first place.

“Before any rezoning, we need real tenant protections, and protection for small business tenants,” says Lara, a member of Northern Manhattan is Not for Sale, a coalition of Inwood and Washington Heights residents who organized the block party.

By “real tenant protections,” Lara refers chiefly to eliminating the regulatory loopholes that have enabled predatory landlords to flip rent-stabilized housing into market-rate or luxury housing. According to data from state regulators, since creation of these loopholes in 1994, they have facilitated a net loss of more than 147,000 rent-stabilized units across New York City. About two-thirds of those units have been in Manhattan.

The problem for Rodriguez and the rest of the city is that city’s rent stabilization laws are controlled at the state level, where, as ProPublica once reported, luxury real estate developers have had a stranglehold on legislators in New York.

Grasping for any additional measures to stem the losses, Rodriguez and Manhattan Borough President Gale Brewer recently joined NYC Housing Preservation and Development Commissioner Maria Torres-Springer to announce a new $1.5 million pilot program to fund anti-displacement initiatives in key neighborhoods, including Inwood. Lara and Northern Manhattan is Not for Sale aren’t convinced it’s enough — even Brewer herself earlier called for $7.5 million in funding for anti-displacement initiatives.

Beyond that, Northern Manhattan is Not for Sale and other rezoning opponents are also worried about the effect of the new market-rate housing the rezoning would allow. In buildings subject to the city’s inclusionary housing ordinance, anywhere from 40 to 75 percent of the units in the buildings can be market-rate. Residents are worried that an influx of wealthier tenants will threaten to convince landlords to seek higher-paying commercial tenants serving the new population, pushing out businesses that serve existing residents. As Lara points out, small business tenants have even fewer protections than residential tenants.

Not to mention, the city’s current plans include rezoning for greater height and density along Inwood’s main commercial strips — Dyckman Street, a stretch of Broadway, and 207th Street — meaning any businesses in existing structures are at risk of losing their locations as developers clear out lower-density structures in favor of higher-density structures.

“Those businesses are the heart of the neighborhood,” says Bennett Melzak, a social worker who has lived in Inwood for 66 years, who also went on stage at the block party to speak out against the rezoning.

The timing of the block party was strategic. The city council vote on the rezoning is scheduled for August 8. As in other cities, New York City Council Members maintain a custom where each council member ultimately has veto power over zoning and other land-use decisions in their districts. In Chicago, the practice has resulted in maintaining patterns of racial segregation and concentrated poverty, as Next City reported on recently.

In his nine years on city council, Rodriguez points out, he has not supported a single rezoning — although he has come very close to it.

In 2016, Rodriguez found himself in the middle of a contentious single-lot rezoning in his council district. The city had been working with the developer to make the project happen, pushing the developer to request the zoning change in exchange for affordable housing under the city’s brand new inclusionary housing law. The developer proposed 30 percent of the units would be permanently affordable under the new law. Rodriguez got involved, negotiating additional affordable units outside the new law that would make the building 50 percent affordable, according to the city’s definition of affordable housing.

But in the end, standing in a crowd brandishing “Northern Manhattan is Not For Sale” banners in Spanish and English, Rodriguez announced his vote against the rezoning, effectively killing that earlier project.

Lara hopes they can win him over again.