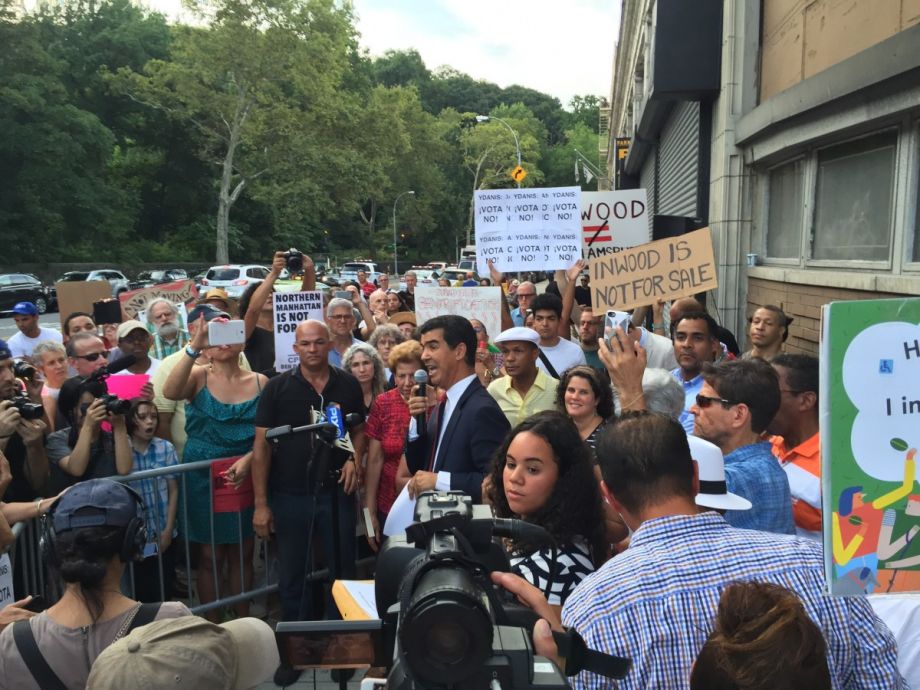 It was a steamy August evening in NYC, but the heat was even more intense on City Council Member Ydanis Rodriguez, as he arrived and fought his way to a makeshift podium through a crowd of hundreds at the intersection of Broadway and Sherman Avenue on Monday.

A developer had applied for a rezoning, allowing for construction of a new 23-story, mixed-used development on the site, currently a 2-story commercial parking garage surrounded mostly by 5- and 6-story residential buildings. The site, in northern Manhattan’s Inwood, is across from Fort Tryon Park, which includes the Cloisters, a museum constructed out of the ruins of French monasteries. The stakes were high for Rodriguez, who represents the neighborhood. The application was one of the first private developer rezoning requests to trigger the requirements of the city’s new mandatory inclusionary housing (MIH) policy.

Rodriguez initially supported the developer’s proposal. In his announcement on Monday, Rodriguez reiterated praise for MIH, emphasizing how it is the first time that the city has a policy to create privately owned, permanently below-market-rate housing. In all previous policies and models, including the use of low-income housing tax credits, privately owned below-market-rate housing has had an expiration date, typically 30 years after the tax credits are awarded.

Rodriguez’s applause for MIH got overwhelming boos from the crowd. The below-market-rate rents that MIH promises aren’t far enough below market rate for most New Yorkers. In this case, under MIH, the developer offered 30 percent of units to be affordable for 80 percent of area median income, approximately $62,000 for a family of three. The catch: HUD currently calculates NYC’s area median income using the city plus three wealthier suburban counties. So even after the council member pressed the developer to promise additional affordable units to make the building 50 percent below market rate, it still wasn’t affordable enough for the 71 percent Latino, 49 percent immigrant community with a median household income of $39,535.

So the council member reversed his position.

“We have not been able to get to a point where I feel it is in the community’s best interest to move this spot rezoning forward,” Rodriguez said at the Monday announcement. “Therefore, I tell you, at this moment, I will not be supporting the rezoning of Sherman and Broadway.”

It’s a victory for those who have been organizing under the banner of “Northern Manhattan Is Not for Sale,” such as the Metropolitan Council on Housing, a housing justice advocacy group.

The following day, during City Council’s only legislative session in the month of August, Rodriguez explained what changed his mind.

“I listened to my community, voices both for and against it, developers, members of the administration,” he said. “At the end of this process, we decided that we did not have everything in place to support a Broadway and Sherman rezoning.”

The decision could set a precedent. Private developers seeking spot rezonings of single lots may now need to think harder about what to offer the surrounding community in terms of both the quantity of affordable units as well as the depth of affordability in those units.

Some argue that such a precedent could slow down private developers looking to build more housing in a city with a chronic housing shortage. Developers, however, have investors who want them to build: NYC real estate remains one of the world’s safest, most attractive investments. MIH, with all its limitations, was designed to make sure that pressure yielded something other than 100 percent market-rate housing for the super-rich.

“I think that it was a right decision in the spirit of the community and what the community was looking for and will continue to look for in terms of making sure it has its proper share of affordable housing, and affordable to the income level of our community, not this kind of blanket affordability,” says Yvonne Stennett, executive director of Community League of the Heights (CLOTH), an NYC community development organization founded in 1952.

But that’s literally only half the story. Even with 50 percent of the units set aside as below-market-rate, the developer proposed a 335-unit building. Bringing that many market-rate rents at one time into a new, luxurious high-rise changes the market, giving landlords in nearby buildings an incentive to raise rents. In this way, even MIH can become a mechanism for displacing existing residents.

“In terms of the driving up the prices of rents around the project, that is a possibility … and if that happens, where do people go who can’t afford those rents,” Stennett says. “If private developers see the potential to do major capital improvements in their buildings and by that, drive up the rent and move the current population out, that could have been a possibility.”

Even with a higher number of rent-stabilized units (48,000) than any other community district in NYC, Inwood and neighboring Washington Heights are at risk for seeing tenants driven out. (There’s allegedly a whole playbook for how to get rid of rent-stabilized tenants.)

“There are a lot of different tactics used for driving out rent-stabilized tenants, different landlords have their favorites,” says Emily Goldstein, an organizer with the Association for Neighborhood and Housing Development (ANHD), a coalition of community development organizations and housing justice advocacy groups in NYC.

Led by council members Brad Landers, Jumaane Williams and Helen Rosenthal, ANHD is part of a working group of organizations that are pushing the city to pass a bill requiring a Certificate of No Harassment for all developers seeking permits to do renovations or construction on residential buildings. According to Goldstein, it would create a powerful disincentive against harassing rent-stabilized tenants to clear the way for new, higher-income tenants who can afford market-rate rents.

“Until there are better and stronger and more robust protections in place for existing residents of affordable and particularly rent-stabilized housing, people are going to continue to be very wary of the impact of that much new market-rate housing,” Goldstein says.

“I think our focus has to be preservation,” says Stennett, speaking broadly about both rent-stabilized and other affordable housing. CLOTH itself has a portfolio of over 50 affordable and supportive housing properties in Inwood and Washington Heights. “We are going through gentrification and we want not to displace people,” she adds.