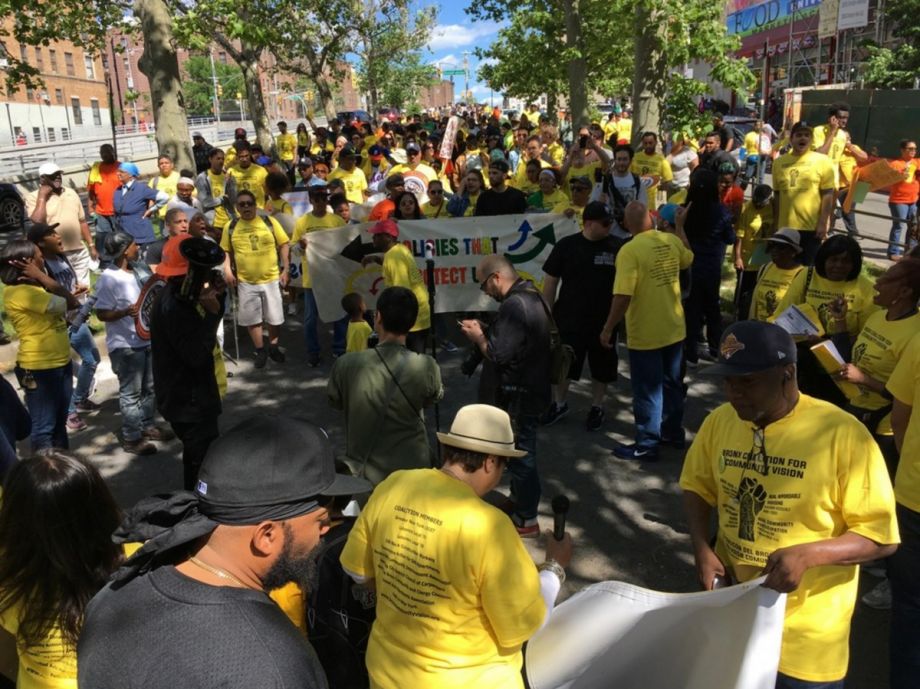 A law passed by New York City Council last week will give the city, housing advocates and tenant organizers an early warning system for potential displacement of rent-stabilized tenants.

The “Predatory Equity Bill” instructs the city’s Department of Housing Preservation and Development (HPD) to create and publish a “Speculation Watch List,” which will name buildings bought at prices that indicate a speculative purchase and potentially signal future harassment and displacement of current rent-stabilized tenants, especially those who are low-income.

Of the city’s 3.4 million housing units, around 1.2 million are rent-regulated, rent-stabilized or rent-controlled.

The bill passed the same day that City Council also voted to expand NYC’s Certificate of No Harassment Program, another measure to protect renters. Earlier this year, the city passed a raft of 18 other tenant anti-harassment bills, which included the creation of new monitoring offices and clearer definitions of what constitutes tenant harassment. NYC also established a right-to-counsel for tenants in housing court in 2017.

“The city is working on multiple fronts to stop tenant harassment in its tracks, and to protect residents from the looming threats that predatory investment poses to communities,” said Housing Preservation and Development Commissioner Maria Torres-Springer in a statement announcing the Predatory Equity Bill. “The new Speculation Watch List harnesses the power of data to identify sales that signal the potential for harassment and distress, adding yet another tool to our multifaceted approach to combat tenant harassment and safeguard affordability for our city’s residents.”

The Predatory Equity Bill authorizes HPD to finalize the criteria for making it onto the speculation watch list, and to revise that criteria in the future. The primary factor: a building’s capitalization rate, or in other words, its rental income divided by its most recent acquisition price. If the price is too high, only a market-rate building could feasibly provide enough rental income to pay back the loan the developer used to buy the building. A low capitalization rate is thus a strong indicator that a developer made an acquisition with a plan to a flip a rent-stabilized building into market-rate housing — a process that often involves harassing tenants into vacating units.

“There wasn’t a perfect metric on this, but it’s a really good first step and pretty novel,” says Jackie Del Valle, coordinator of Stabilizing NYC, a citywide coalition of 17 nonprofits that organize tenants in rent-stabilized buildings. “It’s really saying you know what, you guys paid too much for this, you’re gonna push out tenants. This business model needs to stop. I think that’s really exciting.”

Founded in 2013, Stabilizing NYC worked with two council members, Daniel Garodnick and Ritchie Torres, to draft and shape the legislation, along with HPD.

In addition to organizing tenant associations in rent-stabilized buildings, Stabilizing NYC (which gets most of its funding from City Council) also researches how many tenants are under threat from “Predatory Equity” — the term coined by tenants and housing activists in NYC to describe the investors, typically backed by private equity including hedge funds, who allegedly began engaging in this pattern in the mid-2000s. Around 65,000 rent-stabilized units are currently under threat of displacement due to predatory equity, according to the coalition.

Garodnick, who is term-limited and leaving office after this year, also had his office publish a study of predatory equity patterns and practices.

“During the pre-2008 housing boom, real estate around the country attracted new kinds of investors,” the study reads. “These investors applied creative, and often dangerous, techniques to buying and selling debt on their transactions, and as prices continued to skyrocket, they gained more confidence in riskier deals.”

Many of those riskier deals, according to that study, ended up being acquisitions of rent-stabilized buildings housing many low-income tenants in NYC, with the intent of flipping them into market-rate units. The city’s rent-regulation rules were amended in 1994 to make it much easier to do so.

According to the NYC Rent Guidelines Board, which regulates rent-stabilized and rent-controlled buildings in NYC, 147,457 rent-regulated units have been lost through what’s known as “high-rent vacancy deregulation,” or when a rent-stabilized tenant leaves and the landlord has the option to raise the rent to market rate. Of those, 60,994 units were lost from 2007 to 2011.

They weren’t all lost because of predatory equity, but Del Valle, who was previously a tenant organizer in the Bronx going back to 2006, remembers seeing many of those units lost to such investors.

“Landlords have always harassed tenants, but with these companies and the resources they had, we were seeing whole buildings of tenants being brought to housing court,” Del Valle remembers. “And it never went away. Some companies stayed the whole time, new ones came in. The recession, bankruptcies of some doing these deals, were not a deterrent.”

Del Valle, as well as Garodnick and Torres, hope a little sunlight will help deter some of these deals while also helping to identify where to focus limited resources on organizing tenants and investigating harassment claims.

“Buildings that appear on this list can be prioritized by HPD for affordability preservation programs and for enforcement of related housing laws,” Garodnick and Torres wrote in an op-ed for City and State.