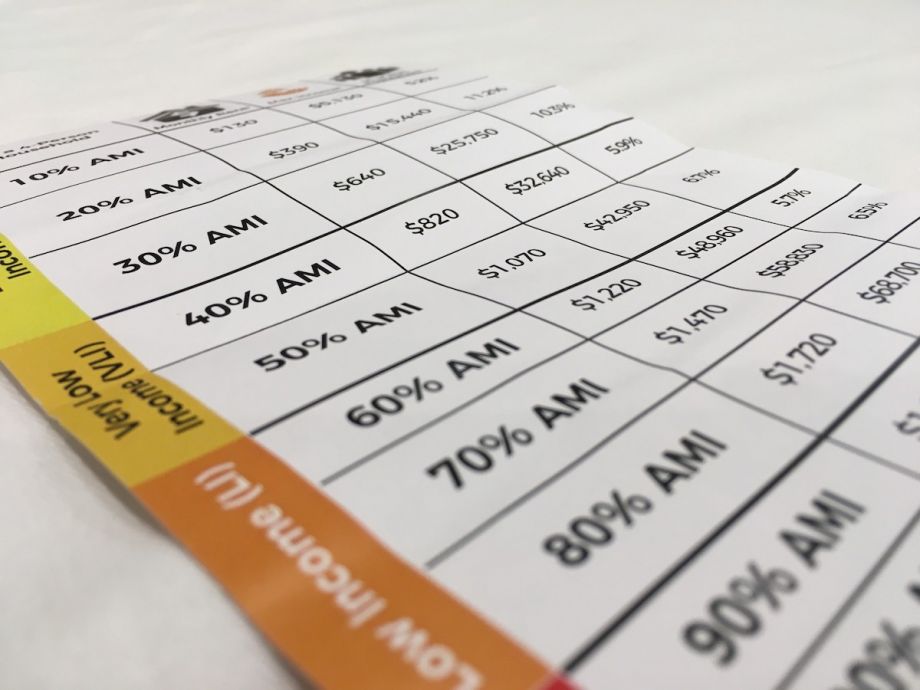 It is a rallying cry at tenant organizing meetings and community planning meetings, and sometimes during marches around New York City. In church basements, community centers, schools and City Hall, someone, perhaps a council member, perhaps a developer, perhaps a community development corporation, touts a new “affordable housing project.” Not too long ago, there might have only been cheers and applause. But, these days, the refrain is becoming familiar and louder: “Affordable for whom?”

The question has to do with how the federal government calculates the affordability of housing across the country, using what’s known as area median income, or AMI. Even though the official terminology can be different at the local or state level versus the federal level, the concept is broadly the same: Housing should cost no more than 30 percent of a household’s monthly take-home pay.

The newly updated AMI Cheat Sheet from the Association for Neighborhood and Housing Development in New York City maps out the bottom line: for a family of four, what’s defined as affordable rent, the associated income with that rent, and the percentage of NYC population that lives within each income band.

If you are a math nerd, you may notice quickly that the numbers don’t make sense. The median, mathematically, is supposed to be the midpoint of the entire distribution. Half the population should be making more than the median income, and half should be making less. But as the cheat sheet lays out, 64.1 percent of NYC’s population lives at or below that number. Why is more than half of the city’s population earning at or less than what’s considered median household income?

Despite what you might expect, the answer is surprisingly simple: Because in its official calculations of NYC’s median income, the U.S. Department of Housing and Urban Development includes three wealthier, suburban counties north of the city. Adding those counties into the calculation for median income skews the official figure toward a wealthier population.

That skew, which is not the fault of any one developer or council member, is the reason why developers and council members are often finding themselves in the hot seat at meetings around NYC, as well as in other cities around the country. They are touting affordable housing projects on paper that don’t meet the real affordability needs of the city. Many of those projects are also getting support from city subsidies or below-market-rate loans from the city, as part of Mayor Bill de Blasio’s 10-year plan to build 80,000 new units of affordable housing.

The members of the Bronx Coalition for a Community Vision penciled out one example looking at an area of the South Bronx where the city plans to rezone the neighborhood to build more housing, some of it affordable. With the help of a loan/subsidy package from the city, 75 percent of the new units built would not be affordable for the current neighborhood residents. In what is technically the best-case scenario using current programs, 10 percent of the units built would be regulated for households earning no more than 30 percent AMI — but 52 percent of the existing residents in the neighborhood live at 30 percent AMI or below.

Hence the question: Affordable for whom? Often the response from city officials and developers alike is that there’s unmet demand for housing all across the income spectrum. While that may be true, it doesn’t quite answer the question of whether housing can be truly called “affordable” if it’s not affordable for the people who currently live in the neighborhoods where the city is subsidizing private developers to build it.

The Bronx Coalition worked with community-based affordable housing developers to create and propose a new loan/subsidy package that would more closely reflect the current demographics of the neighborhood. Council Member Vanessa Gibson told the coalition in an April public meeting that she supports the creation of their proposed new loan/subsidy package, though it is not in her direct power to make it happen. That is a question for the city’s Department of Housing Preservation and Development.