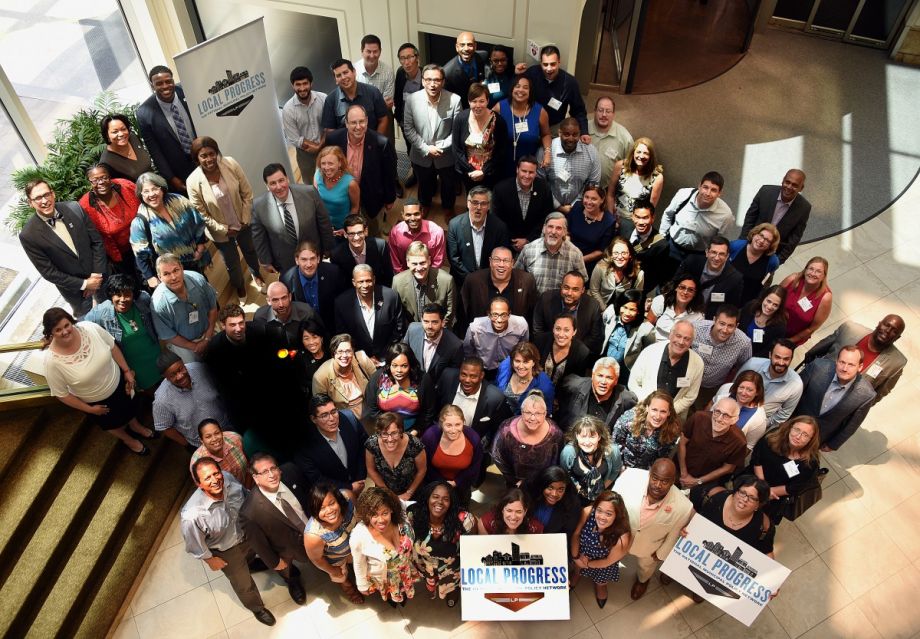 This has been an incredibly disturbing election year: to a degree unprecedented in our lifetimes, hatred and xenophobia are being marshalled to support a reactionary nationalistic agenda. As leaders of Local Progress, a network of more than 500 progressive elected officials from cities and towns across the country, we stand together in support of a positive vision to make America great: economic inclusion, racial and gender equity, sustainable communities, and good government that serves the public interest.

This week, as Republicans and Democrats gather for their national conventions, Local Progress is releasing a national platform of our own. We adopted the platform on July 9 in Pittsburgh at our Fifth Annual Convening, which was attended by over 100 local elected officials from around the country and hosted by Pittsburgh Mayor Bill Peduto.

Our platform lays out a series of practical and transformational steps that the federal government can take to promote strong, equitable cities. On an array of issues – from affordable housing and environmental protection to workers’ rights and police reform – we’ve identified strategies Congress and the executive branch can take to support, incentivize, and collaborate with local government officials like us who are trying to help our constituents build dignified and secure lives. You can read our full platform here.

With conservatives in control of Congress and a large majority of statehouses, many of the most important policy developments in recent years have come from the local level. In our cities of Minneapolis and New York, for example, we’ve passed paid sick days laws that guarantee workers time off to care for themselves and their loved ones. Earned sick time is a worker rights issue, but it’s also about gender and racial equity, because those previously lacking paid sick days are overwhelmingly women and people of color. Our cities are also confronting the affordable housing crisis with inclusionary housing laws; pushing for reform of our police departments to eliminate discriminatory policing and keep our communities safe; and shifting budget priorities to invest in the infrastructure, programs and services that help all of our constituents thrive.

These city policies have transformed the national discourse. Hillary Clinton’s support for a higher federal minimum wage is a testament to the power of the workers, community-based organizations, and policy advocates who set such a worthy goal and to Sen. Bernie Sanders, who did so much to build momentum for the issue and pull her along. But it’s also a testament to Seattle, San Francisco, Los Angeles, Washington DC, and other cities that have actually passed $15 minimum wages and are shifting the boundaries of mainstream discourse. The members of Local Progress have been at the frontlines of these fights in cities around the country, and we are proud to stand in the trenches with constituents who are working so bravely to build a more just society.

But the fact is that we cannot do it alone. The devastation wrought by the water crisis in Flint brought national attention to a reality being felt across the country: localities are starved of the resources they need to provide crucial services for their residents, particularly for low-income families and communities of color. As public servants, we believe in the power of government to improve the lives of our constituents. However, too often federal and state governments are an obstacle, not an aid, to advancing local policies that address these urgent issues.

In too many states, cities do not receive the financial resources they need to build strong schools, run proper public transit systems, or keep parks clean and safe. And we are often prohibited from passing laws to raise the revenue we need. Beyond financial constraints, many states are preempting cities’ ability to pass common sense regulations: smart gun safety laws, livable wages for workers (a limitation that affects New York City), and a just transition to a clean energy economy.

In short, we need the federal government to help us. Here are a few examples, drawn from our platform, that show how the next Congress and Administration can help city governments make a huge difference in our constituents’ lives:

The Department of Education can double down on investments in community schools that have been proven to reduce inequities, as well as restorative justice programs to help end the school-to-prison pipeline. And it can evaluate for-profit charter schools to determine whether they are exacerbating segregation and adhering to basic standards of accountability.

Congress can support the creation and preservation of affordable housing with a significant expansion of the Section 8 voucher program and public housing, as well as a stronger commitment to programs that prevent homelessness. And the Department of Housing and Urban Development can ensure the distressed mortgages it sells help the community – rather than Wall Street speculators.

The Department of Transportation can partner with cities to strengthen Vision Zero and “complete streets” initiatives that improve access to public transit and prioritize safety, sustainability, and racial and economic equity.

The Department of Labor can collaborate with cities to enforce labor standards and respond to the challenges created by the on-demand economy.

And, of course, the federal government must help eliminate the racially disparate impact of local policing and criminal justice systems. The Department of Justice should strengthen its oversight of local police departments, ensure that special prosecutors conduct investigations of alleged police misconduct, and curtail the transfers of military equipment to local departments. And it should incentivize the creation of alternatives to incarceration such as mental health and addiction services in both states and localities.

More than ever, we need strong cities and strong city leaders. The truth is that, right now, Congress is not working for the American people. Cities are leading the way, and will continue to do so. We hope that next year, with a new Congress and a President committed to inclusion, equity, and shared prosperity, Washington DC will give our nation’s cities the support we need to promote genuine social justice for America.