How to Pay America’s Big Sewer Bill – Next City 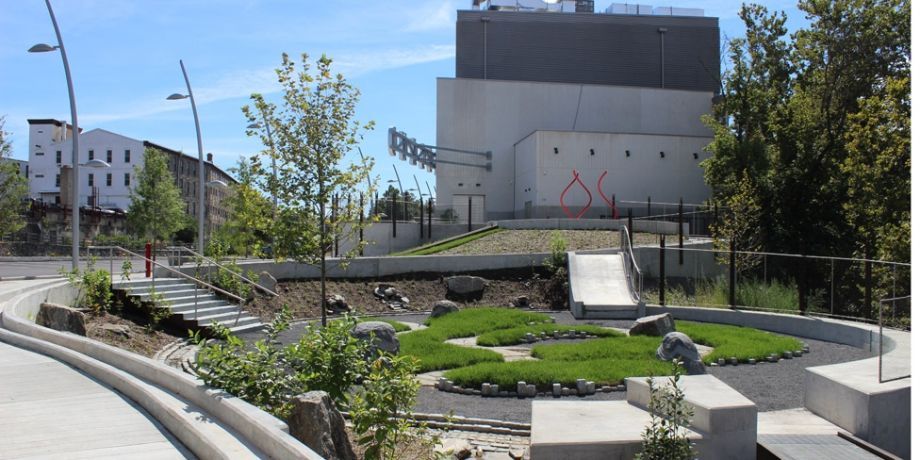 Dozens of U.S. cities are facing price tags in the millions or even billions to remediate their combined sewer systems, which currently channel stormwater and household waste into the same pipes, risking untreated wastewater flowing into waterways during heavy rain.

Though the EPA mandates that cities eliminate these combined sewer overflows (CSOs) to comply with the Clean Water Act, cities are largely left to fund these expensive remediation projects on their own — through federal loans that must be repaid, or increased residential sewer rates.

“Clean environment is sort of like motherhood and apple pie. You tell somebody we’re in favor of clean water and they’re like, ‘that’s a good idea.’ So we pass these laws that say you have to clean up your water, but no one really assesses the cost to these communities of implementing these regulations,” says Aaron Renn, senior fellow at the Manhattan Institute, a right-leaning think tank, and author of a new report that suggests policy changes to help cities comply without saddling them or their residents with debt.

Many of these systems, some of which date back to the mid-1800s, are located in the Midwest and industrial north. The mandates, while necessary and well-intentioned, leave cities and their residents doubly burdened: Many of these same cities are still reeling from high unemployment atop of entrenched poverty. And the rate hikes disproportionately burden low-income residents, who spend a greater percentage of their paycheck on bills.

The report, “Wasted: How to Fix America’s Sewers,” suggests a revision of EPA affordability guidelines, modified sewer rate structures, enhanced state and federal aid, and a more aggressive shift to green infrastructure, which could mitigate the problem by preventing or delaying stormwater from reaching the sewers.

“I began thinking about a lot of these cities in the Rust Belt that have not come back and what are the things that hold them back from being able to be more competitive again,” says Renn. “If we’re going to help these cities, one of the things that can be done is help them address these big environmental liabilities that are on their plates.”

CSO remediation is not the only unfunded mandate struggling cities face, but it’s one of the most invisible. Chicago and Detroit have received ample press for their unfunded pension crisis, “but these sewer projects are sort of just viewed as things in the background and a lot of people don’t realize how much money is being spent on combined sewer remediation,” says Renn.

By the EPA’s estimates, the costs are staggering. The projected expense of remediation in just 31 U.S. cities totals $29 billion. The price tag is estimated at $4.7 billion in St. Louis alone. Cleveland’s compliance plan will cost $2.7 billion. That’s a quarter of the city’s entire general fund operating budget — and four times its $719 million unfunded pension liability. 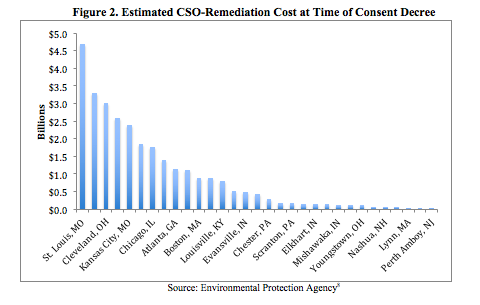 Though certain grants and other forms of aid are sometimes available for these projects, most cities are paying for the repairs by issuing bonds backed by rate increases. “[A rate hike] doesn’t seem like a tax increase, which in effect it actually is,” says Renn — a regressive one.

“Your sewer bill is sort of a rounding error to someone with a six-figure income,” but it can be a significant portion of a lower-income household’s paycheck. Some cities offer discounts to qualifying households, but “half a bill that’s doubling is still doubling,” says Renn. “That’s not my idea of environmental justice.” 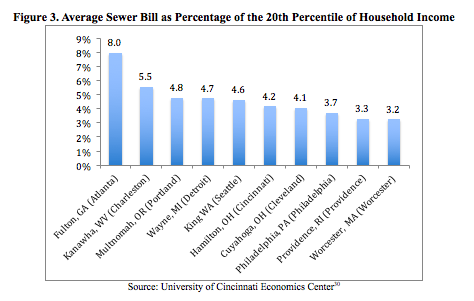 Cities are trying to comply in a variety of ways. Some are increasing treatment capacity; some are trying to separate the pipes into two systems. (A 2014 brief from the Natural Resources Defense Council noted that water conservation also can play a role.) Some cities are even constructing massive underground tunnels that will temporarily store excess wastewater until it can be treated.

Renn points to Philadelphia’s Green City, Clean Waters plan as exemplary of this approach. The city is the first to try to meet CSO regulations primarily through green infrastructure. The approach isn’t cheap — Philadelphia will spend $2.4 billion over 25 years — but it shows results sooner and confers other benefits in the process.

Renn would like for the EPA to more aggressively support such alternative solutions, and for state governments to provide technical expertise to smaller communities that may not have the resources to experiment with new technologies on their own.

His report also suggests more flexibility to redirect existing funding streams to these CSO remediation projects. Without support from the state or federal level, “it makes really no economic sense,” says Renn, for cities to undergo these projects. “It’s not like there’s going to be some massive number of new jobs in your city if you fix the sewer issue. It’s more we’ve decided it’s the right thing to do, and if that’s what we’ve done as a society, then we should pay for it that way, as a society.”