Planning for a Midwest of More Frequent Storms – Next City

Planning for a Midwest of More Frequent Storms 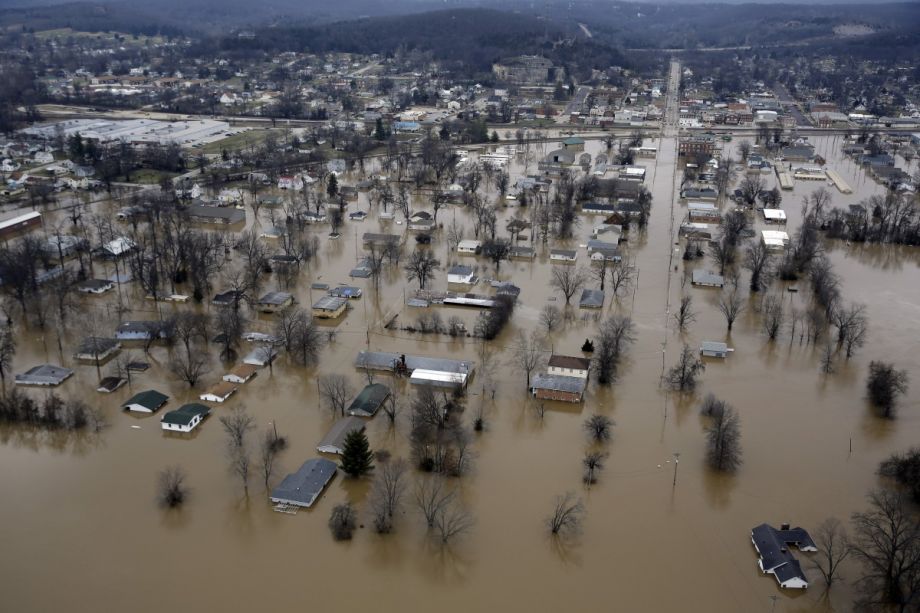 Last month, Missouri and parts of Illinois experienced historic rainfall and disastrous flooding. Between 9 and 14 inches fell in the Midwestern states over three days, shutting down interstates, flooding houses and causing over 25 deaths. According to the National Weather Service, a storm this severe only drenches the U.S. every 100 to 300 years.

But that could be changing. The frequency of very heavy rainfall events in the Midwest has been increasing for the last half decade and is projected to continue to rise. Between 1958 and 2012, the Midwest experienced a 37 percent increase in their frequency, second only to New England, which experienced a whopping 71 percent increase, according to the U.S. Global Change Research Program.

These increases don’t necessarily mean that more precipitation is falling overall, but rather that a greater percentage is falling in very heavy downpours. Last month’s storm was historic. But any such heavily concentrated precipitation tends to overwhelm both natural and manmade systems, posing a challenge for stormwater management and demonstrating the urgent need for cities to adapt.

The plant in Fenton, which normally averages 6.75 million gallons of flow per day, was treating 24 million gallons when it malfunctioned, says Sean Hadley, a spokesperson for the MSD. The city of St. Louis has a combined sewer and stormwater system. Both the volume of rain and a breach of river water sent the Fenton treatment plant over its limit.

“We knew the rains were coming. It wasn’t a matter of if we were prepared for the rains or not. The volume of rain and the frequency, how fast it fell in a short amount of time caused a heavy saturation in the ground, which led to ultimately the St. Louis region suffering floods,” says Hadley.

“Our system worked like it was supposed to, with the result that we lost two water treatment plants.”

The Grand Glaize plant flooded when the river crested an impromptu sandbag levee around the facility. For several days, both plants were diverting raw sewage into the Meramec. As of this week, Grand Glaize is operational again, pumping partially treated water. The Fenton plant is not likely to open for several more weeks.

Hadley says, in addition to getting these treatment plants back online in the short term, the MSD has committed to spending over $4.5 billion in infrastructure improvements over the next 20 years. Part of that initiative will be to decouple the stormwater and sewer systems, particularly in residential areas.

The initiative also includes building stormwater storage tunnels to increase treatment plant capacity, and green infrastructure like rain gardens and permeable pavement. All are still in the design and planning stage. (An overhaul of the public spaces surrounding the city’s iconic Arch has considered flooding resilience in its design.)

As St. Louis implements these improvements, they could look upstream. Minneapolis also sits on the Mississippi River and one of its tributaries, the Minnehaha Creek.

A recent study there examined the capacity of both a dense, developed neighborhood in south Minneapolis and a developing neighborhood in the nearby town of Victoria to adapt to a future of more frequent extreme weather events.

Conducted by the Minnehaha Creek Watershed District, in partnership with Syntectic International, Antioch University New England, the University of Minnesota, and the cities of Minneapolis and Victoria, the study focused on changes in the “10-year storm”: the amount of rainfall in a 24-hour period that has a 10 percent probability of occurring in a given location in any given year.

In Minneapolis, that’s about 4 inches. With extreme precipitation events occurring more frequently, the magnitude of that 10-year storm could increase by anywhere between 10 and 150 percent. In the most extreme case, that’s 10 inches of rain — the same amount to hit Missouri and Illinois last month.

Telly Mamayek, director of communications and education for the Minnehaha Creek Watershed District, says the study demonstrated that even in the worst-case projections, Minneapolis’s stormwater systems were, for the most part, adequately prepared: “It’s not doom and gloom. There are options. What we have is working to a degree and there are things we can do.”

To increase engagement in the study, “we convened a group of decision makers, thought leaders from the local communities, who assessed what are the biggest challenges we face in stormwater adaptation,” says Mamayek.

According to a Minneapolis Water Department rep, besides education and awareness of the problem, the biggest challenge in Minneapolis is flooding in low-lying areas.

Like St. Louis, Minneapolis was built with a combined stormwater and sewer system, but the city has been working to separate them since the 1960s. Where sections of combined system do remain, the city has a five-year plan to eliminate them.

Many recommendations came out of the study, including above- and below-ground storage and increased pipe diameters. Both Minneapolis and Victoria have implemented some of these changes already. Mamayek says the greatest outcome, though, has been the creation of a guide, “Community Adaptation Planning for Changing Landscapes and Climate,” which outlines Minneapolis’ process such that other communities can undertake it themselves.

“These storms are increasing in frequency and intensity. Our stormwater management systems are not designed to accommodate these increasingly intense frequent storms. And we need to turn to our community members and our leaders to find solutions that will work for us,” says Mamayek.