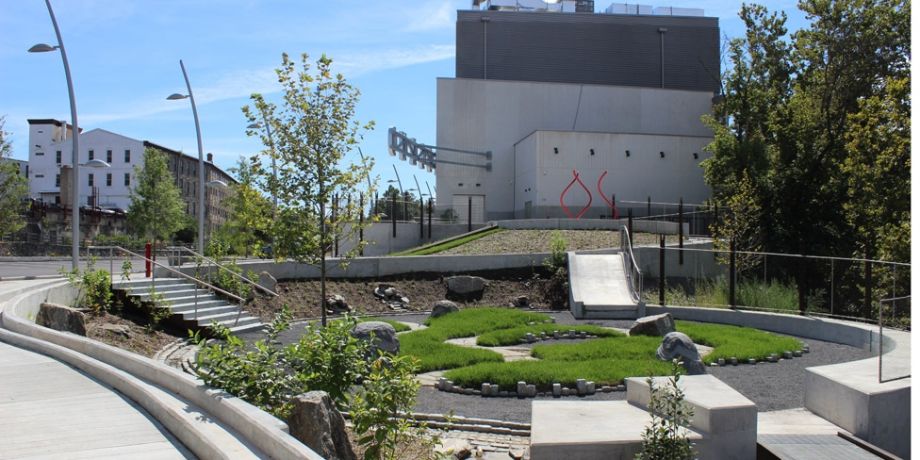 Venice Island is a piece of infrastructure that doubles as a public park and theater. (Photo by Philadelphia Water Department)

It may have been the first time the opening of a sewage overflow tank – because that’s what’s underneath this sleek modern arts facility on the Schuylkill River — has been celebrated by adding lyrics about water infrastructure to a hit from hip-hop superstar Drake.

But Venice Island, which will play an important role in managing stormwater in Philadelphia’s flood-prone riverfront Manayunk neighborhood, is hardly an ordinary piece of water infrastructure.

Yes, it incorporates that underground storage tank, which can hold up to four million gallons of overflow during heavy rainfalls, keeping raw sewage out of the Schuylkill. But the $45 million project also encompasses a theater, a spray park, a basketball court, and an outdoor amphitheater. It has a green roof and is surrounded by rain gardens that capture storm runoff. 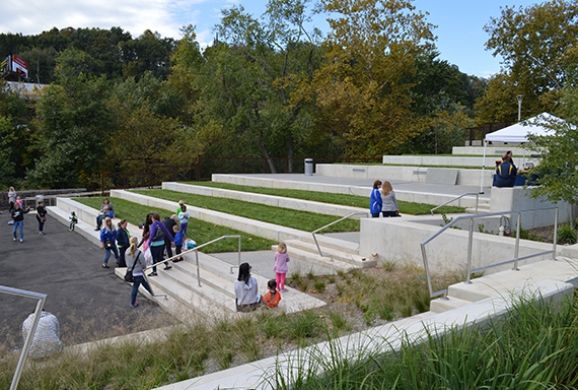 The Venice Island facility is just the latest and most visible manifestation of Philly’s Green City, Clean Waters program, a 25-year, $2.5 billion initiative spearheaded by the Philadelphia Water Department that is changing the way the city manages its stormwater. The result of a groundbreaking agreement among the city and the U.S. Environmental Protection Agency, Green City, Clean Waters is emerging as a national model for how to go green from the bottom up. Crucially, the program involves both the public sector – led by the Philadelphia Water Department and Mayor Michael Nutter’s office of sustainability – and private landowners as well as neighborhood groups, residents and even schools.

The idea is that multifaceted green stormwater infrastructure solutions such as those seen at Venice Island are less costly and pose fewer risks than traditional infrastructure projects, which tend to address one problem by, for example, putting in new sewer tunnels, but ignore the larger environmental and urban context. “Instead of increasing the capacity of our existing system, we’ve decided to reduce the demand on our system,” says Howard Neukrug, commissioner of the Philadelphia Water Department (PWD). It’s a more holistic approach to a city’s plumbing.

The widespread implementation of green stormwater infrastructure also promises what city officials like to tout as a “triple win” for Philadelphia: a cleaner environment; cost-effective stormwater solutions that provide jobs for local people; and a social fabric reinforced by better neighborhood parks and public spaces. Another benefit is that unlike pipes known only by engineers, many elements of green infrastructure can be seen and tended by the entire community.

Rain gardens and flow-through planter boxes at Springside School manage stormwater runoff from impervious areas on school grounds. The project design was funded by the Schuylkill Watershed Initiative Grant and its implementation completed by the school. (Photo by Philadelphia Water Department)

Philadelphia might not be the first city that comes to mind when you think about problems with managing flooding. It is, after all, buffered from the rising waters of the Atlantic by a sizable chunk of southern New Jersey. But Philly is a river city, defined by its relationship to the Schuylkill, which runs right through it, and the Delaware, which forms its eastern boundary.

In sections of the city developed on the riverbanks, floods are an all-too-real threat – as is evidenced by the high-water lines at the Manayunk Brewing Company, a local bar on the Schuylkill that flooded during Hurricane Irene in 2011 and Hurricane Floyd in 1999.

Philadelphia is also an old city, which means that much of its infrastructure was built during a time when no one worried much about dumping pollutants in the surrounding waterways. While some of Philly’s stormwater is treated separately from its wastewater, many parts of the city have what is known as a combined sewer overflow (CSO) system, where sewage and stormwater are mixed and treated together. That means that when a lot of rain falls all at once, the treatment plants are overwhelmed. Then raw sewage and polluted runoff gets dumped into the rivers, which are a source of drinking water and an increasingly important recreational destination for 21st-century Philadelphians.

While New Orleans doesn’t have a combined sewer overflow system, it does have a stormwater flooding problem. That’s why a delegation from the southern city, including councilmembers, and city planners, had Philadelphia on its agenda as part of the Urban Water Series, a two-year educational partnership of the Greater New Orleans Foundation, the Urban Institute, Surdna Foundation and others. [Surdna supports Next City’s coverage of green infrastructure, including articles like this on water infrastructure.] As part of the series, the New Orleans group, along with a roving Next City correspondent, will visit Milwaukee to study how the city is handling its stormwater. Earlier this fall, the group visited Austin.

On their two-day visit, the New Orleanians toured a spectrum of green stormwater infrastructure in different parts of the city. They also heard about the more controversial parts of the Green City, Clean Waters program.

Installing porous pavement, stormwater inlets, rain gardens, and underground infiltration beds that capture heavy rainfall — all of which the New Orleans delegation saw at parks, recreation centers, and schools around the city — is relatively easy compared to asking property owners to pay a separate fee for their stormwater treatment.

But that’s exactly what the Philadelphia Water Department started doing with commercial properties as part of Green City, Clean Waters.

Before the plan was implemented, Philadelphia property owners got a water bill that covered what came out of the tap and what went down the drain or the toilet – a typical arrangement in many cities. The size of the bill depended on the size of the water meter (industrial customers who use a lot of water have bigger meters, for instance), and there was no accounting for the amount of water that ran off the paved surfaces of the property.

The new program changed all that, imposing a stormwater management service charge for all PWD customers.

For residential users, that means a minimal flat fee that is based on the average runoff from all residential properties in the city.

For some commercial property owners, this meant a jump in their monthly water bill of as much as 1000 percent. Think of someone running a big parking lot, for example, who had previously been billed only for the water it took to run a single toilet and sink a few times a day. Suddenly the rain sheeting off the asphalt during a summer thunderstorm became something that had to be paid for — quite literally, money down the drain.

It was a big change and a completely new way of thinking about how one’s property effects the rest of the city. Accordingly, the fees for commercial owners were phased in over a period of years and those owners who installed green stormwater infrastructure to mitigate runoff qualified for help from the city — assistance that was initially offered in the form of loans, and later through competitive grants of up to $100,000 per acre managed. Today, green infrastructure qualifies property owners for stormwater credits that offset their monthly bills.

For new developments that disturb more than 15,000 square feet of earth, stormwater management must be integrated into building plans, and stormwater infrastructure approval is baked into the permitting process. Property owners who install the infrastructure also must enter into an agreement to operate it and maintain it as long as they own the parcel – an agreement that is tied to the deed and is binding to a new owner. Everyone who wants to do business in the city must be part of solving its stormwater challenges.

Philly’s vision is to be the greenest city in the U.S. (Photo by Philadelphia Water Department)

Green infrastructure, after all, needs to be cleaned and maintained just like old-fashioned gray infrastructure. Beyond the deed requirement, the water department is taking active steps to ensure that the pipes stay clear and trash doesn’t pile up in rain gardens — it’s partnering with other city agencies, neighborhood organizations, parks supporters, and youth-employment programs to make sure the work is done. Schools with green infrastructure on the grounds must train maintenance staff in how to properly care for the new plantings, grates, and pipes that channel water into the ground rather than the sewer. In neighborhoods, volunteers distribute free rain barrels and help install downspout planters, yard trees and porous pavement.

All of this is happening for good reason —  Mayor Michael Nutter and the current leadership at the water department may have gotten Green City, Clean Waters off the ground, but unless its ideals, values, and requirements are fully embedded in Philly’s civic DNA, it won’t succeed in the long term. The cultural shift must extend far beyond the boundaries of City Hall.

“We’re becoming a land-management utility,” says PWD’s Neukrug. “But only for a short time. The purpose is to get out of this business. Because we want city planning to be strong, and for them to do the planning. We want regulations, incentives, policies in place so that it’s not the water department that is designing the street or designing the building or the rain garden. That needs to be done by public or private entities. And so we’re leading the way, we’re demonstrating, we’re innovating, putting things in place. But then we’re stepping back and letting others take over…. We just need to lead the way and recognize that rainwater is a resource, it’s not a waste product.”