Report: Green the City, Deal With the Stormwater – Next City

Report: Green the City, Deal With the Stormwater 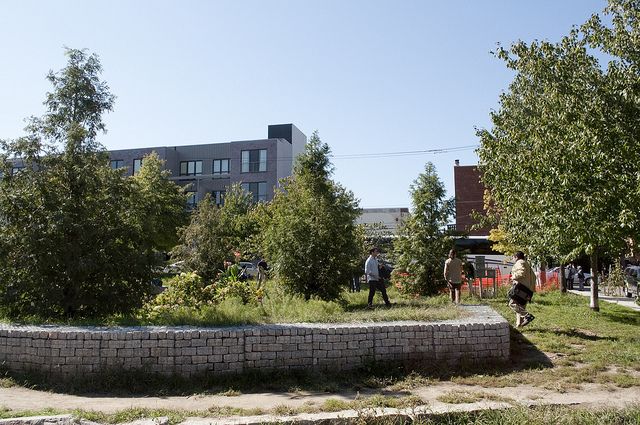 In 2012, the world experienced the second-highest number of extreme weather events in more than a century. (Remember Frankenstorm Sandy?) Increased rainfall, wind and flooding cost cities around the world billions of dollars in damages to streets, transportation networks, buildings and infrastructure.

The question being asked by everyone from New York Mayor Michael Bloomberg to South Delhi Mayor Savita Gupta in India is how should we rebuild — just as crucially, how do we pay for the green infrastructure needed to adapt to a changing climate?

Today, a report released by a new collaborative called NatLab (that’s a collaboration between the Natural Resources Defense Council, The Nature Conservancy and the investment firm EKO Asset Management Partners) attempts to answer those questions.

“Climate science indicates that we need to be prepared for more rainfall in many areas, and more frequent extreme weather events, which impact both economic and public health,” said Charlotte Kaiser, director of innovative finance for The Nature Conservancy. “Optimizing green solutions through public and private investment will deliver significant returns through risk reduction, lower cost, and other benefits.”

Let’s back up for a minute: Under the Clean Water Act, nearly 800 communities nationwide must take steps reduce sewage runoff. About 13 billion gallons of sewage and polluted runoff flow into Philadelphia region waterways each year, according to the report. Nationwide, almost 10 trillion (with a T) gallons of dirty water run into local waterways thanks to urban runoff.

Different cities are taking different approaches to comply with the Clean Water Act, but Philadelphia was the first to try using green infrastructure as its main strategy for meeting the standards imposed by the law.

Now Philadelphia and NatLab are looking to make Green Cities, Clean Waters more financially sustainable by getting private investors to help foot the bill. Public-private partnerships have already proven popular as a way for cities with strained budgets to find the money to pay for urban parks and other infrastructure improvements.

One way to grow the pot, the report recommends, is to entice more private stakeholders, from local businesses to building owners and developers, to take charge of local greening efforts. For instance, certain areas of Philadelphia have clusters of big-box stores and suburban-style strip malls, replete with parking lots. If the city could incentivize property owners along, say, Aramingo Avenue in Northeast Philly to replace some of the asphalt with porous pavement — which would capture stormwater on site, rather than direct it into the local stormwater system — it would give an extra boost to the water department toward its goal.

Given how much new building will occur in Philly over the next quarter-century, another key strategy is to get developers on board with making sure that green infrastructure is a part of a given site from the outset. It’s estimated that new developments, now required to meet certain on-site stormwater management standards, will account for about one-third of the green space eventually created under Green Cities, Clean Waters.

The report doesn’t give any specific dollar amount for how much bringing private investors into the fold will save the city. Alisa Valderrama, senior project finance attorney at the NRDC and one of the report’s authors, said that the idea is to lay out an arsenal of strategies that Philly, and other cities across the U.S., can use to attract private investment for green infrastructure (and comply with the Clean Water Act) while spending less money.

More and more cities are turning to green space as a tool for stormwater management. New York City alone plans on dedicating $1.6 billion to green infrastructure over 20 years. Los Angeles will try to invest $200 million within the next two years, while Detroit, Portland, Ore. and Kansas City, Mo. all have green infrastructure investment targets of between $50 million and $80 million for the coming years. Philadelphia will make an estimated public investment of at least $1.67 billion over the next 25 years in stormwater retrofit projects.

The sheer volume of the work presents an opportunity for private investors.