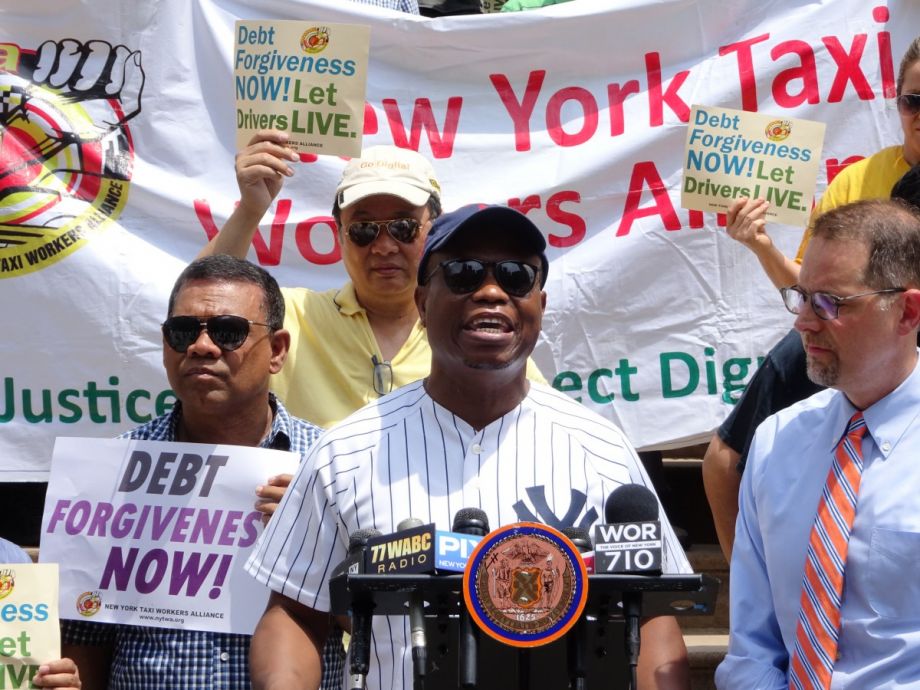 Mouhamadou Aliyu was sold the American Dream. But that dream was built on a lie.

Aliyu emigrated from his native Cote d’Ivoire to the U.S. in 1993, initially finding work in a warehouse. He started driving a yellow taxicab back in 2001, for one of the city’s infamous yellow taxicab fleets, with their extravagant and sometimes criminal owners. Fleet operators have accumulated hundreds, even thousands of the city’s licenses to operate a curbside hailing vehicle. A piece of tin affixed to the hood of each car, the licenses are more commonly called taxi medallions. The city estimates there are 3,423 taxi drivers who own their own medallions — and Aliyu is one of them.

The taxi medallion system has always had a hard cap. When it was created in 1937, there were 16,900 medallions. Due to economic conditions at the tail end of the Great Depression, the number soon fell to 11,787, and it stayed there until 1996. Today there are 13,587 taxi medallions. The artificial cap turns each into a tradable asset that drivers, fleet owners, and nowadays even hedge funds buy and sell on the open market.

When the city decides to increase the number of medallions, it holds an auction, as it did in October 2004, when Aliyu purchased his. There was no such thing as Uber or Lyft at the time. Like most medallion owner-drivers, he coughed up his life savings for a down payment, $20,000 in his case, and took out a loan for $331,472 to finance the purchase. But little did he or any of the 116 other successful bidders know that the prices they’d paid were already being arbitrarily inflated thanks to predatory lenders and a city with a $3.8 billion budget shortfall, as the New York Times reported earlier this year. New York City taxi medallion prices would peak at more than $1 million in 2014 before crashing — hard. In June 2019, one taxi medallion sold for just $125,000.

Add years of declining revenue for taxi drivers because of new competition from ride-hailing apps — which didn’t exist when many of these taxi drivers bought their medallions — and you’ve now got a crisis. Yellow taxicab drivers got loans to purchase medallions at prices that were artificially inflated far beyond their actual asset value, and now drivers’ ability to earn enough to cover those loans is degrading by the week. An estimated 95 percent of yellow taxicab drivers are immigrants, like Aliyu, who led a group of 50 or so drivers in chants last week at a July 11 city hall rally to demand New York City make right by the drivers it helped push into taking out predatory, hyper-inflated loans.

“My dream was just to be a medallion owner,” Aliyu says. “Even if I sell it now I won’t get enough money to pay off what I owe.”

In response to the New York Times multi-part exposé on the taxi medallion loan crisis, the city initiated a 45-day investigation, during which city staff from three agencies reviewed 5,513 pages of records, conducted and analyzed a survey of taxi drivers who own their medallions, and held outreach events in each of the city’s five boroughs. Authorities have made one arrest so far — of a notorious debt collector charged with pretending to be a city law enforcement official to intimidate yellow cab drivers.

“The city has a moral obligation, the banks have a legal obligation,” Bharavi Desai, executive director of the New York Taxi Workers Alliance, said at the July 11 rally. “We’re sick and tired of owner-drivers and their families to be the only ones bearing the brunt of this bubble bursting.”

If you think the taxi medallion crisis sounds similar to the subprime mortgage crisis, you’re right.

“There are many analogies between this crisis and the home mortgage crisis, including the fact that the people culpable have largely not paid a price, while the regular people are the ones whose lives have been ruined,” says New York City councilmember Mark Levine, who represents the 7th district, in Northern Manhattan, who joined the yellow taxicab drivers in calling for the city to take action on debt forgiveness for underwater taxicab drivers.

Levine initially started looking more into New York City’s taxi medallion loan crisis because of who gave out the lion’s share of these loans — a few credit unions that specialized in taxi medallion lending. In a previous life, he helped establish Neighborhood Trust Federal Credit Union, serving parts of Manhattan that overlap with what is now his council district.

“I felt that I had some expertise to offer, but eventually it became a moral cause as I learned more about the scale of this scandal and the city’s role in it,” Levine says.

One possible response to the subprime mortgage crisis could also apply to the taxi medallions — loan modification. The New York Taxi Workers Alliance would like to see underwater taxi medallion loans modified by reducing the original loan amount as well as the monthly payment amounts.

In its survey of drivers, the city found medallion owners are making monthly loan payments between $2,500 and $4,000. Aliyu currently pays $2,452 a month. Working with its members, the alliance determined that it would like to see monthly taxi medallion loan payments capped at $900.

There are two ways loan restructuring could happen. Levine says the city, along with other players like the New York Attorney General’s Office or the New York Department of Financial Services, could join forces to put pressure on the industry to restructure the loans themselves. The councilmember’s preference would be to restructure most of the underwater taxi medallion loans this way.

“The lenders are going to have to take a hit, but the truth is, it’s prudent of them to have more accurate accounting for the values of these loans and wise lenders I think are already starting to see that,” Levine says.

It’s more than just credit unions at this point who must be pressured. The National Credit Union Administration, the federal regulatory agency for credit unions, shut down two of the largest taxi medallion lenders last year after they suffered heavy losses due to the collapse of the medallion market, which means that the agency itself now has ownership of many underwater taxi medallion loans.

Nearly two-thirds of drivers surveyed by the city said their loans were issued by a credit union, including one of the credit unions taken over by the NCUA. Of surveyed drivers whose loans were now with the NCUA, only nine percent told city investigators that the agency had taken steps to lower monthly loan payments or reduce their loan principal.

The second option to restructure loans would be for the city, by itself or perhaps in partnership with an external agency, to buy the most distressed underwater taxi medallion loans and do the restructuring itself.

The office of Mayor Bill De Blasio has dismissed the idea of taking any action along those lines, telling the New York Times that a bailout that would cost upwards of $13 billion. Asked about it again last week, the Mayor said the city could not afford a bailout for yellow cab owner-drivers.

But Levine says that $13 billion figure is bogus. It’s not every one of the 3,423 estimated yellow taxicab owner-drivers who are underwater on their taxi medallion loans. Along with the NY Taxi Workers Alliance, Levine’s calling for the city to purchase only the most distressed medallion loans made to owner-drivers — not fleet owners (or anyone with a taxi-related criminal conviction). And he’d still prefer lenders themselves restructure most of the underwater loans.

The city estimates an average debt per owner-driver of $500,000 — not far from the alliance’s own estimate of $600,000. And the alliance isn’t asking for total loan forgiveness — it wants the owner-drivers to be paying $900 a month. At current interest rates of around four percent, for a thirty-year mortgage, that would come out to restructuring each taxi medallion loan to about $189,000 — which is roughly the current market value of a taxi medallion.

So let’s say there are 1,000 yellow taxicab owner-drivers with underwater mortgages that lenders aren’t willing to restructure, meaning the city would have to purchase those loans. Assuming the alliance’s $600,000 in debt per owner-driver, $411,000 in loan forgiveness per driver would amount to $411 million. Compare that to the $855 million the city earned by selling taxi medallions and collecting taxes on private sales, as reported by the New York Times.

There is more than just an analogy to the home mortgage crisis — there is precedent. In the aftermath of the home mortgage crisis, when Fannie Mae and the Department of Housing and Urban Development started auctioning off distressed and usually underwater mortgages to the highest bidder, New York City chipped in more than a million dollars alongside a range of partners to buy some of those mortgages.

Under that arrangement, the nonprofit Center for New York City Neighborhoods stepped up to serve as a coordinating body to conduct the transaction and restructure the loans, a multi-year process.

After hearing Center for NYC Neighborhoods Executive Director Christie Peale testify at a June 24 city council hearing in which she compared the taxi medallion loan crisis to predatory subprime mortgage lending, Levine believes the city could set up a similar arrangement for yellow cab owner-drivers.

“It won’t be a simple solution, but it’s achievable,” Peale tells Next City. “It’s critical that the city get the lenders to the table to establish a framework for loan modifications, and to work towards a debt reduction solution.”