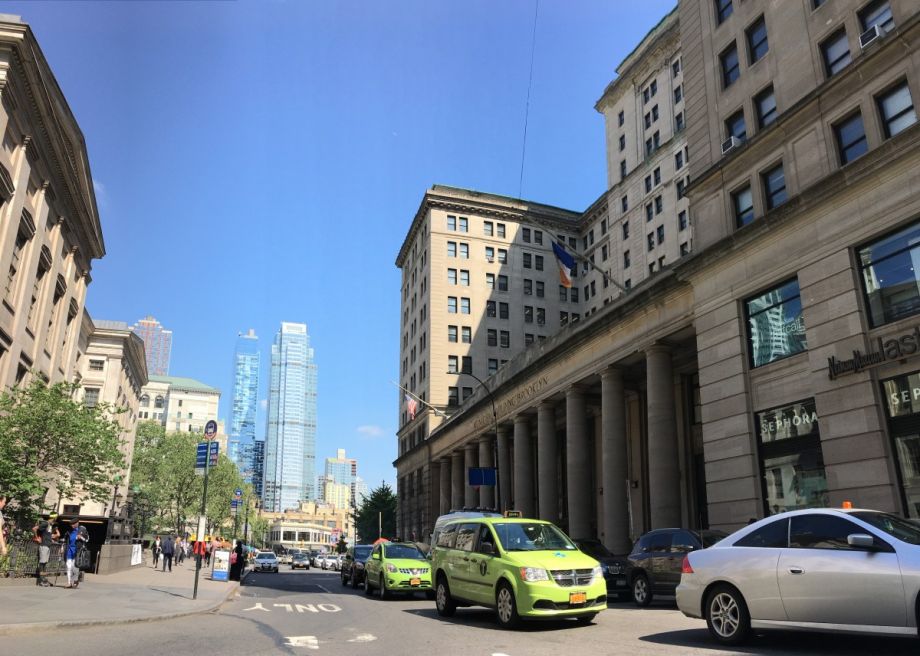 In a rather nondescript beige fifth-floor conference room inside the Brooklyn Municipal Building, with a mere 45 chairs set up for audience members, the NYC Banking Commission met Wednesday, as it does every two years to approve depository institutions for the city of New York.

But this week’s meeting was different: The commission officially made notice it had initiated the process of the city government cutting ties with Wells Fargo, as a result of the bank’s failing grade on its recent Community Reinvestment Act (CRA) examination.

The CRA is intended to hold banks accountable for meeting the needs of everyone in the communities where they do business. Examinations take place every three years for national banks, and there’s a four-tiered rating system: outstanding, satisfactory, needs to improve and substantial noncompliance. When announcing the “needs to improve” rating for Wells Fargo in March, examiners cited “the extent and egregious nature of the evidence of discriminatory and illegal credit practices,” and “extensive and pervasive pattern and practice of violations across multiple lines of business within the bank, resulting in significant harm to large numbers of consumers.”

The NYC Banking Commission Wednesday announced an immediate moratorium on all new city of New York contracts and deposits into Wells Fargo, a winding down of its existing accounts. It also noted that the Department of Finance has already begun the process of moving its depository services to other institutions.

It was somewhat a formality, as Mayor Bill de Blasio and Comptroller Scott Stringer preempted the meeting with an announcement of the decision earlier in the day.

“What happened at Wells Fargo was a fraud, and there must be consequences for wrongful behavior,” Stringer said in a statement. “The problem was not that the fraudulent accounts went undetected. The problem was that management and the board failed to recognize that the unethical behavior was systemic. It wasn’t a few bad apples — it was widespread fraud resulting from perverse incentives imposed by management.”

NYC joins Philadelphia, Seattle, San Francisco and Chicago among the major U.S. cities that have taken steps to explore or begin cutting ties with Wells Fargo, the nation’s third-largest bank. The state of California even announced it would no longer work with Wells Fargo on underwriting state-negotiated bond sales, a key business for the bank.

At the Brooklyn meeting, with Dakota Access Pipeline protesters slowly filling the room, the NYC Banking Commission was quite clear that, at least on paper, its decision to cut ties with Wells Fargo was related solely to Wells Fargo’s CRA rating and sending a signal about penalizing the unethical business practices associated with the failing grade. (Wells Fargo is one of the bank lenders to the pipeline project.) The commission’s authority to remove or deny a bank as a city depository based on its CRA rating comes from Title 22 of the Rules of the City of New York, which require that a bank have at least a “Satisfactory” rating from federal regulators in order to be designated as a depository institution for the city.

The NYC Banking Commission, officially consisting of the mayor, the comptroller and the city’s commissioner of finance, has no authority to cut ties with banks based on environmental risk or socially responsible investment concerns.

Extricating from Wells Fargo, which has been serving as the city’s primary depository institution, is a gargantuan task. According to the NYC Banking Commission, Wells Fargo has annually processed 6.7 million individual transactions for tax collection, in excess of $27 billion dollars in volume. Those transactions include 3.4 million annual real estate tax transactions totaling over $20 billion. Commission representatives also mentioned 1.8 million parking summons transactions generating approximately $119 million in city revenues. As of May 26, 2017, Wells Fargo had 99 bank accounts with $227.7 million in city deposits supporting critical city services administered by multiple city agencies.

“Wells Fargo is heavily embedded in the architecture of the finances of the city of New York,” said Karen Cassidy, assistant commissioner for the Department of Finance, reading a statement at the Wednesday meeting on behalf of the commission. “There are only a limited number of banks capable of handling the volume of transactions and dollar amounts that flow through NYC central treasury. It would be extremely disruptive to the revenue collection function and the cash flow of the city of New York if the DOF were suddenly unable to use the depository services of Wells Fargo.”

For that reason, the NYC Banking Commission actually had to exercise its discretion to invoke a “necessity exception” under Title 22, allowing it to conditionally designate Wells Fargo as a city depository for the time being despite not meeting the CRA rating requirement. Wells Fargo’s conditional designation as a city depository, however, includes an immediate moratorium on all new deposits and contracts for depository services for the city. Existing contracts with Wells Fargo for payment processing, check printing and other banking services will also not be renewed under the conditional designation, the commission said.

No timeline was given for when the city would officially cut ties with Wells Fargo, although the commission emphasized that it must seek options that would not increase ongoing costs for the city whenever possible. Also, if at any time Wells Fargo receives a federal CRA rating of at least “Satisfactory,” the Banking Commission affirmed that it has the authority to reconsider the bank’s application for full designation.

Wells Fargo expressed confidence that it would receive a new CRA rating of at least “Satisfactory” later this year, after requesting an expedited CRA examination from federal regulators.

Also on the docket Wednesday: Santander Bank, a relatively new arrival to NYC, was completely denied its application to become a city depository due to its own failed CRA exam. The banking commission even voted on a resolution to remove $5 million deposited from the city into a Santander Bank branch to support its expansion into a distressed Brooklyn neighborhood. (The $5 million deposit was made by the city as part of the state’s Banking Development Districts program.)

Twenty other banks, including union-owned Amalgamated Bank, Puerto Rico-based Popular Community Bank, Bank of America, Citi, JPMorgan Chase and HSBC were all given full designations as depository institutions for the city of New York for the next two years, effective immediately.

Citing the state’s open meeting law, the commission declined to give audience members an opportunity to testify or address the meeting on the record as part of the proceedings.