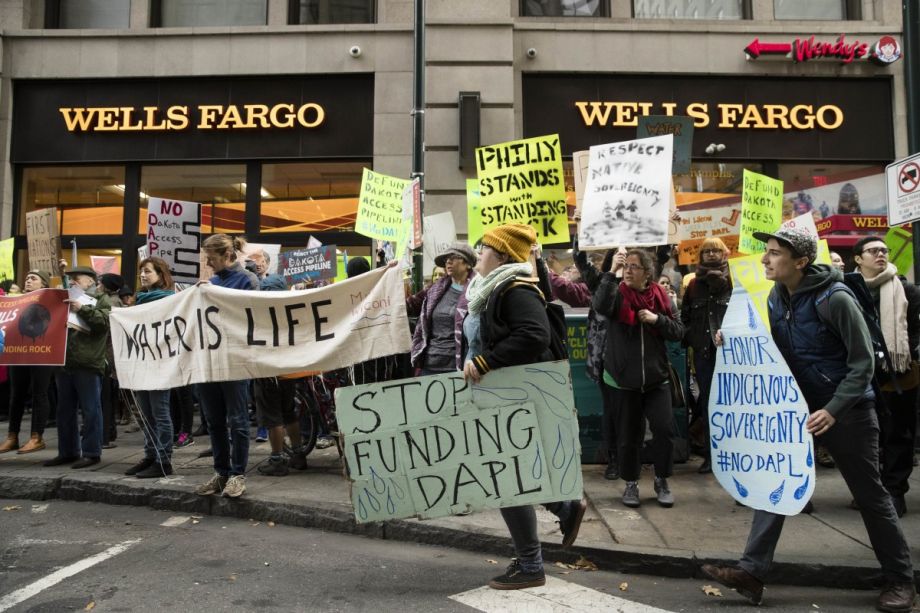 Philadelphia City Council Member Cindy Bass was already thinking about how to cut the city’s ties with Wells Fargo when bank CEO John Stumpf testified last September before the U.S. Senate. Questioning Stumpf about the bank’s fraudulent accounts scandal, Senator Elizabeth Warren said, “So you haven’t resigned, you haven’t returned a single nickel of your personal earnings, you haven’t fired a single senior executive. Instead, your definition of accountable is to push the blame to your low-level employees who don’t have the money for a fancy PR firm to defend themselves.”

Search the U.S. Department of Justice website for “Wells Fargo” and “settlement” and you’ll get a litany of results: a $25 billion settlement for foreclosure abuse (a record), $1.2 billion for improper mortgage lending practices, and $184.3 million in compensation for steering black and Latino borrowers into predatory subprime mortgages. The 2016 hearing was the moment when the wheels fell off the stagecoach.

Stumpf finally stepped down, about a month later, but he never returned a nickel of his pay. In fact, he left with a $133.1 million severance package.

“Their lackluster responses, it was so outrageous, they just didn’t get it,” says Bass. “As a city, how could we be in bed with this company? As the City of Brotherly Love, we stand for more, we should have an expectation for more.”

On September 29, 2016, Bass co-introduced, and city council unanimously passed, a resolution directing the council’s finance committee to hold hearings on the impact of the Wells Fargo scandal and the feasibility of removing the bank as a city depository.

Earlier this month, Philadelphia took another step toward that goal, authorizing a new bank for the city’s payroll services effective July 1. The city’s $1.6 billion payroll includes roughly 29,800 full-time, part-time and seasonal employees, around 3,700 of whom choose to receive their pay by check. Those checks and pay stubs will no longer say Wells Fargo.

Despite the momentousness of the occasion — CNBC characterized it as serving Wells Fargo its “walking papers” — it was a surprisingly quiet vote, with little fanfare or any more than the usual audience, according to Bass. “We did not get our advocacy community rallied up for this particular vote,” she says. They’re saving that moment for when the city pulls all of its deposits out of Wells Fargo.

“This work will continue,” adds Bass.

Part of that work includes exploring the possibility of setting up a public bank for the city of Philadelphia, which could take over payroll functions and city deposits permanently, among other functions. At-large Council Member Derek Green initiated that exploration by passing a resolution in January 2016 authorizing the council’s Committee on Commerce and Economic Development to hold hearings regarding public banking. The first hearing took place in February 2016.

The universe seems to have conspired to put the right person at the right time in the right elected office. Green spent several years in banking in Philadelphia and then, while working for former City Council Member Marian Tasco, drafted one of the first municipal anti-predatory lending laws in the U.S. With deep experience in both banking and government, Green was mulling over a public bank even before he was sworn in last January alongside new Mayor Jim Kenney. The public banking resolution was his first solo act as a legislator.

“When they took direct lending out of branches,” Green said last year to open up the first public banking hearing, “that’s one of the reasons why I left banking, because at that point, I no longer could be the banker that I wanted to be … .”

Green hopes that a public bank can restore banking to be the community-driven, character-based lending that he was able to do successfully in his early days, particularly when it comes to small business lending. Most banks these days don’t have branch-based loan officers, as Green pointed out. That makes it pretty much impossible to maintain the relationships that are especially essential for small business lending.

A public bank can change the local or regional economics of banking. The Bank of North Dakota is the last remaining public bank in the country. The state legislature established it in 1919. It opened its doors on July 28 of that year, with $2 million in capital ($28 million in today’s dollars accounting for inflation). With $7.2 billion in assets today, it functions largely as a “banker’s bank,” mostly making low-interest loans alongside or directly to community banks and credit unions around the state. With such a reliable, affordable and local source of capital, North Dakota community banking is stronger than in other parts of the country. It’s a big reason why North Dakota has more banks and credit unions per capita than any other state.

In the wake of the financial crisis and continued fallout from foreclosure abuse and fraud like happened at Wells Fargo, other states and cities have been more seriously considering adapting North Dakota’s public bank model. Legislators and agencies in Oakland, Berkeley, Richmond, San Francisco and other municipalities around the Bay Area are moving forward and at various stages with considering public banks. Back in 2011, California joined 11 other states whose legislators had introduced bills exploring the possibility of new public banks, Yes Magazine reported.

Opponents of public banks argue that it can be risky for the government to be making loans, given there’s no guarantee it will have the most competent banking staff in place. Some say the debacles of Fannie Mae and Freddie Mac, quasi-public institutions that operate somewhat like highly specialized banks, are a warning. Politicians may also take advantage of a public bank to make loans based on political favors rather than economics.

So far, the leader in the race for new public banks appears to be Santa Fe, New Mexico, where legislators unanimously voted on April 27 to launch a task force to formally consider setting up a public bank. The task force’s work will build on a feasibility study the city completed in 2016.

Back in Philly, Green has been working with Public Banking Pennsylvania, a statewide advocacy group, to marshal resources for a public banking feasibility study for the city. They’ve been reaching out to local universities to see if graduate business and policy students might be able to chip in. At the hearing last year, Emma Chappell, founder of United Bank, Philadelphia’s only black-owned bank, also offered to share further advice on her experience with state banking regulators.

Green also requested and received information from the Office of the City Treasurer and the Department of Finance regarding all the city’s deposit accounts. Per its latest comprehensive annual financial report, the city has $621.3 million in deposits, but also another $1.8 billion in various investments. According to Green, there are also various “rainy day funds” that departments keep, including the water, fire and police departments. He also requested more details on the various local and state laws that may determine what accounts might be possible to move into a new, public bank.

With all that information, Green continues courting partners for a feasibility study. He hopes to convene more hearings on a public bank after this year’s city budget negotiations conclude at the end of June.