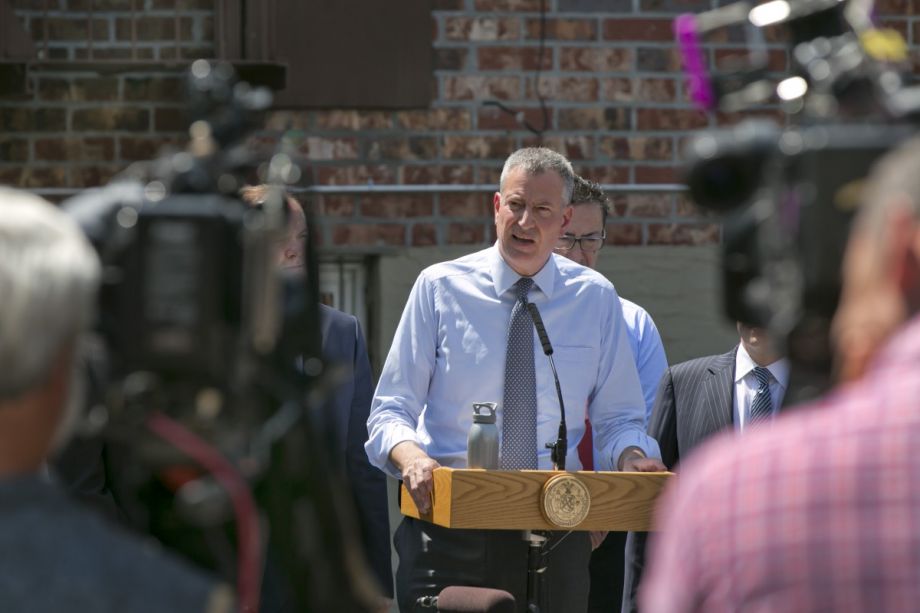 Every New York mayor since the 1970s (David Dinkins’ brief tenure excepted) has left an instantly recognizable imprint on the city. Ed Koch theatrically piloted New York through a fiscal abyss and, in the words of one obituary, “restored the spirit of the city after years of urban decay.” Rudy Giuliani utterly transformed New York’s approach to policing and scrubbed the city clean, leaving a candy-coated Times Square behind to encapsulate his legacy. Michael Bloomberg altered Times Square further, closing it to traffic and strafing it with cafe tables and bike lanes, a symbol of his radical upzoning and upscaling of a once-gritty city.

Each of these mayors fully inhabited the moment they presided over. Whatever you thought of them, there was no mistaking what they were all about. Yet, four years after he was elected, there’s still no consensus on what Bill de Blasio is — ironic for a man some worried would turn the city of Wall Street into a Marxist collective. New York’s leftiest mayor in memory blew into office as a 6-foot-5 rebuke to his technocrat predecessor, promising nothing less than a progressive revolution: affordable housing, free pre-K, fairer policing, mandatory paid sick leave — a reverse-engineering of the urban yacht club that blossomed under Bloomberg.

Despite the fulfillment of some of these promises — and the partial fulfillment of others — after a win in Tuesday’s election, de Blasio will enter his second term uncelebrated, underwhelming and somehow undefined. The National Review (never his biggest fan) labeled him “America’s Most Irrelevant Mayor,” and The New York Times’ backing of his reelection wasn’t exactly a white-hot endorsement. “New York remains, on the whole, well run,” the editorial board blandly noted, while a separate article in the news section described his identity as mayor as “still very much to be determined.”

Why hasn’t Bill de Blasio gelled in the city’s collective psyche? One charitable reason is that he’s chosen to focus on a constituency many simply ignore. His promised 200,000 units of affordable housing will never be seen by the vast majority of 8.5 million New Yorkers. Nor will the lives saved by Vision Zero’s 12 percent drop in traffic deaths. Nor the thousands of inmates extricated from soon-to-be-closed Rikers Island. His attention is on the most vulnerable, the thinking goes, so the “haves” don’t feel the estimated $21 billion impact of his policies.

But another theory that’s gaining traction takes the opposite view: That de Blasio is not the devoted, storm-the-gates progressive he claims to be — he’s somewhere in the mushy middle. In certain ways, notes City Limits, “he has leaned toward being a far more conventional politician than his ‘Tale of Two Cities’ 2013 campaign suggested he would be, or as the times demand.” His affordable housing plan has been attacked as a backdoor giveaway to private developers — a perception fed by the fact that New York’s top real estate lobby endorses the plan. His implementation of Vision Zero has been “way too timid,” according to transportation advocates. Proponents of policing reform say he’s failing to thoroughly hold the cops accountable, and his reluctance to completely disavow “broken windows” crime-reduction strategies has upset Black Lives Matter activists. Even his Rikers closure plan has some social justice warriors up in arms.

To deal with this, de Blasio appears to be doubling down on his first-term priorities. Last month, he upped his affordable housing goal to 300,000 units by 2026. Almost immediately, the plan was criticized. “100k more apartments that are unaffordable for communities! ‘Affordable housing’ has really become a meaningless term,” tweeted a prominent housing advocate with the hashtag #GentrificationPlan.

Every New York mayor deals with complaints — complaining is what New Yorkers do. But de Blasio’s dilemma going into his second term is that the people complaining most loudly are often part of his core constituency, and many outside that constituency feel disconnected from him and his policies. “People want him to reflect the tone of the city,” one observer told Vanity Fair, “but his agenda is one agenda and nothing else: income inequality and affordable housing.”

Refocusing his second term might require the mayor to reach beyond these core causes and drill down on brass-tacks issues — the traditional concerns of City Hall. Take traffic, for instance, which has reached crisis levels in New York. The city’s surge in new car registrations has only been exacerbated by on-demand ride services and trucks delivering Amazon goodies. This isn’t just a problem for drivers: New York’s buses today are 10 percent slower than they were in the 1990s.

It’s an issue that affects every New Yorker, and the most battle-tested solution for it is well established: congestion pricing, a solution New York Governor Andrew Cuomo is on board with. It’s the kind of policy New Yorkers will hate for a while, and then likely love once they see its effects, like the smoking ban or a pedestrianized Times Square. But de Blasio is dead set against it. “I’ve never seen an example of it that I thought was fair,” he told the media in August. Instead, he’s introduced an initiative called “clear lanes” to discourage infractions like double parking. It’s not quite congestion pricing and it’s not quite nothing — it’s something in the mushy middle. Transportation advocates estimate it will generate just 3 percent of the monetary benefits true congestion pricing would create.

Perhaps half-step solutions like these are why, when de Blasio asks, “How’m I doin’?” the response from many residents is “Meh.” (His approval rating barely scrapes 50 percent.)

“In reality, it is not the affluent who are apt to be disappointed by a de Blasio administration, but those who voted for him with the expectation that the mayor could meaningfully change their lives,” predicted one writer back in 2013. There’s still time for de Blasio to make residents feel that he’s changed their lives, but to do that, he might need to risk ticking off the entire city, not just his core supporters.