New Haven Development Could Speed Up Highway Removal – Next City 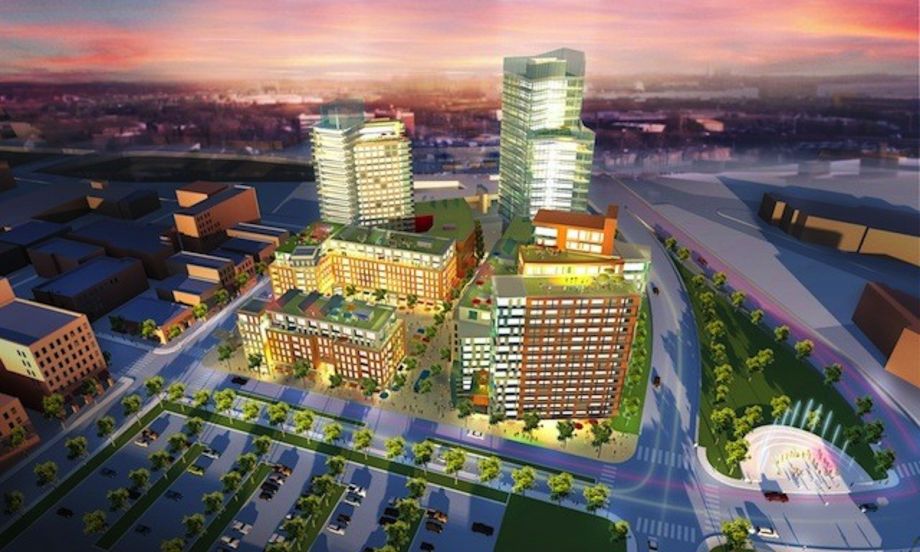 Back in 2007, the city of New Haven, Conn. won federal High Priority Project Transportation funds to transform a highway back into streets fit for pedestrians as well as cars. Now, a proposed $360 million development on the grounds of the former Veterans Memorial Coliseum could speed up the process of removing the highway, known as Route 34.

A vote of confidence has given the go-ahead to developers on a two-phase project that will turn the former Coliseum — which is now a parking lot — into a mixed-use project with 1,000 apartment units, 76,000 square feet of retail space and 200,000 square feet of office space.

It’s no secret that the disastrous highway boom of the 1950s literally sliced through cities and cut neighborhoods off from each other. New Haven isn’t the first city to try and reverse this negligence: New York, San Francisco, Portland and Milwaukee are among those that have enjoyed success with urban highway removal, and the concept is on the table in places from Syracuse, N.Y. to Dallas to the suburbs of Salt Lake City.

Plus, there are additional benefits other than making streets safer and neighborhoods more easily navigable. Namely, boosting economic development.

When Providence, R.I. rebuilt I-195 — a classic example of 1950s-era highway cutting up a downtown — city planners rerouted it around the downtown, rather than through it. Which, as Yonah Freemark detailed in a 2012 Forefront story, opened “a huge plot of developable land downtown.”

By rerouting the unsightly and unsafe highway, Providence promised a resurgence in development. From Freemark’s story:

The redevelopment of the I-195 corridor promises to bring new development to both sides of the river, knitting Olga’s neighborhood together with Askari’s. Nine acres of public parks, a pedestrian bridge over the river and a new grid of streets, designed to replicate what had been there a half-century ago, will turn the two distinct areas into a bigger, denser downtown. In the midst of the new infrastructure, 20 acres of vacant land will be sold to developers, who are expected to add 2-3 million square feet of commercial and residential space. In the end, planners expect a series of four- to five-story buildings, similar in density to the built-up sections of downtown Providence, though without high-rises.

That was perhaps a rosy outlook from two years ago. Work began on the land in 2013, and just last month Gov. Lincoln D. Chafee’s state budget included a proposal for two new bus hubs in downtown Providence. (He also, to the audible groans of many alternative transport geeks, proposed a new parking garage.)

Providence, with its forward-thinking planning that reversed bad post-WWII decisions, should be a model for its fellow New England city. As it stands, the proposed development in New Haven could act as a catalyst not just for development, but for speeding up the timeline on the Route 34 project. It’s simply a matter of finding the money to put Route 34 out of its misery.