End of the Roads: When Highway Removal Works – Next City

End of the Roads: When Highway Removal Works 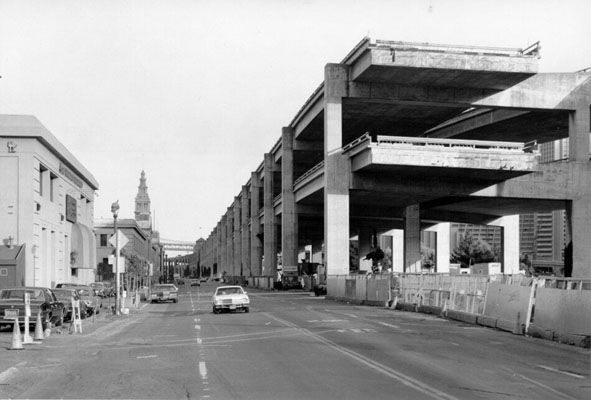 There’s something daunting about making changes, in any way, to a piece of infrastructure that serves anywhere from 20,000 to over 100,000 vehicles a day. Critics have a right to express understandable concerns about gridlock and economics when planners announce that they want to remove or convert a major thoroughfare in their city.

It’s vital, then, for advocates to hold up examples of where highway removal has worked. The numbers exist to back up claims that the practice can restore a city’s social fabric and facilitate local development, all without severely impacting traffic or commerce. We just need to make sure our neighbors know that.

Today, the Institute for Transportation and Development Policy released a report that may serve as an important resource for future discussions about the issue. Coinciding with Next American City’s Reimagining Urban Highways conference in Philadelphia—in which experts will posit alternatives for the future of I-95—the report looks at case studies from five cities around the world that have successfully turned highways into thriving boulevards or parks. From Milwaukee to Seoul, highway removal has served as a painless way to generate billions of dollars in investment for once-blighted areas.

For example: Since 1959, San Franciscans had to deal with the elevated Embarcadero Freeway cutting then off from the city’s eastern waterfront (and ruining their view of the Ferry Building). Nonetheless, voters kept rejecting plans to tear it down—until 1989, when an earthquake damaged it beyond repair and forced the city to consider alternatives.

Now instead of an elevated highway, the Embarcadero is a six-lane boulevard flanked by pedestrian walkways 25 feet wide. There are street lights, palm trees and waterfront plazas. Thousands of residential units have gone up, increasing the housing stock by over 50 percent, and jobs in the area have grown by nearly a quarter. The Ferry Building now contains a farmer’s market and retail shops. Neighborhoods in the immediate vicinity have seen a revival, whether they the freeway used to isolate them directly (Rincon Hill) or simply held back the entire area from flourishing (South Beach).

One city not included in the ITDP report is Dallas, where an ambitious capping project has been underway for the past three years and may be completed this fall. The Woodall Rodgers Freeway, a recessed eight-lane artery connecting two interstates, slices right through downtown Dallas, separating its burgeoning arts district from a residential neighborhood. For years, pedestrians looking to cross had to do so over a handful of noisy, ugly and foul-smelling bridges.

But recently, the city partnered with the Texas Department of Transportation and private developers to cap a three-block portion of the freeway with a 5.2-acre green space. If built as planned, it will come replete with a restaurant, dog parks and 400 newly planted trees, among other things.

“We had a lot of trouble initially explaining the concept,” said Linda Owen, president of the Woodall Rodgers Park Foundation. Locals didn’t know how the capping would work, and had visions of impenetrable steps and inclines.

But once it was understood that the deck would remain level with the street grid and easily accessible, enthusiasm grew. Furthermore, investment in the area took an upswing almost immediately upon the project’s announcement, with construction on a large condo building breaking ground in October 2009, the same month the city began building the deck. Today, according to Owen, the $110-million project enjoys universal support from the city council.

Now about 80 percent complete, the park will perhaps serve as a precedent for similar sites throughout Dallas. City leaders, said Owen, have been talking about enhancing neighborhood connectivity, especially in South Dallas. If the impending park over the Woodall Rodgers succeeds, it will show that even a Sun Belt city crisscrossed with highways can reclaim space for a shared common purpose.