As Texas Goes for New Funding Sources for Highways, Some Advocates Want One Torn Down – Next City

As Texas Goes for New Funding Sources for Highways, Some Advocates Want One Torn Down 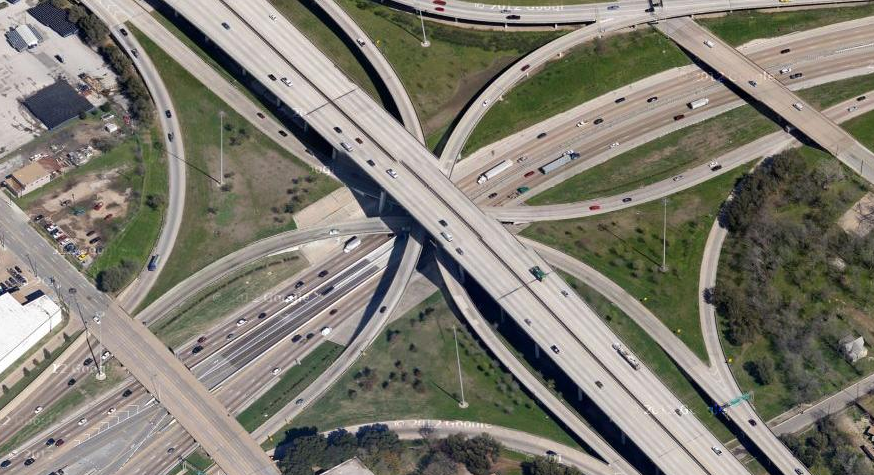 As the Texas Legislature’s 2013 session came to a close on Sunday, the Dallas Morning News published a rundown of what state lawmakers achieved this year in terms of transportation.

Among the efforts that made it is a bill allowing officials to seek public-private partnerships for various highway construction projects throughout the state. Another bill gives authorities more leeway to crack down on toll runners.

One bill that didn’t pass would have sped up development of a 62-mile commuter rail corridor called the Cotton Belt Rail Line, which is planned to run from Plano to Fort Worth.

In fact the only direct statewide victory for public transit this year, apparently, is that Texas transit agencies can now bring in new members from neighboring counties, which could facilitate a more regional and holistic approach to transportation planning.

Per the Morning News, local transpo leaders are mostly pleased with the Legislature this year. But that state lawmakers would authorize new ways to collect highway funding, and let a major commuter rail project stall, indicates that still-sprawling Texas cities like Dallas have a ways to go before they have the resources to become more urban and less car-focused.

Meanwhile, the Legislature’s adjournment this weekend coincided with the launch of a slick website dedicated to tearing down a Dallas highway.

A New Dallas, run by urban planner Patrick Kennedy and real estate developer J. Brandon Hancock, posits that the city would benefit from losing a 1.8-mile elevated spur of highway that cuts downtown off from the Deep Ellum neighborhood to the east.

Interstate 345 connects interstates 30 and 45 to the south with the Woodall Rodgers Freeway and Route 75 to the north, closing the amoebic ribbon of asphalt that borders downtown Dallas on all sides. Built in the early ’70s, the road is nearing obsolescence and the Texas Department of Transportation has a set of nine options on the table for addressing its structural issues.

These range from rehabbing the elevated road to completely rebuilding it. A New Dallas’ objective is to get highway removal, and a reconstruction of the historic gird that the road replaced 40 years ago, added to TxDOT’s list of alternatives.

“We can replace it with people living here that would be able to walk downtown to jobs, walk to parks,” Kennedy, who lives in downtown Dallas, told a local television news station in November. “We should demolish it and restitch the grid, the historic urban grid between Deep Ellum and downtown.”

About 160,000 drivers use the highway daily. Members of a local community association have told reporters that in order to make crossing beneath the 10-lane road less treacherous for pedestrians, their organization has built parks and painted murals beneath its decking.

But the 245 acres now smothered by the highway could, Kennedy and Hancock write, serve as the home to new streets with housing, parks and businesses should the highway come out. (It bears mentioning that Hancock founded the real estate and consulting firm GreenShoots Real Estate, which specializes in infill.)

I-345 is one of the Interstate Highway System’s “unsigned” roads, meaning that its proper name appears only on paper. Drivers on the road won’t see any signs reading “I-345,” and the road is usually mapped as part of Route 75, or the North Central Expressway.

The idea to tear down I-345 may be the first time Dallas has encountered a proposal for full-fledged highway removal, but it does have experience with highway burial. Last year the city capped a three-block portion of the Woodall Rodgers Freeway, which connects to the North Central, with a 5.2-acre greenspace.

Kennedy, who runs the blog Walkable DFW, has a 103-slide presentation on his removal idea available online.