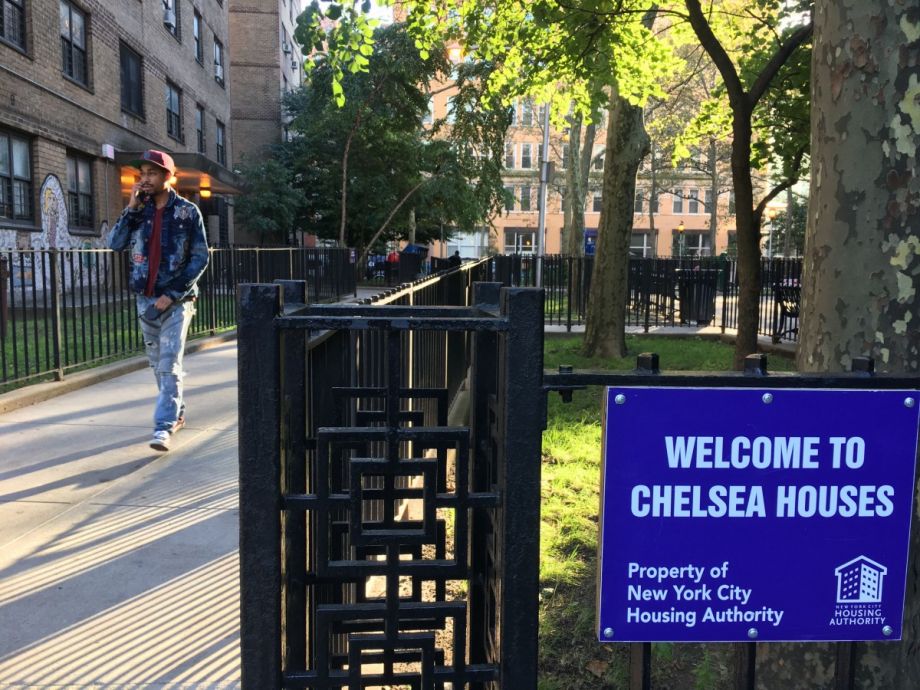 The New York City Housing Authority houses more than 400,000 people, but its properties are in urgent need of repair; one estimate puts the cost at $45.2 billion over the next 20 years. (Photo by Jared Brey)

Last week, Representative Alexandria Ocasio-Cortez (D-NY) and Senator Bernie Sanders (I-VT) stood outside the U.S. Senate building in Washington with a small army of housing-rights advocates and public housing residents to announce an ambitious plan to remake public housing in the United States.

Under the plan, called the Green New Deal for Public Housing Act, the federal government would spend $180 billion over ten years to retrofit and update every public housing unit in the country, with the goal of eliminating carbon emissions in federally owned housing and providing job training and work opportunities to public housing residents. The investment would not only resolve public housing authorities’ roughly $35 billion need for critical repairs. It would also require paying prevailing wages and honoring project labor agreements on every project funded by a grant, with priority hiring given to public housing residents, veterans and formerly incarcerated returning citizens. And it would improve public housing communities with newly built childcare and senior centers, community gardens and commercial spaces, high-speed internet hookups, energy-efficient windows and walls, state-of-the-art appliances, and enough bikes for every resident to ride.

In short, the legislation is meant to reverse the long disinvestment and decline of public housing in America, improve the living conditions of 1.2 million households, and provide a model for a broader Green New Deal aimed at adapting to and mitigating climate change while providing jobs and correcting economic and racial injustices.

“This legislation … adopts the tenets of the Green New Deal, which is, first, to center front-line communities — those who are impacted most by the climate crisis, communities that are low-income, communities of color, native communities, rural communities,” Ocasio-Cortez said at the rally. “We’re going to center them, and that’s why we’ve decided to go with public housing first.”

The bill was co-sponsored by Senators Jeff Merkley (D-OR) and Elizabeth Warren (D-MA). If adopted, the Act would mark a dramatic reversal of the federal government’s approach to public housing. Construction of public housing first started during the original New Deal in the 1930s; since that time, the government’s interest in building and maintaining its housing has often waned. The reputations of public housing communities were maligned by officials averse to all types of public assistance, justifying further cycles of disinvestment and deterioration in the mid-20th century and beyond. And disinvestment has made conditions worse. For example, homes owned by the New York City Housing Authority are borderline unlivable, according to the Regional Plan Association, and in need of $45.2 billion for repairs over the next 20 years. NYCHA houses more than 400,000 people.

“The narrative is that public housing is a failed program — people across the political spectrum see that I think,” says Alex Schwartz, a professor of urban policy at The New School and author of the textbook Housing Policy in the United States. “It’s very difficult to turn that narrative around, even though there are several successful public housing developments around the country.”

NYCHA “for many, many, many years was considered an exception” to the narrative of failure, Schwartz says, but the reduction of federal support took a toll on the system. In the absence of direct federal investment, cities and states have had to use complex financing programs and tax credits to try to provide housing subsidy for people who need it. A reinvestment in public housing such as the one called for by the Green New Deal Act would eliminate the need for many of those programs, Schwartz says.

Since the late 1990s, public housing authorities have been prevented from building any projects that increase the total number of housing units in their system under a federal provision called the Faircloth Amendment. The Green New Deal for Public Housing Act would eliminate that amendment, and theoretically pave the way for an overall increase of public housing in the U.S. Adrianne Todman, CEO of the National Association of Housing and Redevelopment Officials, says that people who work in housing authorities have mostly not talked about the Faircloth Amendment for years, because the overall lack of resources for public housing is a bigger barrier to growth than a legal cap on the number of units. Housing authorities have been stuck in a “chicken or egg” situation in which people don’t want to invest in what they see as bad-quality housing, but the housing can’t be improved because of a lack of investment, Todman says. Even still, she says, public housing is the best-quality housing for low-income people in many areas. The investments included in the Green New Deal Act are a welcome proposal, she says.

“There’s a lot of creativity built into this bill in terms of how to go at green public housing,” Todman says. “I think there is so much creativity that we need to digest a little bit about what the impact on our members would be.”

Sanders and Ocasio-Cortez were joined at the announcement by NYCHA residents, tenant advocates, and representatives of large groups such as the National Low Income Housing Coalition, the Center for Popular Democracy, the National Housing Law Project and the progressive think tank Data for Progress. Daniel Aldana Cohen, a senior fellow at Data for Progress and director of the Socio-Spatial Climate Collaborative at the University of Pennsylvania, helped produce a report looking at the potential impact and popularity of the legislation. Cohen has also worked with Ocasio-Cortez’s office on the legislation, and Data for Progress was able to review the bill with enough lead time to conduct polling on its recommendations. The housing investments in the Act would actually produce more jobs in states controlled by Republicans than ones run by Democrats, the Data for Progress analysis shows. Republicans were mostly opposed to policies such as the ones contained in the Act, according to the group’s polling, but overall, a majority of people polled supported the proposals, including majorities of Democrats and independents. Republicans were also likelier to support the investments if they included job apprenticeship and training programs for residents, according to the group’s polling.

“I think the American public is a lot more open-minded about the future of public housing than they get credit for,” Cohen says.

The framing of the issue is key, Cohen says. The energy-efficiency investments in the act would in many ways simply modernize public housing, bringing it into step with common practices in private-market development, he says. And especially given the historical shortcomings of the government’s approach to public housing — exacerbating racial segregation and locking in place the notion that public housing was a “last resort” option — it’s important for the Green New Deal to demonstrate how fighting inequality, eliminating carbon emissions, and producing jobs are all part of the same project, he says.

Ocasio-Cortez and Sanders deserve credit for the “political courage” they showed in advancing the Act, Cohen says, but much of the credit goes to a growing movement of tenants and housing advocates making demands for new protections and investments as affordable-housing shortages affect the whole country. In just the last few months, two nationwide campaigns have brought federal attention to demands for a “Homes Guarantee” involving 12 million new social housing units, and new federal tenant protections and rent-control policies.

Those movements have forced presidential candidates to produce unprecedentedly nuanced housing plans, says Tara Raghuveer, an organizer with the groups KC Tenants and People’s Action, which is behind the Homes Guarantee campaign. The Green New Deal for Public Housing Act even incorporates a common rallying cry among tenant activists, declaring that is the policy of the United States “to guarantee the right to housing for every individual.” Whether or not the legislation goes anywhere in Congress, the progressive ambition at the national level creates room for cities and states and down-ballot candidates to make bigger demands, Raghuveer says.

“I think we can and should think of right now as a period of deconstructing dominant narratives and myths about housing and how it’s provided and for whom, and in place inserting our imagination for what a better world looks like,” she says.