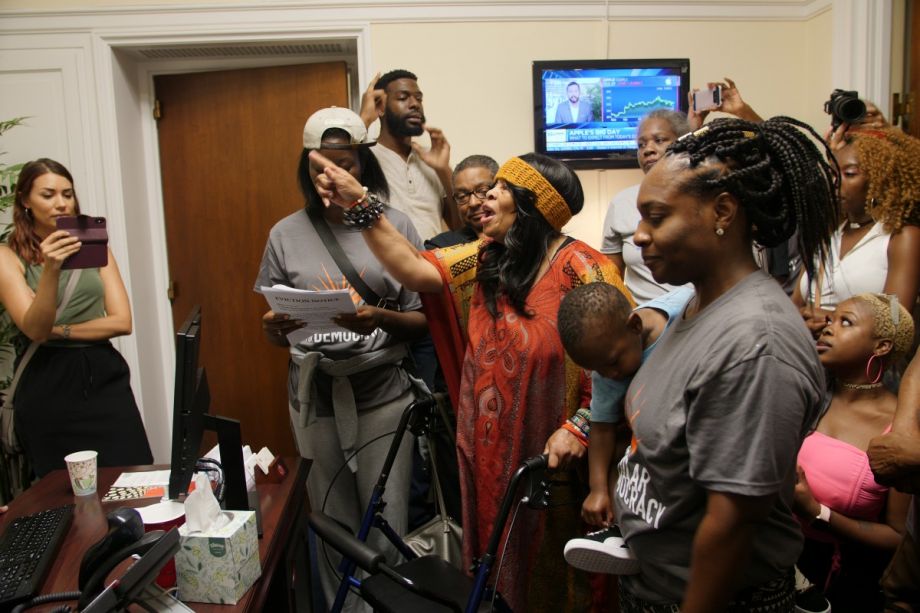 The Center for Popular Democracy and a network of grassroots activists from around the country spent most of last week in Washington, D.C., welcoming Congress back to the capitol with a series of protests, campaign launches, and direct actions. On Tuesday, the Brooklyn-based nonprofit, which has affiliate groups in 34 states plus Washington and Puerto Rico, launched a new housing campaign called “A Home to Thrive.” They marked the occasion by handing “eviction notices” to representatives who are known for taking lots of money from the real estate industry while their constituents suffer from unstable housing conditions.

“It was really a call to action to Congress to protect their constituents, to protect families and neighborhoods, and to give people the ability to stay in their homes and fight displacement,” says Dianne Enriquez, the co-director of community dignity campaigns for CPD.

Alongside the protests, the group also released a policy platform meant to secure federal support for advocacy efforts that are already underway in various cities. The campaign is aimed at protecting tenants, improving the quality of the housing stock, “reining in corporate landlords,” empowering public housing residents, and promoting fair housing. Specifically, in terms of tenant protections, the campaign calls for Congress to support a range of demands that tenant organizers have been making at the local level. They include a national cap on rent increases, protection against evictions without just cause, bans on source-of-income discrimination, and a fund to provide access to counsel for people facing evictions.

The platform also asks for the federal government to invest in community land trusts, intervene in cases of exclusionary local zoning, and repeal policies that restrict housing access for undocumented immigrants. It calls for participatory budgeting for public-housing residents and nationwide lead abatement. And it calls for requirements for large landlords with properties in multiple states to disclose their standard lease agreements, median rents, code violations, and tenant turnover, along with other rules meant to reduce the power of large multifamily property owners.

In some ways, the campaign overlaps with the broad goals of the Homes Guarantee plan that was released by People’s Action, another network of tenant organizers, earlier this month. People’s Action and the Center for Popular Democracy have “similar genetic makeup,” Enriquez says. But the “Home to Thrive” campaign is meant to support the housing goals that are already the target of local campaigns by CPD’s affiliate groups, she says.

“We’re not trying to get in front of the movement. We’re really trying to help set the stage and pave the road for where the movement is going,” Enriquez says.

Also like People’s Action, the organizers pushing the campaign are fighting gentrification and displacement in their own cities and their own lives. Donna Price, one of the organizers who traveled to D.C. for the protest last week, says she got involved with Detroit Action when they met with a group of people at a homeless shelter where she was living. She’s still trying to find stable housing, she says.

“It’s hard because the rent is so high here, and to find subsidized housing where the rent goes by your income, they’re all full basically. So it’s a real problem,” Price says.

Price flew to D.C. with six other members of Detroit Action. The Center for Popular Democracy also has partnerships with other prominent advocacy groups, like Make the Road New York and New York Communities for Change, Manufactured Housing Action, Organize Florida, and the Alliance of Californians for Community Empowerment.

“We’re trying to get the senators and everybody to understand that they’re letting these billionaires come into our town, buy up the property and build new property, and it changes the standard of living and the rent because they’re high-end apartments, and that just pushes the lower class out and the homeless out,” Price says. “We have a human right to live comfortably like anybody else, so that’s why I fight the way I do.”

As Ely Frankly, a volunteer with Arkansas Community Organizations in Little Rock, says, “We want to press this [in D.C.] because it’s really more of a federal issue to make sure that every American citizen has access to habitable living.”

Both the “Homes Guarantee” campaign and the “Home to Thrive” campaign are working with the most progressive members of Congress on potential legislation to implement some of their demands. The Center for Popular Democracy sent out a press release after launching its campaign last week with supportive quotes from members of “The Squad,” including Reps. Alexandria Ocasio-Cortez, Rashia Tlaib and Ayanna Pressley. Enriquez says it’s too early to say what kind of legislation those members might introduce, though. The Center for Popular Democracy has also tried to push all the presidential candidates to include strong affordable-housing plans in their policy platforms.

“We have had really promising conversations, particularly with the members of the squad,” says Enriquez. “They’re very ready to take bold action and recognize that housing is an important issue and a core element of a stable and just society. There’s a lot of momentum … They’re very willing and coordinated to become champions for communities and grassroots movements. I think we have some promising work ahead of us.”