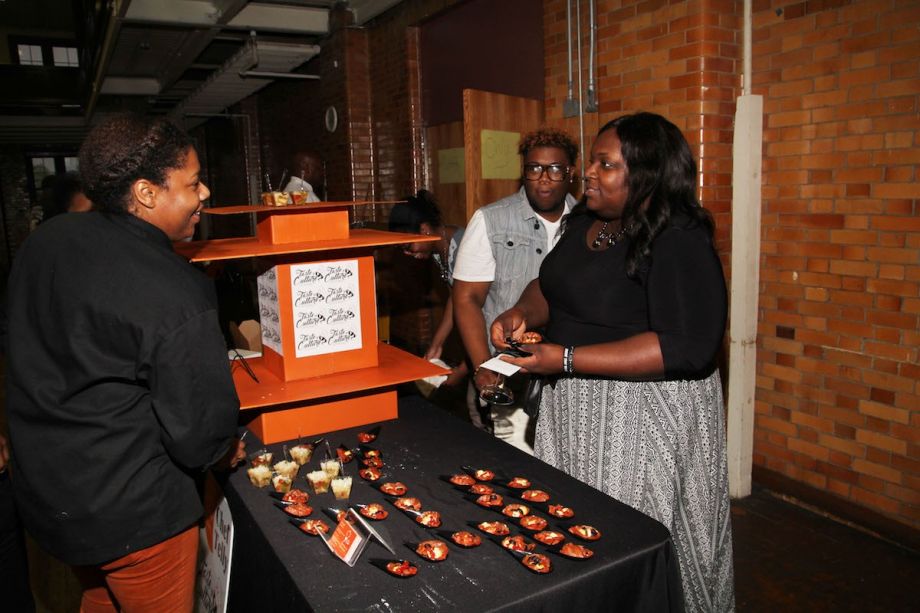 Therman Sisco never really thought of his catering services as a business. After all, that would make the cooking he does “work” — and being at a stove is so much more to the 53-year-old lifelong resident of Flint, Michigan.

Sisco likes to view his homestyle food as the centerpiece of family comfort. In his 28 years working in Flint public schools as a paraprofessional and football and track coach, he was known to prepare hearty Thanksgiving dinners with all the fixings for students who might have otherwise gone without. His famous mac ‘n’ cheese and cornbread stuffed with bacon are staples at graduations, anniversaries and sporting events.

His philosophy: “Food, family and friends forever. If you have those, you’ll have a very happy life.”

It’s that sense of connectivity that sparked the organizers behind Flint’s new Small Business Boot Camp. They aimed to help hobbyists like Sisco — who already have a connection with the community — through an eight-week program that takes participants from side hustles to income-producing businesses.

More than that, supporters of the course, which started with 14 students in March, hope the program will help the city’s neighborhoods economically.

Laura Sigmon, president of Detroit-based Best Practices Consulting Services, works with a number of business incubators in the Motor City. She also works at Mott Community College in Flint, where she saw an opportunity to replicate the entrepreneurial ecosystem that’s been developing in Detroit.

“I started asking questions about what does neighborhood development look like from an economic development standpoint,” Sigmon says.

Discussions about similar efforts have been taking shape in Flint — even as residents continue to contend with the public health threat of lead-poisoned water — though on a smaller scale, Sigmon says.

The city’s faith-based organizations have served as a focal point for community development for decades. Reginald Flynn, for example, is a Flint pastor who has gone from delivering sermons to plotting economic development efforts for the city’s north side, where Sisco also lives. Flynn is also president of the North Flint Reinvestment Corporation, which is working to bring a food co-op to the neighborhood.

“It really is no different than what Detroit was three years ago. You heard people screaming and hollering about downtown development, but what about the neighborhoods,” Sigmon says. “It was a lot of sideline conversations.”

At the same time that Sigmon started asking questions, research by Mayor Karen Weaver’s administration found that residents wanted economic development in the neighborhoods, and the city had some grant money available to support community improvement efforts.

With Sigmon’s eye for developing entrepreneurs, buy-in from the city, and the work already being done by the area’s faith-based community, Flint’s Small Business Boot Camp became a reality. Sigmon first contacted the mayor’s office in November about her proposal, and by February she was preparing to teach her first class of 14 students, with grant money from the city to start.

To recruit participants, Sigmon reached out to Flynn and Robert Sherman McCathern, founder of Joy Tabernacle Church and director of the Urban Renaissance Center and the Concerned Pastors for Social Action. She also hired a Flint resident to help out on the ground while she split her week between Flint and Detroit, and they passed out flyers and gave presentations to congregants.

She started with a pool of 37 interested applicants and winnowed it down to 14. In July, a ceremony was held at the city’s new Civic Park Centennial Pavilion for 11 graduates. Participants in the inaugural class included a few food-based entrepreneurs, like Sisco, a photographer and a landscaping business owner. During the eight-week boot camp, they developed business plans and learned budgeting and marketing basics.

Sigmon spent just a fraction of her budget, about $20,000. The class met every Saturday in a rented conference room at the Urban Renaissance Center. She also had one-on-one meetings Thursdays and Fridays. Sigmon hopes to get more funds to support the top-performing students in further developing their businesses.

For Sisco, the experience was a culmination of a lifelong love for cooking, inspired by his grandmothers, who both worked in university cafeterias in the South. He started catering as an extension of his involvement in the schools and church, all the while developing a strong following for his food. With the boot camp, he’s taken a food handlers test, created a budget, and has come up with a solid pitch as to why someone should pick Sisco Catering for their next event.

The next step for Sisco is to apply for a loan to expand as a food truck, still a somewhat uncommon sight for Flint.

“All these years, this has been sitting on the back burner, with taking care of my church home, family. Now finally I can make my passion into a business, it’s finally a reality,” Sisco says.