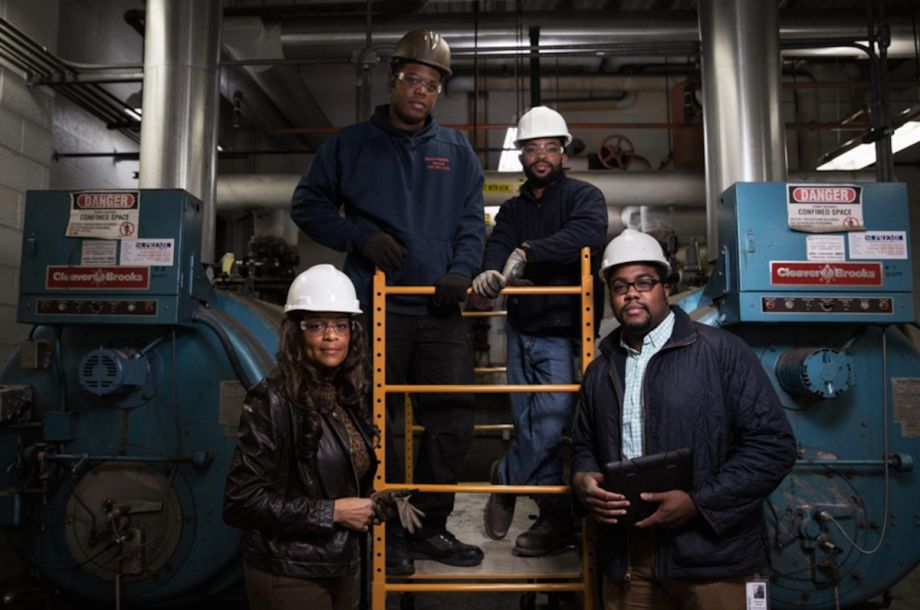 Adrienne Bennett is America’s first African-American woman who is a licensed master plumber. Born in Chicago, her family moved to Detroit when she was nine. When she decided to start her own plumbing and mechanical contracting business in 2007, her son was off at college and her husband had his own career.

Today, her company, Benkari, has a full-time union staff of five. In the last year, they’ve landed a major contract with the Detroit Transportation Corporation to work on the plumbing and heating systems at a key maintenance facility. Beyond that, requests for bids are picking up for commercial renovations and buildouts in downtown Detroit.

“We’re trying to get a little piece of the pie of all this development going on,” says A.K. Bennett, Adrienne’s son, who’s now associate project manager at Benkari.

It’s a development boom that so far has largely left Detroit’s black residents behind. To help change that narrative, the New Economy Initiative (NEI) created the NEIdeas $10,000 Challenge, which recently announced its second year of 30 winning businesses, chosen for their ideas about how they can grow. Benkari was one of them.

“It’s not a lot of money, but we think it will be instrumental in transforming how we do business,” A.K. says. “This will really transform our competitiveness and get us to the next level.”

The bulk of Benkari’s $10,000 will go toward purchasing and implementing a plumbing industry software program that Bennett estimates will allow them to bid on three to five times as many jobs. They’ll also be able to respond to plan changes much more quickly and professionally. To this point they’ve been doing all the estimating work manually, taking weeks on big bids and having to pass on opportunities to bid on smaller jobs during that timeframe. A year from now, with the added efficiency, A.K. estimates the firm may grow to 10 or 12 full-time employees.

Not a huge number of new jobs on face value, but there is more to every story than just numbers.

“The NEIdeas Challenge gives hope to companies like us that sometimes feel like we’re being left out, or don’t have a chance to be at the table,” A.K. says.

Over 500 Detroit-area businesses applied to this year’s challenge, which is open to companies with annual revenue less than $750,000. (Two businesses with higher revenues will win the NEIdeas $100,000 Challenge, to be announced later this month.)

Sixty-eight percent of the NEIdeas challenge’s 2015 winners were minority-owned. (Seventy-one percent were women-owned.) Some have been in business for just a few years; one has been around for nearly six decades. (Twelve foundations fund NEIdeas, including Next City supporters Ford Foundation, John S. and James L. Knight Foundation, and the Surdna Foundation.)

“NEIdeas is an effort to put focus back on existing businesses in Detroit’s footprint,” says Dave Egner, executive director of NEI, who says they work to get such companies into their support system network.

NEI formed in 2007 as a $100 million partnership of 10 foundations, organized by the Community Foundation for Southeast Michigan. It recently announced a $33.5 million recapitalization to continue its work of building a supportive ecosystem for entrepreneurs in the Detroit area. The network now includes 54 small business support organizations, many of them pre-existing NEI, but now receiving grants and other financial support from NEI.

“The big aha moment for us was realizing that the existing businesses and the neighborhood groups didn’t trust the entrepreneurial ecosystem that was established,” Egner says. “There was no faith that that startup set of resources would help if you were in the neighborhood and not necessarily with a college degree, running a family business.”

In order to get existing businesses into the pipeline, NEI learned they needed to make things personal. They deployed an outreach effort for NEIdeas that included a street team to knock on doors and make connections. They placed 17,000 door hangers throughout the region. They deputized 27 organizations, including churches, community development corporations, nonprofits and libraries to serve as ambassador locations, where interested entrepreneurs could find more information and fill out an NEIdeas application.

They got 600 applicants in the first year, and many winners and non-winners became evangelists for the program on their own.

“Now we can take that mapping of 1,100 businesses and their needs and put it into the ecosystem to make sure that everyone has access to technical assistance,” Egner says.

Capital, of course, is one of those needs. Many small businesses aren’t yet ‘bankable’, according to Egner. They’re cash only or don’t keep accurate accounting books, if any at all.

“The competition itself helps set up the technical assistance to make them bankable,” Egner says.

“We’ve learned a lot from just cataloguing the needs of these businesses and that’s driving a lot of our programming leading into 2016,” Egner says. That will include using program-related investments to make high-risk loans to businesses that even CDFIs can’t touch just yet.

“What we have to do now is get down to a level where we’re funding at almost a ‘community venture’ type level, creating a payback cycle that’s making the businesses creditworthy [to] a banking lender like a CDFI in the future,” says Egner. “When we started this work, some of our advisers said only do high growth, because it’ll be too difficult to get down to the under-invested populations. Another group said don’t do high growth because until you take the least represented populations and make them successful, you cannot claim success. What we learned is, we can create a system that does both.”