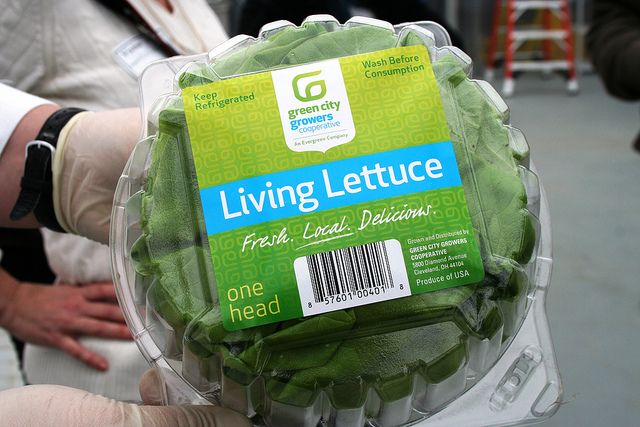 We’re in Cleveland this week for our annual Vanguard conference, so I thought I’d take a look at Cleveland’s own Evergreen Cooperatives, a progressive economic development organization that focuses on strengthening neighborhoods through small, worker-owned businesses that work with large anchor institutions.

Evergreen was launched in 2008 with a simple, yet difficult goal: create living wage-jobs in low-income neighborhoods. They focused on six neighborhoods — an area called the Greater University Circle (GUC) — with 43,000 residents and a median household income below $18,500.

If you’re thinking that government subsidies to bring in huge corporations and years of red tape followed, you’re wrong (thank god). Evergreen’s three worker-owned small businesses tap into the purchasing and procurement power of huge local institutions. The Evergreen Cooperative Laundry, which opened in 2009, is a green laundry facility that provides linens for Cleveland hospitals, hotels, nursing homes and restaurants. They work in a LEED Gold Certified facility.

This green philosophy is in Evergreen’s DNA. Evergreen Energy Solutions, which was started in 2008, is a solar company that designs, develops and installs solar panels for everything from commercial businesses to governmental institutions. I’ve made it clear here before how big a proponent I am of the solar economy. And not because of it’s environmental friendly credentials — but because it creates jobs for everyone, whether it’s a developer with advanced degrees or a construction worker climbing roofs and installing the panels. It provides various jobs inside and outside the knowledge economy, which means a more diverse community.

The third company, Green City Growers Cooperative, is more in the vain of what you see popping up in blighted urban areas in Baltimore and Oakland and Detroit: Urban farms. It’s not just a community garden — which are valuable and important in their own right — but a 3.25-acre hydroponic greenhouse. It opened this February and is currently growing Bibb lettuce, green leaf lettuce, other gourmet lettuces and basil. Green City sells their fresh produce to grocery stores and food service companies in Cleveland and the surrounding areas.

University Circle is home to The Cleveland Clinic, Case Western Reserve University and University Hospitals, three institutions that spend billions of dollars combined each year. “You have billions of dollars of procurement and investment flowing through these institutions in this one zone of the city,” Ted Howard a founding member of the board of the Evergreen Cooperative and executive director of The Democracy Collaborative, told me.

Federal Reserve Board member Sarah Bloom Raskin lauded Evergreen for its new economic development model in a speech to the National Community Reinvestment Coalition in March. I think it’s a smart way for cities to strengthen their neighborhoods and get big institutions involved. The cash flow is staying in town and locals are finding work. (I wrote about this in regards to Detroit’s X Games bid last month, too.)

I asked Howard, who has extensive experience in community and economic development, how Evergreen might be a model for other cities. He offered a caveat. “We’re really learning. When President Kennedy said we’re going to put a man on the moon by the end of the decade. To get to the moon there were all these rocket ships that launched off the pad and then collapsed and exploded. It takes a lot of modeling and sometimes failure.”

I think Howard was being modest. After his Kennedy caveat — which I agree with, all cities are learning — he went on to say that, “The principles that form the basis of what we’re trying to do are really relevant to other communities. What we’re really saying is traditional methods of economic development as practiced in urban areas have severe limitations and indeed many have hit a dead end.”

That’s what is at the heart of Evergreen and what other cities — from Chicago to Los Angeles — should take note of: We’ve got to find other ways to develop small businesses and get locals involved. Subsidies and tax incentives to lure businesses in aren’t doing the trick. Old-fashioned job creators aren’t always creating jobs. Evergreen is not a fix-it-all (Howard called it part of a “broad community building strategy”) and every city doesn’t need a new laundry co-op, but Evergreen is building equity at the neighborhood level and anchor institutions are spending money on those local businesses. You can’t turn a neighborhood around in a flash, but providing livable wages and keeping the cash flow from going elsewhere is a head start.