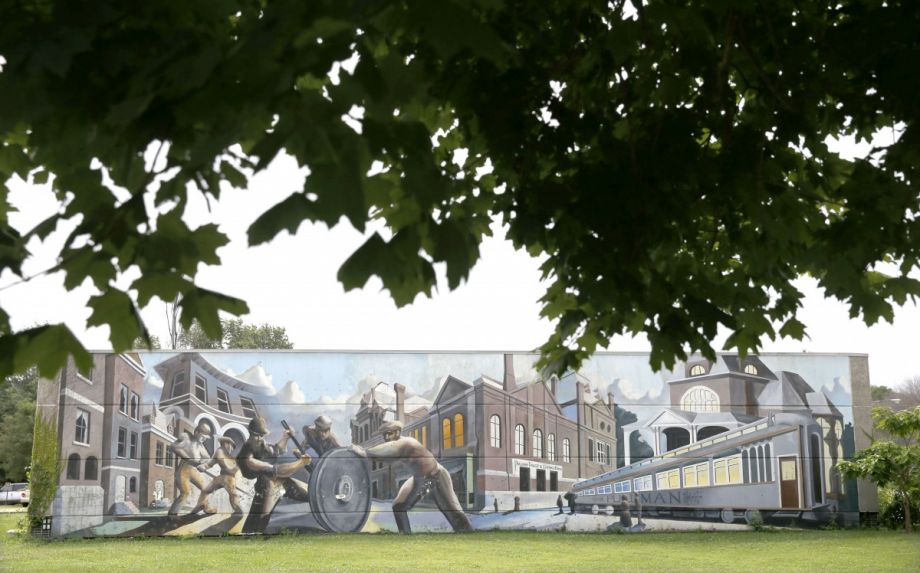 A mural in Chicago's Pullman neighborhood is dedicated to the history of the Pullman railcar company. (AP Photo/Charles Rex Arbogast, File)

Chicago Alderman Anthony Beale is determined to make the Pullman community a symbol of opportunity, and efforts toward that end have been gathering steam. In 2015, then President Barack Obama designated the area, once known for building the famous Pullman railroad cars, a national monument, capping years of community efforts. On the former rail yard, more than $250 million in investments have created 450 construction jobs and 750 permanent jobs so far — many of them covered by local hiring agreements. And this week brings another announcement of a partnership to develop 50 more acres of industrial land, with potential for up to 1,000 more jobs.

“It’s more than symbolic, it’s necessary,” says Natalie Moore, reporter for WBEZ public radio station, and author of “The South Side: A Portrait of Chicago and American Segregation.” “You go into any neighborhood on the South and West Side, you’re going to hear what’s needed are jobs, good-paying jobs, that lead into careers.”

George Pullman created a place for building, storing and maintaining railroad cars, and a planned community to house workers, in the late 19th century. The original buildings, in brilliant red brick Victorian architecture style, were renowned for their beauty. While the company’s labor relations were far from perfect (the Pullman Strike of 1894 eventually spurred the creation of Labor Day), in many places including Chicago, the name “Pullman” eventually came to symbolize a brighter future. After the Pullman yard shutdown in the late 1960s, the site became a Ryerson Steel plant, maintaining at least some of the site’s vitality as source of employment and opportunity. But that plant, along with much of Chicago’s manufacturing base, died a slow death as the decades passed. The plant eventually closed in 2006.

“It all just slowly diminished,” says Beale, who grew up in the adjacent Rosemoor neighborhood, and now represents both areas in City Council. “As a kid you don’t really get it, but as you’re growing up you start seeing it. You start seeing the crime and all of that. Every store you could think of, it was here, and it all slowly left the community.”

There have been setbacks with Pullman on the way to creating the symbol of opportunity. A local bank that had ownership of the site was shut down. Some Chicagoans opposed development plans. Yet through community engagement, a mix of targeted financing and a bit of storytelling craft, the former rail yard site continues on a path to once again being a neighborhood centerpiece.

What It Means to Be a Community Bank

Park National Bank, a Chicago community bank, purchased the old Pullman site from Ryerson Steel in 2008. Bank owner Michael E. Kelly saw potential in the 180 acres, and Park National Initiatives was created as an affiliated nonprofit arm to shepherd development of the site. (Alderman Beale was thrilled.) But the Great Recession loomed — and just as the bank heard it would get $50 million in New Markets Tax Credits, which would’ve helped with the project, federal regulators shut down Park National Bank as part of overall efforts to stem the financial crisis.

The well-loved community bank was folded into Twin Cities-based U.S. Bank. Still, the latter’s executives wanted to honor Park National’s various commitments to its community, including the development of the 180-acre former rail yard in accordance with residents’ needs and wishes. U.S. Bank spun off Chicago Neighborhood Initiatives in 2010 as a separate nonprofit to oversee that process. The bank provided some seed funding to get CNI up and running, and remains an active investor in projects CNI develops at the site.

“If you do the planning and put the things in place to start the development, you can redevelop any area of the city of Chicago, but you have to have the planning to make it happen,” he says. “Having a not-for-profit developer makes it a little easier, I believe.”

U.S. Bank and CNI established an agreement to allow the latter to buy land on the site at a fixed low price per acre (which CNI won’t disclose). The nonprofit then begins site development work and can eventually sell to a buyer like Walmart (the first new development), or keep ownership and rent it to tenants like Ross, Planet Fitness, or local businesses as they begin to show interest in storefronts on the property.

What the Neighborhood Wants

The community’s first priority was addressing its status as a food desert. It was long odds, to say the least, embarking on a local and national search for a grocer that would move into Pullman Park in the middle of a recession. Walmart was the only one to say yes, much to the chagrin of Chicago’s unions and other aldermen. It culminated in a City Hall showdown, with Beale and CNI bussing in hundreds of Pullman-area residents in support of their right to a grocery store.

“I wanted all my colleagues to look my residents in the face and tell them they can’t have fresh produce. They couldn’t do it,” Beale recalls.

Next came a Ross clothing store, and a Planet Fitness, which are CNI’s tenants. Notably, while the capital has come largely via tax incentives like the New Markets Tax Credit program, the companies that move in aren’t getting tax breaks to do so. They’re coming for other reasons.

Take Method, for example. The manufacturer of environmentally friendly soap and other home and personal care products looked at over 100 sites for its first North America factory. Beale and CNI put forth a case based on the site’s existing rail and highway infrastructure, and even more so on Pullman Park’s history as a community built on manufacturing.

“CNI had put together a group of neighborhood leaders,” recalls Andrew Ondracek, senior director of manufacturing and supply chain at Method. “When our team met with them, we really got the sense that we would be part of a neighborhood, part of a community, and bring some of that new-age manufacturing back to this area of rich manufacturing history that Pullman had.”

Method also happens to be a certified B Corporation, which means it aligns its business plan with environmental and social benefits — benefits that include local hiring, and green practices, like renting out their entire rooftop as a greenhouse for Gotham Greens, an urban agriculture enterprise. As Method began to hire at the plant, working through local community meetings and partners to find workers, the company put out a clear message that the jobs didn’t require tons of degrees or prior training.

“We said you don’t need any experience in manufacturing. We’ll train you on how to make soap and everything,” Ondracek says.

There are about 85 employees at the site right now, and there are plans to add another production line with 15 or so more jobs next year. About 40 percent of the employees are from the same ZIP code as the factory, and most of the rest are from adjacent ZIP codes. Now that they’re established as an employer, Ondracek says it’s easy for them to get referrals through current employees to other potential hires in the neighborhood.

Method, Walmart, Ross, Planet Fitness and the incoming Whole Foods distribution center have signed community benefits agreements with local hiring requirements and other concessions (such as matching the architecture of the surrounding neighborhood). The companies must report on local hiring and other goals to CNI and Beale on an annual basis.

“I haven’t had to force anybody into court to enforce a community benefits agreement yet,” Beale says.

CNI is currently leasing another round of storefronts to retailers for its newest development along 111th Street, at the southern end of the former rail yard, down the street from a regional commuter rail station. Part of the construction financing came via a $2 million investment from Benefit Chicago, an initiative led by Chicago Community Trust (Chicago’s main community foundation) that taps into new local sources of capital.

While CNI has signed some national chain tenants like Potbelly, it’s focusing more on locally owned businesses for the 10,000-square-foot 111th Street development. So far, there’s a local dry cleaner chain and a local bakery opening up its first retail location. For this site, financing the construction through the New Markets Tax Credits program allows CNI as landlord to offer reduced rents to local businesses.

In addition to reduced rents, CNI’s affiliated Microfinance Group can also offer local business owners affordable financing for build-outs and working capital to get started at a new location. Eighty-six percent of CNI’s microlending borrowers are black-owned businesses, and largely around the South Side of Chicago — that’s a ready-made network CNI can tap when luring entrepreneurs to Pullman Park.

Meanwhile, just as the Whole Foods distribution center is starting construction (promising 150 permanent jobs, with 60 percent hired locally), Ryan Companies, the same industrial developer that is building the facility announced a new joint partnership with CNI to develop what they’re calling Pullman Crossings, taking up another 50 acres. The development promises multiple industrial warehouse and distribution facilities totaling up to 1.2 million square feet and providing up to 1,000 more jobs.

Beale is excited about Ryan Companies’ national network of clients.

“We believe tapping into their client base is going to give us the ability to do a lot more,” Beale says. “This community has a story. We want you to be part of this story.”