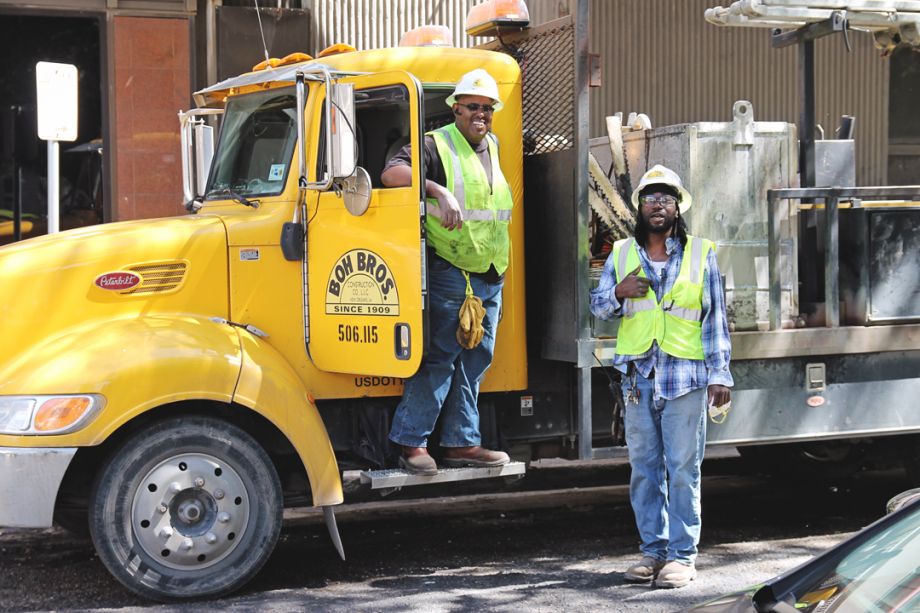 In the last year, city officials in New Orleans, Cleveland and Nashville have found themselves scrambling to protect “hire local” policies from their respective state governments.

In all three cases, racially diverse cities struggling with high rates of poverty and unemployment sought to stimulate the local economy with provisions that focused on creating job opportunities for disadvantaged residents. And in all three cases, state senators representing wealthier, predominantly white districts sought to preempt city policies to protect business interests.

The challenge to local hiring is emblematic of a much broader trend playing out in cities across the country as conservative state legislatures seek to challenge the authority of city governments.

“State intervention is affecting communities in a significant number of states,” says Ben Beach, legal director at the Partnership for Working Families. “Cities are leaders of innovation and effective policymaking in tackling inequality, but we’ve seen some states interfering with that on a range of issues that matter to real people’s lives — including wage theft, minimum wage, paid sick leave and civil rights.”

As the most recent chapter in this trend, these local hiring battles are telling examples of how state preemption is being used to reshape city policies — and how cities are fighting back.

Considering most cities are in need of major infrastructure projects to repair or create new roads, bridges, drinking water and wastewater systems, and public transit, these hiring strategies have emerged as valuable tools for connecting low-income residents and disadvantaged workers to living-wage jobs on construction projects.

It’s not uncommon for these provisions to face pushback from local contractors who fear that added regulation will increase their costs or force them to hire unqualified workers, and pro-business politicians who fear it will be detrimental to business and taxpayer investments. In practice, however, these policies have often been a boon to local economies.

For example, when Los Angeles Metro used targeted hire on a $1.6 billion light-rail construction project, not only were local contractors able to meet and exceed their goals for hiring disadvantaged workers, researchers estimated that for each targeted hire construction worker, $36,800 in economic benefit would flow back into the local economy. This doesn’t include the additional tax revenue gained by employing those who traditionally struggle to find work: According to one analysis, if all L.A. Metro transportation projects employed targeted hire, they would generate $65 million in additional tax revenue. In Seattle’s Elliott Bay Seawall Replacement, contractors likewise exceeded their goal of hiring 15 percent people from economically disadvantaged ZIP codes — and these hires resulted in $4.6 million in wages flowing back into those communities. Similar stories can be told about the practical success and economic benefits of local hire efforts in Oakland, California, Chicago, Illinois and Portland, Oregon.

The strong evidence in support of local hire didn’t quell opposition in Tennessee, however, which became the first state in the nation to seek to ban the policy last fall. State preemption efforts began just weeks after Nashville passed Amendment 3, a local and targeted hire policy that sought to direct 10 percent of the work hours arising from upcoming city works projects to low-income residents and 40 percent to Davidson County residents.

Amendment 3 won more votes than any other initiative on the ballot last summer, and earned broad public support from residents who saw it as an opportunity to fight disproportionately high poverty in the area.

“Nashville is at 3 percent unemployment, but 18 percent poverty, which tells us that wages are too low and jobs are not lifting people out of poverty,” said Jason Freeman, campaigns and community coordinator at the Central Labor Council of Middle Tennessee and Nashville.

Soon after Amendment 3 passed, however, Sen. Jack Johnson introduced a bill to nullify the ordinance and prevent similar policies statewide, noting in a public statement that the city law would result in “increased cost to taxpayers, […] greater administrative costs [and] a chilling effect on the economic growth and development of this area and Tennessee as a whole.”

“From our perspective, Nashville was trying to address systemic poverty and help our local economy,” said Freeman, “and a conservative senator [Johnson] from the wealthiest county in the state [Williamson] took away our ability to do that.”

Johnson’s ban passed in February, and Tennessee became the first state in the nation to prohibit local hiring policies.

Ohio soon followed. Cleveland’s Fannie Lewis Law, which required 20 percent local hire on public contracts over $100,000, had been on the books for over a decade when Republicans in the state senate introduced a ban on all geographic hiring restrictions in April. Though Gov. John Kasich spoke out in support of local hire when running for governor, he signed the ban, HB 180, into law in June in response to vocal support from contractors’ associations who felt local hire placed unnecessary and costly restrictions on business.

For a city that suffers 11.7 percent unemployment overall, and 20.6 percent among people of color, this ban was a “huge disappointment” and a blow to “the very concept of local authority,” said Amanda Woodrum, a researcher at Policy Matters Ohio, an advocacy group that came out in opposition to HB 180. “There was a lot of hope behind the possibilities that policies like local hire could bring to fighting racial and economic inequality in Cleveland. For the state to preempt the city’s wishes violates the basic tenets of home rule.”

Though Cleveland Mayor Frank Jackson noted in a public letter to Kasich that there is “simply no evidence” to support claims that Fannie Lewis raised contracting costs, the law may have been vulnerable to state preemption because of its less-than-stellar track record for implementation. Woodrum noted that while the law was having an impact, many felt it didn’t reach its full potential.

Norman Edwards, president of the American Center for Economic Equality and former executive director for the Ohio-based Black Contractors Group felt more strongly that the law failed on its promises, especially for contractors of color. “If it were enforced, [Fannie Lewis] would have been a good thing,” he explained, but in practice the law was being used to funnel bids to the same, predominantly white, contractors. Edwards was in favor of a targeted hiring policy that would set specific mandates for hiring workers of color and women.

Though many have criticized New Orleans’ uneven recovery post-Katrina, which disproportionately left behind low-income communities and communities of color, the Hire NOLA initiative approved last December represented a renewed commitment to ensure that a significant portion of jobs generated from the $390 million in new construction projects would go to those in the city struggling to find an economic foothold. The plan was to create a workforce pipeline to ensure that people were ready to take city jobs. If all went according to plan, eventually 50 percent of work in city contracts was set to be performed by local labor by 2020, 30 percent of whom would be disadvantaged workers.

Before it could even get up and running, state lawmakers introduced a bill that would ban local hiring provisions statewide.

Where Mayor Mitch Landrieu’s administration saw an opportunity to fight local poverty, some in the state senate worried that the regulation would hinder business. State Senator Conrad Appel, who introduced the bill to nullify Hire NOLA, argued that reserving even a small share of construction jobs for local residents would discriminate against workers from nearby parishes, raise administrative costs and “[turn] businesses off.”

The threat of Appel’s bill spurred a group of advocates, city officials and local residents into action. If Cleveland’s Fannie Lewis law is an example of how hiring policies are only as strong as their implementation, New Orleans’ fight for Hire NOLA is a testament to the power of community engagement.

The mayor’s office had joined forces over two years with employers, job seekers, social service agencies and other key stakeholders to shape the local hire initiative. That’s why, according to Ashleigh Gardere, senior adviser to New Orleans Mayor Mitch Landrieu and director of the Network for Economic Opportunity at the city of New Orleans, the city was able to quickly mobilize opposition to Appel’s ban. A letter of opposition was sent to the governor of Louisiana, and two letters to the editor — one by Landrieu and another by state representative Denise Marcelle — were published in the Times-Picayune and the Baton Rouge Advocate.

With the help of local labor advocates from Stand With Dignity, part of the New Orleans Workers’ Center for Racial Justice, city officials assembled dozens of community stakeholders they had worked with in drafting the policy to testify in support of Hire NOLA. Faced with this supporter turnout at the hearing, on May 23 the House Transportation Committee voted to reject the ban by a 6-8 vote.

Unfortunately, this victory is one of few examples where state preemption efforts have failed. As in Cleveland and Nashville, and numerous other cities, local progressive laws preventing wage theft, increasing inclusionary zoning, requiring living wages, combating predatory lending, strengthening gun control and many others have been overturned in recent years.

So how can city leaders and local advocates fight back? Educating state legislators on the value of protecting local policymaking is key, said Beach.

“We’ve seen that when state legislators have the opportunity to understand the ramifications of state preemption, they tend to vote to preserve local authority and protect residents from powerful special interests that seek to override local policies,” Beach explained, so it’s crucial to educate legislators about the need to protect local policies that address core equity issues — especially those, like Nashville’s Amendment 3, that receive overwhelming support from local voters.

In addition to educating those at the top, grassroots work to engage broad coalitions, including local businesses, in the process of designing and advocating for progressive policies helps build the kind of community support that can help cities challenge state preemption bills.

“It’s got to be the people’s work,” Gardere said. “It’s easy for state legislatures to take down one Ashleigh Gardere, but when you have robust community engagement from the public and private sector, then you have that force, that manpower, to fight back for what you know works.”