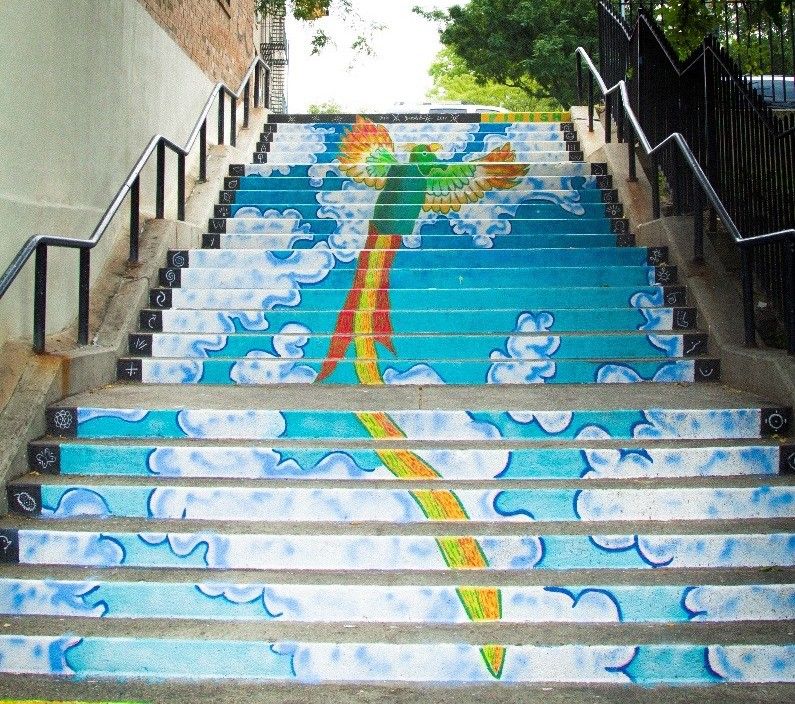 Two bright new murals ascending outdoor staircases in the South Bronx were commissioned not just to beautify the streetscape, but, hopefully, to encourage exercise as well.

The murals, funded by KaBOOM!, were spearheaded by the New York City Departments of Health and Transportation to address the fact that obesity rates in two South Bronx neighborhoods — Morrisania and Crotona — are the highest in the city, at 35 percent. The hope, as Health Commissioner Dr. Mary T. Bassett explained in a statement, is that “adding colorful murals is a way to encourage people in the South Bronx to take the stairs every day.”

The murals are titled “Blue-Winged Warbler,” painted by Diana Perea, and “Rise Up,” created by Josie Gonzalez. Perea’s mural, which can be found at Third Avenue and Weiher Court, depicts the titular bird, which is native to the Bronx, in bright yellow with deep blue wings.

Gonzalez’s mural, installed at Third Avenue and 164th Street, features a mythical bird inspired by images of the Phoenix, Thunderbird, Puerto Rican parrot and Quetzal, which are all “symbols of power and freedom in indigenous, Spanish-speaking communities,” Gonzalez says in the release.

The two artists were selected through an open call led by the nonprofit ArtBridge. They partnered with DreamYard, a South Bronx-based youth arts organization, to host a series of workshops that inspired their designs. The murals are set to remain through July 2018.

This isn’t the first time the Bronx has used the built environment to take on complex public health issues. As Next City covered in 2015, one ambitious project aims to track metrics like asthma rates and pedestrian injuries related to infrastructure upgrades like new park space or improved bike paths and walking trails. A plan to improve access to recreational space on Randalls Island also seeks to improve community health.