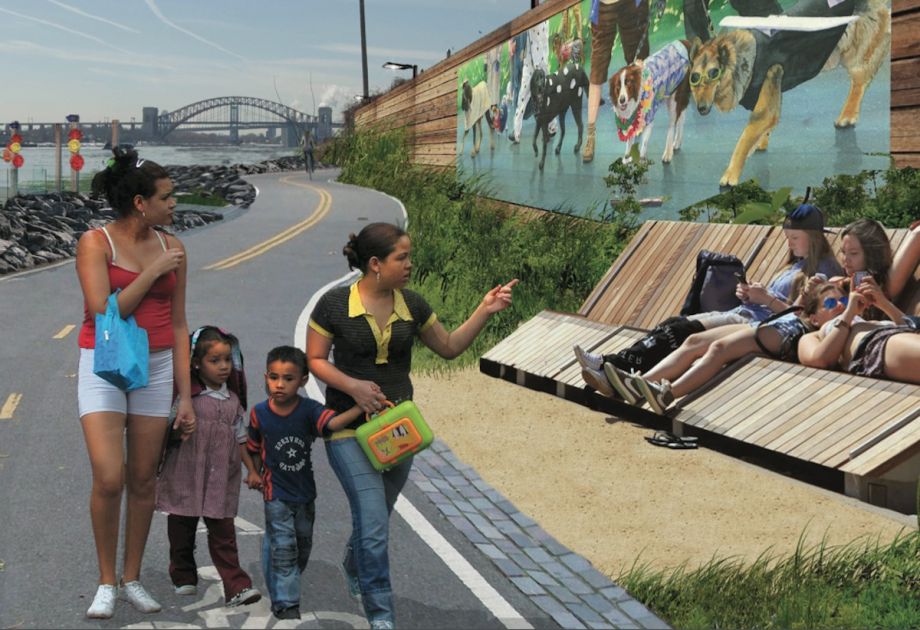 It’s no secret that your surroundings impact your health. The fact that living near parks and active transportation networks can literally add years to your life is so intuitive that we don’t really need studies showing cause and effect.

But according to Deborah Marton, that research could actually be helpful. And because connections between infrastructure and personal behavior seem so overt, public health professionals don’t often look deeply at their nuanced specifics on a neighborhood-by-neighborhood level.

“Public health is intimately tied to the environment — it’s so obvious,” she says. “But that connection hasn’t been explicitly made.”

Marton is the executive director of the New York Restoration Project (NYRP). Today, her organization released the blueprint of a project that aims to chronicle exactly how infrastructure improvements impact the health of those around them through years of data collection and analysis.

First, those improvements need to be made. If funded, the Haven Project will upgrade key open spaces and connectors throughout the Mott Haven and Port Morris neighborhoods in the South Bronx. (The Knight Foundation, which also provides funding support to Next City, helped finance the project’s planning phase).

In those two neighborhoods, 45 percent of residents fall below the federal poverty level, according to NYRP’s report. Meanwhile, a combination of old industrial lots and freeways make the community relatively park-poor compared to the rest of the city. Residents suffer from high rates of asthma, obesity and diabetes.

The Haven Project would instigate a series of upgrades, each tied to specific health outcomes. Along with parks, NYRP proposes better sidewalks, a waterfront trail, bike lanes and a number of on-street safety upgrades. According to the project’s proposition, changes would follow available health research.

“Air quality in the South Bronx is better along the waterfront, where wind disperses pollutants harmful to human health,” the document states. “Therefore, the plan proposes a series of waterfront parks.”

Those front-end analytics aren’t particularly unique. From the Center for Disease Control’s Healthy Community Design Initiative to San Francisco’s Walk First database (which I wrote about here), cities across the country are increasingly gathering real numbers — whether about asthma rates or pedestrian safety — and using them to inform design.

What makes this project so interesting is the back end. Through partnerships with Montefiore Medical Center, Columbia University and HealthxDesign, the Haven Project intends to track metrics post-construction to see whether — and how — built improvements actually affect public health.

“What hasn’t been done [before] is something at the neighborhood scale, looking at all those explicit causes and links,” Marton says, adding that such research could help other organizations access funding and invest more intelligently in their physical surroundings.

Rupal Sanghvi, founder of HealthxDesign, explains how some of these “causes and links” would be measured.

“We’ll be looking at medical records, diabetes rates, community health surveys and multiple data sources over at least the next five to seven years,” she says.

The report couples each infrastructure improvement with the health outcomes that researchers will track. For pedestrian upgrades, intended metrics include active transportation, physical activity, collective BMI, chronic stress and perceived safety. When it comes to open space access, similar goals are outlined, with intended impacts including cardiovascular, respiratory and mental health, along with neighborhood safety and local economic investment.

According to Sanghvi, whose organization has tracked everything from urban agriculture to food retail, the project uses standard public health methodology.

What makes it different, she says, is that the project is engaged “in conversation with designers, not physicians or health policymakers.”

With so many city programs focused on data-driven design, post-construction data collection does seem like a logical next step — a way of checking biases and revealing unexpected trends.

In San Francisco, for example, collecting hard numbers on crashes has revealed telling specifics beneath commonly held theories, including patterns about speed and left-hand turns. Once streets are modified, checking those improvements over time would reveal new patterns and serve as a set of best-practice do’s (and, undoubtedly, don’ts) for other agencies looking to make and fund change.

Of course, that’s precisely the kind of long, long-range planning that cash-strapped public agencies aren’t exactly known to finance. And for now, the Haven Project’s funding hasn’t been finalized, though Marton says the organization is in talks with both the city, currently looking toward Fiscal Year 2017, and private organizations.

But she remains confident that the project’s unique focus and long list of partnerships across the academic-public-private-nonprofit divides will help the project go from booklet to reality.

“So far, all that NYRP has created has been a plan,” she says. “But all the agencies listed [16 local businesses, 31 community-based organizations, 6 elected officials’ offices, and 14 state and city agencies] have participated in the process.”