In June 2013, more than 50 young leaders gathered in Cleveland to collectively learn and think about how to improve our cities. We traveled to the Rust Belt city for Vanguard, Next City’s experiential urban leadership conference.

During our time in the city, Vanguards participated in a series of presentations, workshops, tours and other activities, visiting over 25 different places in and around Downtown Cleveland. The intimate conference is designed to spark interactions and exchange among attendees, who together represented over 30 cities.

Ultimately, Vanguard is shaped by the synergy of the crowd, which included a fresh crop of energetic Vanguards from around the country and dedicated alumni from previous years, like Evelyn Burnett of Neighborhood Progress Inc, Abby Wilson and Sarah Szurpicki of the Great Lakes Urban Exchange (GLUE) in Detroit and Randy Vines of STL-Style in St. Louis, alongside Next City staff, board members, and the invaluable local host committee representatives, who played an integral role in designing our Cleveland experience.

The conversations between the Vanguards, formal and informal, touched on all manner of urban policy and life. “They talked about bringing mass transit to Honolulu,” writes Vanguard Megan Dickerson. “They shared vignettes about using street art as transformative youth development. They touched on the challenges of working in cities where you want to walk, but you’re not sure where the sidewalk will suddenly disappear; of training new urban leaders in Cairo; of managing the recovery of a subway system after Hurricane Sandy.”

Vanguard attendees posted over 300 snapshots of their conference adventures in Cleveland on Instagram. If you’re thinking about visiting the Rust Belt city, this crowd-sourced photo gallery will give you plenty of travel ideas, including the touristed destinations and alternative spots very worthy of a visitor’s attention.

Here, Melissa Sobolik, City Commissioner of Fargo, N.D., gives an impressive recap of her life in numbers: 19 equals the population of her hometown, and 110K is the population of Fargo, where 30.2 is the median age yet 55-73 is the average age of elected city leaders. In 2010, Sobolik ran for city commissioner and came in third (2010=3). In 2012, she ran again and won (2012=1)! 1×3 translates to one year under her belt, as the only woman and the youngest member. When asked what the best skill for running for local office is, Sobolik replied, “Learn how to ask good questions.” 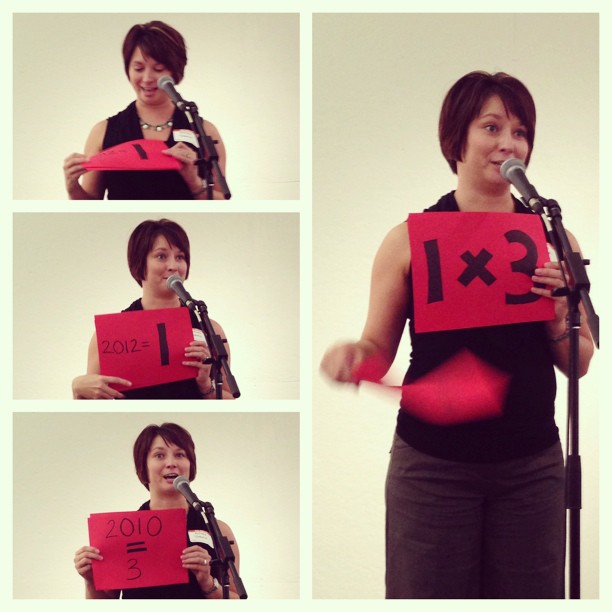 First stop on the trolley tour of Cleveland’s Urban Agriculture Innovation Zone was the Rid-All Green Partnership, an urban farm and educational resource in Cleveland’s southeast started and operated by three childhood friends who grew up in the area. “Farms like Rid-All Green Partnership in a desolate section of the Kinsman neighborhood long known as the ‘Forgotten Triangle’ represent the beginning of a more systematic reform of zoning and redefinition of what constitutes the ‘best use’ of underpopulated urban land,” reported Next City’s Zoe Mueller in a story about Ohio’s agriculture systems.

Vanguards also visited the high-tech Green City Growers plant, part of the Evergreen Cooperative’s economic development engine and met residents who’ve transformed vacant land into community gardens and orchards. “It was when I saw Ohio City Farm that I realized I had underestimated Cleveland,” said 2013 Vanguard class member Alex Dodds, Online Communications Manager at Smart Growth America. “Neat rows of lettuce were laid out in the crook of a parking lot across from an apartment building, all overlooking the city skyline. No one had expected to see a nearly 6 acre farm just a short walk from the RAPID station.” 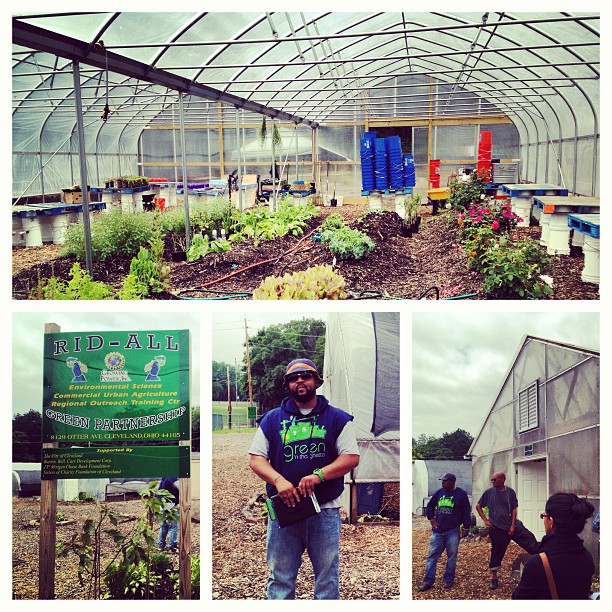 Vanguards who participated in a boat tour had a chance to see how Clevelanders are reclaiming the Cuyahoga River, infamous for catching on fire in 1969 and, with its flames, becoming a catalyst for Congress to pass the Clean Water Act. The boat docked at the Rivergate Park, where Cleveland Rowing Foundation board member Bill Braun filled the Vanguards in on how nonprofits like his are reshaping the city’s relationship to water.

The trip would not have been complete without a tour of the Ohio City Bike Co-op. Though you might not know it from his warm demeanor, director Jim Sheehan runs a tight ship, ensuring volunteers are well trained in bicycle maintenance and repair. Laura Kushnick Wiegand of the Downtown Cleveland Alliance explains that current and planned waterfront uses include everything “from mixed-use development at North Coast Harbor and the newly completed Flats East Bank, to sailing, to bike and pedestrian access via the extension of the Towpath and Lakelink Trails.” 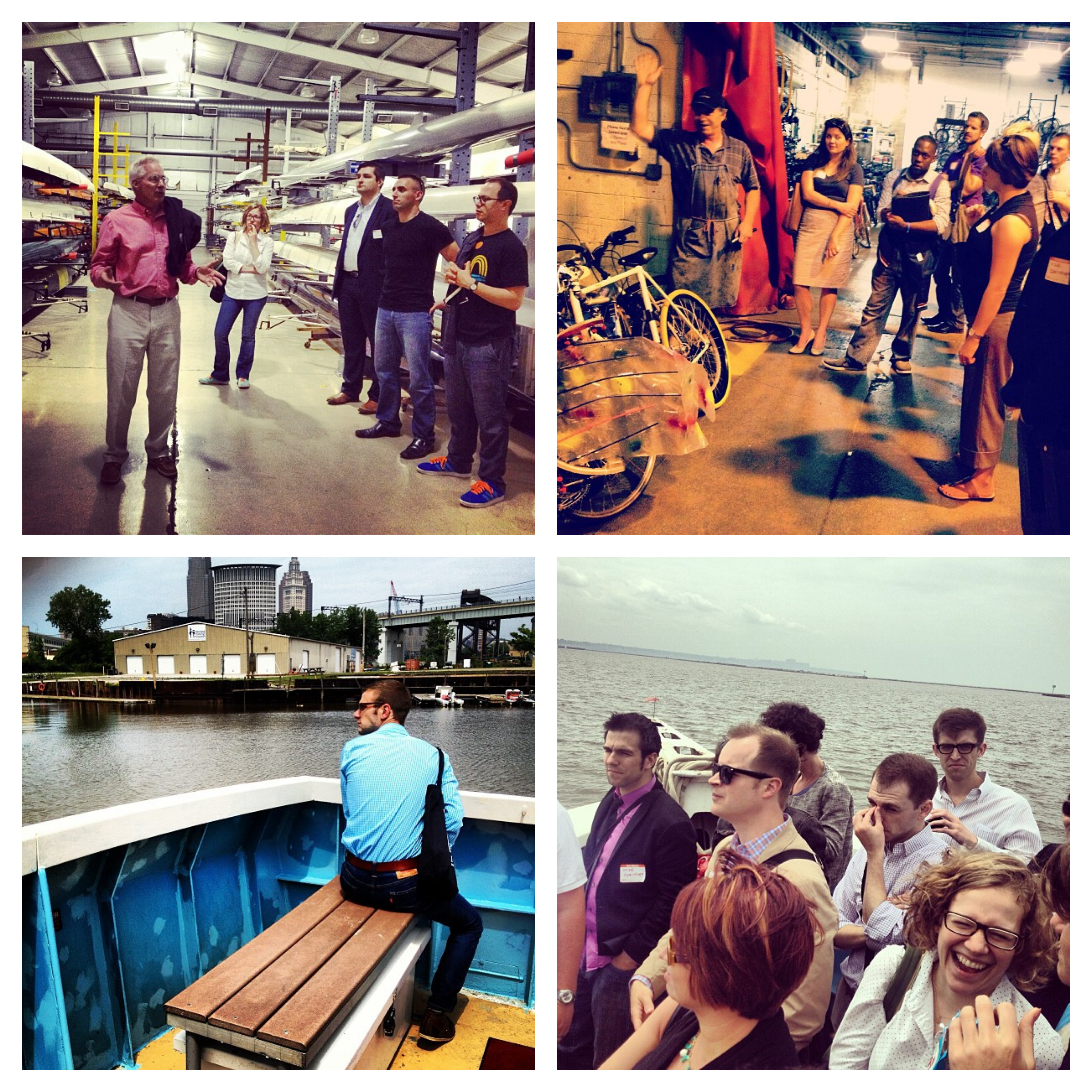 Day two of the conference was held at the Museum of Contemporary Art. The new building was designed by internationally renowned architect Farshid Moussavi. Surrounded by new construction in the University Circle District on Cleveland’s east side, the museum’s meticulously laid out public plaza, designed by James Corner Field Operations, is a great perch for people-watching and of course, conspiring to build better cities. On September 23 in Manhattan, Next City will continue the conversation about public spaces with the Friends of the High Line, which is presenting a talk with Corner and Eloise Hirsh about Transforming Staten Island in New York. 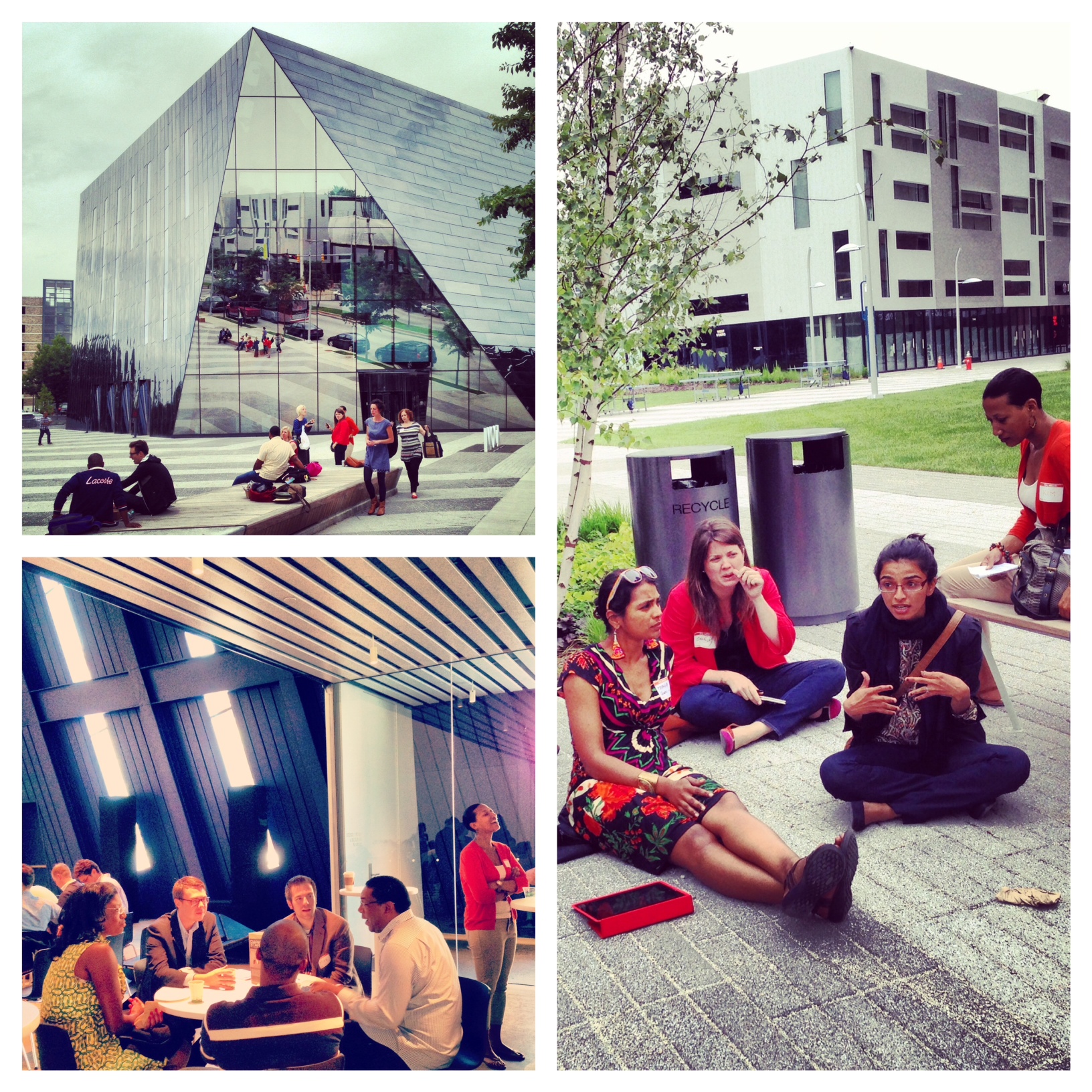 The Vanguard wrapped its final day in Cleveland in North Shore Collinwood, learning about the neighborhood’s ongoing rebound from community-based advocates and entrepreneurs such as Beachland Ballroom owner Cindy Barber, Seth Beattie of the Community Partnership for Arts and Culture and Jack Storey, Vanguard Host Committee member and founder of Saving Cities.

The conference closed with a screening of the documentary Red, White & Blueprints (see the trailer below) at the historic LaSalle Theater, a 1927 cinema house on E. 185th Street recently purchased by and in the process of being restored by Northeast Shores CDC. 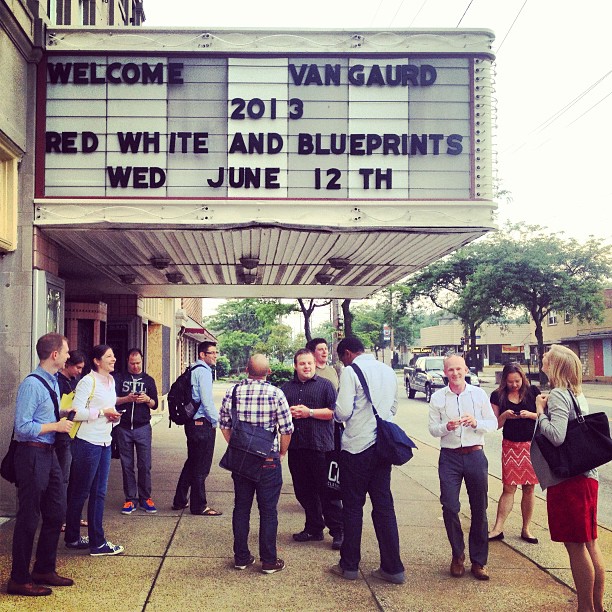 Read All About It

“They came to learn and to admire – and they came away amazed…” wrote urbanist writer Steven Litt in Cleveland’s Plain Dealer. “Their concerns provided a glimpse of how the next generation of urban affairs experts might run American cities in the future. Clearly, they were worried that the influx of twenty-somethings in cities across the country is not resulting in broad benefits to the less fortunate.”

Litt’s review, titled Next City Vanguard Conference in Cleveland showed how millennials might lead American cities, offers a glimpse of the conference experience and the dialogue generated among attendees through informal workshops and experiential tours. If you’re looking for a regular urbanist perspective on the built environment in the rock and roll capital of the world, bookmark Litt’s column.

For more media insight about Vanguard, Fresh Water Cleveland asks if cities can diversify beyond the ‘cupcake economy’, a big topic of conversation among Vanguards, and Next City’s editor in chief Diana Lind breaks to chat with WKSU-FM, Cleveland’s top public radio station.

Participants in this year’s conference used the hashtag #Vanguard13 to live-tweet their experience in 140 characters or less. Over the course of two days, nearly 700 tweets were dispatched from Cleveland.

In Their Own Words

A number of 2013 Vanguard class members have already written about their experiences on their own websites and blogs, and we hope to add to the list.

“One of my favorite discussions of the conference happened during a workshop led by Lou Huang of Code for America and Dan Miller of Fundrise. Both are working on projects that serve long-range goals and empower long-term systemic change in our communities,” writes urban designer and civic specialist Mallory Baches, Founder and Director of The Civic Hub.

“Great opportunity exists when you have the courage and initiative to actually start, even when the journey is long and you don’t have every answer already. It is easy to get bogged down with perfecting every aspect of a project still on the drafting boards, but none of the Vanguards would have been there without actually producing a lot already. So go ahead and put it out there, whatever it is.”

Cleveland resident Krissie Wells, a 2012 Vanguard alum and Host Committee member, explains the route she selected for the bike tour which traveled “through Ohio City, Detroit Shoreway, and Stockyards to show the various ways that different neighborhoods are approaching redevelopment, and the opportunities and challenges that each neighborhood faces.” 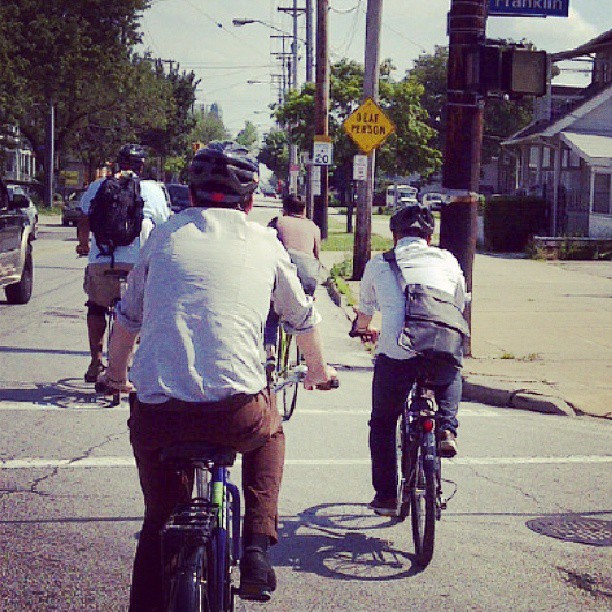 After fielding questions from fellow Vanguards about the performance of Jacksonville, Fla. Mayor Alvin Brown and the Better Jacksonville Plan, planner Ennis Davis revealed, “soon it became apparent, to my surprise, that Jacksonville isn’t a complete afterthought to the rest of the country.”

It seems fitting to close with an excerpt from Megan Dickerson, play advocate and Senior Manager of Community Partnerships at the Boston Children’s Museum.

“Whereas many conferences mush into a maelstrom of competing self-promotion, the folks at this convening were focused on the what-if; the what-could-be; the let’s-try-it-and-see-what-happens,” writes Dickerson.

“The focus was action and straight-up hope. Sure, you could chalk this hopefulness up to the idealism of age. We’re all under 40, we believe in the power of cities, and we are willing to seek out a Cleveland karaoke bar on a weeknight. But it’s not about age. Let’s face it: many of of us in this group are in our 30s and have more than ten years of management experience. We have heard shouts of ‘more creativity! more innovation!’ transformed into double-talk via actual decision-making. One Vanguard class member told the story of how she once overheard someone say that an idea (for an innovation competition, believe it or not) was ‘too new.’ Via chronic naysaying, we could have lost our idealism a long time ago. But we haven’t.”