An Innovation to Celebrate on World Toilet Day – Next City

An Innovation to Celebrate on World Toilet Day 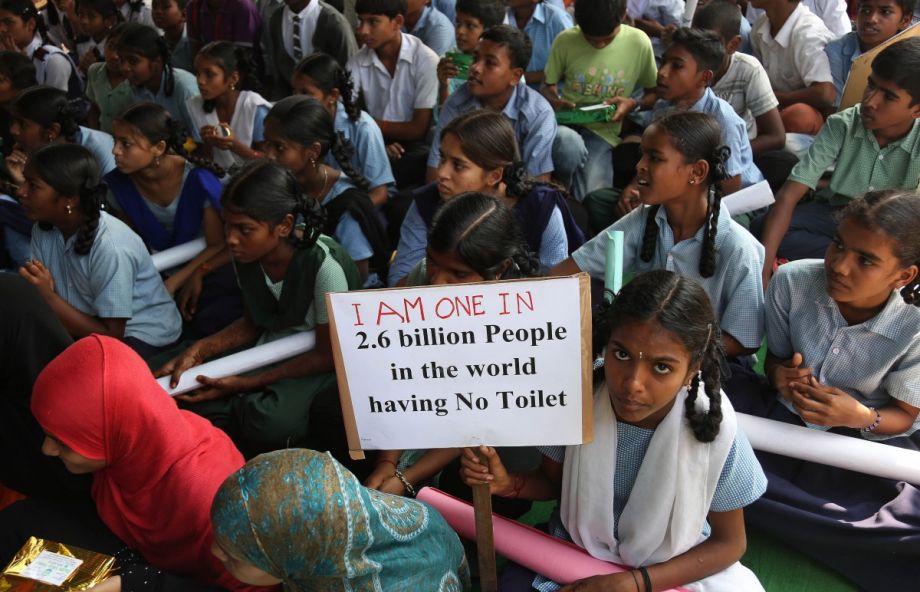 Indian children participate in a rally to mark World Toilet Day in 2014. (AP Photo/Mahesh Kumar A.)

More than 150 years after civil engineer Joseph Bazalgette designed a system of interconnecting sewer pipes that led out of London — and away from the River Thames — 40 percent of the world’s population lives without accessible toilets. This week, on November 19th, World Toilet Day will highlight how far we need to go before some version of Bazalgette’s modern sanitation system, a critical advancement in urban planning and health, is available to all.

Many people in that 40 percent live in rapidly growing, lower-income urban areas of the developing world. A 2010 Amnesty International report found that 68 percent of the slums in Nairobi, Kenya, have shared bathroom facilities that serve far more people than can actually access them. Another 6 percent of Nairobi’s slums have no toilets at all. Worse, available toilets are reminiscent of Georgian England: Pit latrines fill and must be emptied by workers.

Sanivation, a company in Kenya, says they have a solution.

“NGOs were building a lot of latrines, but there wasn’t any provision for when the latrines filled up,” says Andrew Foote, CEO and co-founder of the company. “So we thought about how important it was to look at the whole value chain.”

The company isn’t reinterpreting Bazalgette’s sewer system, but rather devising an alternative to the complex sewage piping that developing-world cities lack. Sanivation installs container toilets in family homes in Kenya for free, and then charges a fee for monthly servicing. After collecting the waste, Sanivation taps another historical model of waste management: using it for fuel. Sanivation recycles the human waste into charcoal briquettes, which the company sells to people who use them in lieu of gas for home cooking, heating and other purposes. The company opened its first waste-processing site in Naivasha, northwest of Nairobi, in September.

According to Foote, the approach conquers several public health issues at once. After all, London’s 19th-century sanitation innovation had a lot more than improving the smell of the city to show for it. In 1832, a cholera epidemic killed over 6,500 people and sparked widespread terror. In 1854, an even larger outbreak prompted the discovery that water made impure by human waste was spreading the disease. Safer waste disposal helped clean the water supply, which brought about benefits including, but not limited to, an end to avoidable deaths by diarrheal disease.

Sanivation’s strategy will contribute to the same shift. Worldwide, sanitation improvements often focus on saving the 700,000 children who still die of diarrheal disease worldwide each year. (Foote says a motivating factor in his work was that “diarrheal disease is the second leading cause of death.”)

The waste-to-charcoal system also improves public safety. Impoverished urban neighborhoods (such as Kibera, a million-strong slum not far from Sanivation’s headquarters) are often places of prevalent violence. People going to public bathroom facilities at night are often subject to robbery, assault or, in the case of women and girls, sexual violence. Improvised solutions, like “flying toilets,” a plastic bag used as a receptacle for excretion that’s then tossed onto rooftops or into gutters, prevent violence, but only at the cost of disease risk. Private toilets inside homes offer a safer way to remove the risk from many lives.

The environmental benefits of the charcoal briquettes might alleviate violence in a more indirect way. By obviating the need to use charcoal from trees as a source of fuel, the new toilet system can boost Kenya’s environmental “Green Belt Movement.” Made famous by Kenyan Nobel Peace Prize winner Wangari Maathai, the effort connects environmental conservation to prevention of conflict.

“In a few decades, the relationship between the environment, resources and conflict may seem almost as obvious as the connection we see today between human rights, democracy and peace,” she said in a statement that prophesied the massive migration and periodic violence connected to environmental issues today.

This is a lot for a toilet to achieve, and Sanivation, which hopes to serve one million people by 2020, admits it comes at a price. While the post-waste charcoal briquettes sell at market price, Foote cites a $6-per-month servicing fee per household for the container toilets. It’s an exceptional amount for a population whose average wage, the company figures, is $7 a day.

“We won’t be financially sustainable as a private model for sanitation for the poorest of the poor,” Foote says, explaining that safely processing the waste is the most costly step in the process. “We’d feel really good if we can just be financially sustainable one rung up from there. That’s already a huge innovation. All the other sanitation systems in the world have been done through government subsidy.”

Although Bazalgette’s innovation in London might remain the definitive solution to sanitation, Sanivation’s innovation is an important part of a global goal of more equitable access to toilets. “The number of urban people served by sanitation is growing,” Foote says. “We are feeling really excited about helping that.”