“I just want my people out here”: A growing number of initiatives in Detroit are working to redefine outdoor activities as acts of liberation. 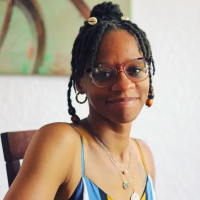 Ian Solomon is founder of Amplify Outside, one of several initiatives emerging from Detroit to help eliminate obstacles to people of color accessing nature. (Photo by Nick Hagen / Planet Detroit)

Detroiter Ian Solomon began building a deep relationship with the outdoors while attending college in Arizona for broadcast journalism. He’d never been in a place with such access to mountains and nature before, and he quickly fell in love.

But during his forays into the wilderness, he often felt like he was entering predominantly white spaces. He soon began to see the outdoors as a privilege to which other Black and Brown people should have access. His efforts led him to launch Amplify Outside, one of several initiatives emerging from Detroit to help eliminate obstacles to people of color accessing nature.

According to a study by the Outdoor Foundation, 72% of outdoor participants in 2020 were white. Black and Hispanic Americans are both underrepresented in outdoor recreation activities, and just 38% of Black Americans ages six and over participated in 2020, down from 40 percent in 2019.

There are important reasons for this, according to Solomon. “A lot of our history as being Black Americans in the outdoors is kind of negative – you think about slavery and lynching,” he says. “There’s a lot of access barriers for Black people outdoors, but sometimes it’s just as simple as we don’t know where to go and we didn’t know this was an option.”

The disconnect with nature for Black and Brown people goes beyond access. Scholar Carolyn Finney, author of “Black Faces, White Spaces,” notes that Black Americans’ relationship with the outdoors and the environment has historically been dictated for them.

“The idea that as African Americans – being held captive, being made to work the land and engage with non-human nature under the threat of the lash or death, being someone else’s property (like the property that they worked) – that’s gonna have some impact,” Finney explained in a podcast. The dominant narratives on how we should interact with nature – mostly involving conservation and preservation, concepts created and enforced by white authorities – are also at odds with how many Black people understand nature, she says.

The idea to launch an organization to help people of color access the outdoors hit Solomon on his 23rd birthday while camping with a friend in Colorado. Feeling “overjoyed and overwhelmed” about the beauty of the natural environment he was experiencing, he thought to himself, “I just want my people out here.”

“When it comes to reclaiming our relationship to nature, what we're really doing is reclaiming power,” Ian Solomon says. (Photo by Nick Hagen / Planet Detroit)

He envisioned joyful Black and Brown bodies relaxing near a campfire with their tents, amid a feeling of peace and relaxation – something he felt that people of color deserve, especially amid an ongoing pandemic that has caused so many to turn to nature.

So he decided to make his vision a reality. He started by launching Amplify Detroit with social media accounts on Instagram, TikTok and Twitter in 2021. He soon gained a following by bringing the beauty of the outdoors to screens to display possibilities for Black and Brown people they might not have imagined for themselves.

The posts feature Black and Brown folks enjoying camping, paddling, fishing and more, along with facts about parks in Michigan, distance from Detroit and how to get there, and information about the natural lands within the city.

“At the end of the day, we’re all humans, come from the earth, and are naturally inclined to have this strong connection to nature. And it’s beneficial for our health – mentally and physically,” Solomon says. “So when it comes to reclaiming our relationship to nature, what we’re really doing is reclaiming power.”

Solomon’s first step was conducting a survey of Black locals to gauge their interest and relationship to nature and better understand the barriers preventing them from enjoying outdoor recreational opportunities in Michigan.

The two-part survey, which captured opinions from over 200 Black Michiganders, concluded that Black people are interested in being outdoors. About 85% of those surveyed said they were “very interested” in the outdoors. “People want to do this – they just don’t know how,” Solomon says.

A lack of resources and accessibility were the two main barriers the survey identified. Many Detroiters lack reliable transportation and confidence to navigate areas outside their immediate environment due to a lack of comfort caused by racism. Metro Detroit was ranked the most segregated region in the nation among regions with a population greater than 200,000.

Solomon says that many survey respondents feared that they “just feel like I’m gonna be the only Black person there” if they ventured outside of their neighborhoods into regional parks.

That was how Sheba Rogers felt when she thought about trying kayaking. So she was excited to attend the annual Browns, Blacks and Kayaks event held by Black to the Land Coalition, another Detroit-based group that focuses on providing cost-efficient outdoor activities for Black and Brown people.

“I feel that it is 100% important to have Black-centered spaces,” said one attendee of the Browns, Blacks and Kayaks event. (Photo by Nick Hagen / Planet Detroit)

Rogers initially attended because of friends mentioning the event, and later reflected on the beauty in the intention Black to the Land had seemed to set. “I think the intention [was] rooted in something much deeper than just an event. It was rooted in education, exposure, grounding, and our well-being,” she says.

The organization hosts several events throughout the year that cater to Black and other people of color, including opportunities for hiking, camping, kayaking and other nature-centered events. Their annual Browns, Blacks and Kayaks event is a staple event for them. It offers affordable kayaking, food options, and plenty of space specifically for Black and Brown people to simply “be” in nature.

Participants said the experience went beyond just kayaking as an activity. “You saw a family set up in their tents, just hanging out for the day. It was a time to really relax and not just come for one thing and leave,” Rogers says. “We looked into the water and we saw fish, and we saw turtles and it was just very intimate to be that close to the water like that.”

For Rogers, having an organized activity to cater to people of color helped her overcome her reticence about trying a new outdoor sport.

Solomon plans to use his survey results to build solutions to the challenges preventing Black and Brown people from enjoying recreational activities. The organization is raising money to create a mutual aid fund to support those who want to engage in outdoor activities but don’t have the means.

“We’ll have tents, sleeping bags, and everything else you would need to have an outdoor experience. We’ll also have cash for gas because, again, there is a big economic barrier, although the outdoors is free,” he says.

In the meantime, Amplify Outside has hosted meetups for hikes with like-minded organizations like Outdoor Afro to create a sense of community for Black and Brown people. Solomon says people of all ages and experiences attend walks and leave satisfied and ready for the next event.

“I hope that this kind of work starts larger conversations that go beyond outdoor recreation and really get into what we need as a community for liberation,” Solomon says. “So, as much as this is about having fun outside, it’s also about attacking these systems that have kept us back as a community has affected our physical and mental health.”