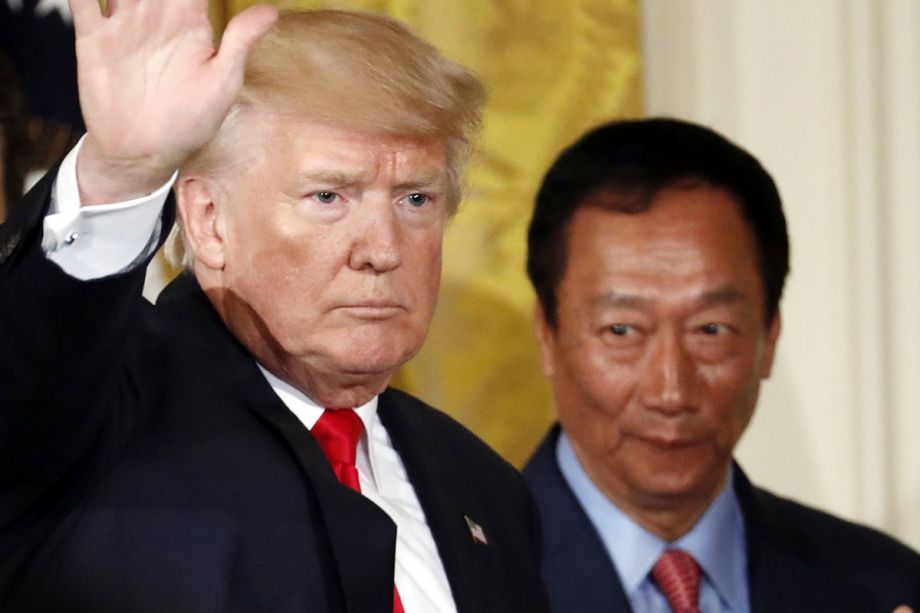 Taiwanese manufacturer Foxconn announced Wednesday plans to build a $10 billion plant in Wisconsin, with $3 billion in incentives slated to come from the state. President Donald Trump is taking credit for the deal, but critics of so-called “corporate welfare” have questions about the incentives package — especially with Foxconn’s questionable record in the U.S.

Foxconn will invest $10 billion over four years for the 20-million square foot LCD display panel screen plant, which could employ roughly 13,000, according to Reuters.

“If I didn’t get elected, he definitely wouldn’t be spending $10 billion,” President Trump reportedly said of Foxconn chairman Terry Gou Wednesday. “This is a great day for America.

But Foxconn has what Reuters calls “a mixed record” stateside in the area of making good on promises to create new jobs. In 2013, the company announced plans to invest $30 million and hire 500 workers for a factory in Pennsylvania — a facility that never materialized.

The $3 billion in tax incentives would be awarded over 20 years if Foxconn meets hiring targets and the state legislature approves the package. But Wisconsin Democratic Senator Jennifer Shilling has reportedly questioned whether there is “legislative appetite for a $1 (billion) to $3 billion corporate welfare package,” according to Reuters. “The bottom line is this company has a concerning track record of big announcements with little follow-through.”

Good Jobs First, a nonprofit that tracks government subsidies and promotes public accountability nationwide, was also critical of the deal.

“The possibility of a tax-break package worth between $1 [billion] and $3 billion for just one project — and for an employer so controversial as Foxconn — raises many profound policy questions for the United States,” Greg LeRoy, executive director of the organization, said in a statement.

LeRoy raised questions about where the facility will be located — a detail that hasn’t been announced yet — and pointed out that Wisconsin taxpayers may not see as many jobs as the deal would lead them to believe. Technology workplaces often bring in their managers and highest-paid employees from afar, and if the plant is located in the Kenosha-Racine area, workers may cross the border from Illinois.

“President Trump is … blessing the ‘buffalo hunting’ school of economic development, in which a few companies get huge ‘megadeals’ while programs that benefit many employers suffer budget cuts, and small businesses and entrepreneurs get shortchanged,” LeRoy wrote. “We hope Foxconn creates lots of great jobs, but the ‘war among states’ way in which the United States allows even foreign corporations to extract huge taxpayer subsidies is a troubling reminder of how federalism undermines economic development in America.”

In fact, mega-tax breaks from cities and municipalities toward large companies don’t always pan out in their favor. From affordable housing complexes that don’t actually offer much affordable housing to data centers that don’t employ many workers, local governments need to tread carefully when trying to lure employers in.