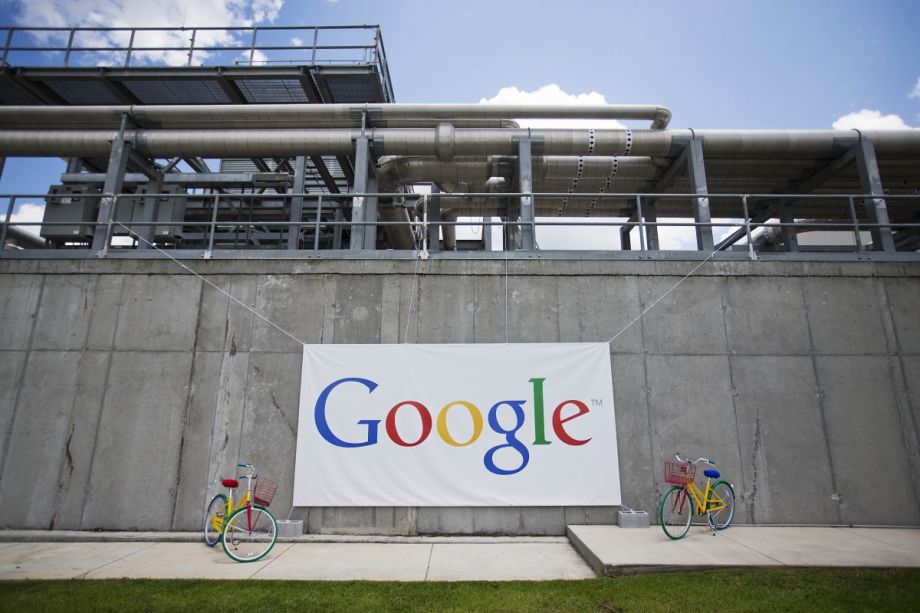 Apple, Google, Microsoft and the other tech giants are building new, highly subsidized data centers in the U.S. by playing a very old game: pitting states and localities against each other in a competition to offer the biggest tax breaks. The winner (loser?) gets a data center in their municipality and the promise of jobs.

But as a new report by GoodJobsFirst.org details, these energy-intensive server farms actually employ very few permanent workers, and the massive tax breaks they often receive end up canceling out whatever tax revenue those jobs might create. In one of the 11 megadeals profiled in the report, Apple received $321 million worth of subsidies to build a $1 billion data center in North Carolina that permanently employed just 50 people after construction was over. That’s a cost to taxpayers of $6.4 million per job. Those workers will never pay back $6.4 million more in state in local taxes than they consume in public services, while the companies that employ them are often exempted from property and other taxes. Either way you slice it, taxpayers lose.

As the report, “Money Lost to the Cloud,” outlines, this situation defies common sense. Tech companies must build more data centers as internet demand grows, and subsidies are often negotiated in the last phase of the site selection process. More important than tax incentives are choosing a site that’s not overly prone to natural disasters or in a state with a low cost of electricity, which accounts for the majority of a data center’s operating expenses. Thus, the tax breaks states are offering “often don’t function as true economic development incentives; that is, they don’t cause something to happen that wouldn’t otherwise,” the report states. “Instead, public officials routinely pay companies to do what they were already planning to do.”

Twenty-seven states have economic development incentive programs specifically designed to attract data centers. The majority of these involve sales and use tax exemptions which can save companies between 5 and 7 percent on equipment costs. Because they’re structured as tax-code provisions, not commerce agency programs, information on how much states are spending on these programs is hard to track. According to the report, only 15 states have easily available data. Washington’s program is the most expensive, at $57.4 million in fiscal year 2016. 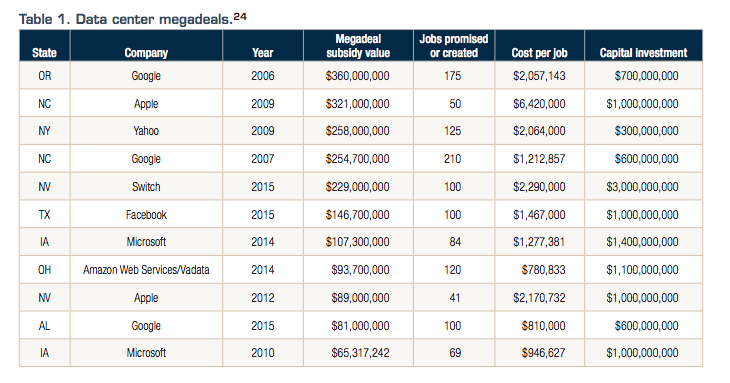 Many states provide subsidies using the traditional channels, too, including property tax abatement, investment tax credit, job creation credits and more. And states don’t always need to disclose the names of the companies receiving the deals.

The AP estimated in 2015 that nationwide $1.5 billion in subsidies have been awarded to the data center industry over the past decade. The GoodJobsFirst.org report details just 11 megadeals of $50 million or more. These alone involved $2 billion in subsidy.

Two billion in subsidy, remember, to some of the biggest companies in the world. In 2007, Google pitted North and South Carolina against one another in a competition to offer the greatest tax breaks, making them believe only one project was planned. In reality, there were two, one in each state.

The company aggressively demanded tax breaks, telling North Carolina officials at one point that the project would not locate there if sales tax was assessed. North Carolina gave in, granting Google a 100 percent personal property tax exemption, an 80 percent real estate tax abatement and a complete sales tax exemption on electricity and equipment in a deal that was to last 30 years. The company promised to create 210 jobs in return for the estimated $254 in subsidies — over $1.2 million per job.

GoodJobsFirst.org wants local governments to call tech companies’ bluff. The report recommends total transparency around these deals so the public can weigh the value of tax breaks, capping combined state and local subsidies at $50,000 per permanent job, and just saying no when deals are tipped vastly in favor of the tech giants.

“Companies like Google, Microsoft, Apple and Facebook generate billions of dollars in profits and have enormous cash hoards,” the report states. “They have everything they need to run their businesses: access to capital and markets, strong customer bases and some of the smartest people on earth who create new technologies for future corporate growth. So why should communities use their limited financial resources to subsidize such self-sufficient companies to build something the companies must have?”