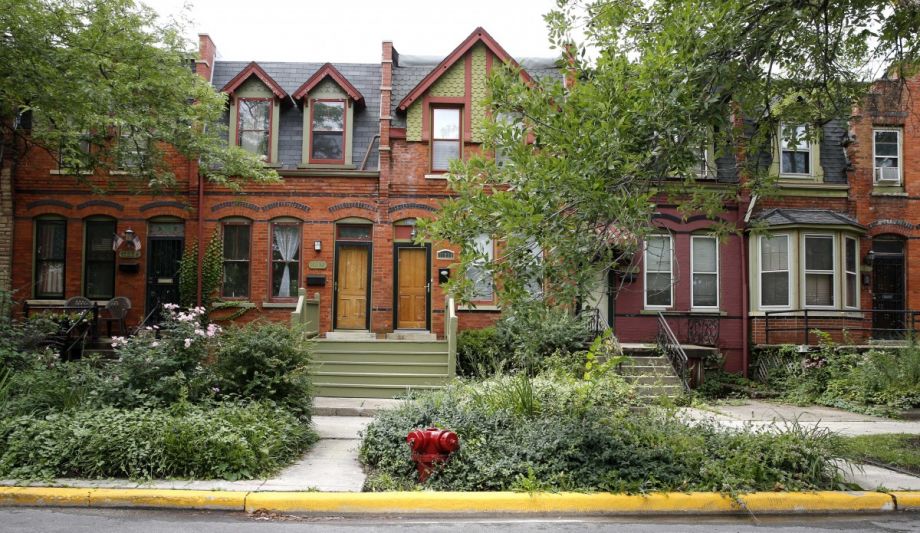 This Aug. 22, 2014 file photo shows some of the Pullman neighborhood’s ornate brick homes that were built in the 1800s by industrialist George Pullman as a blue-collar utopia to house workers from his sleeping-railcar factory in Chicago. (AP Photo/Charles Rex Arbogast, File)

As one researcher recently found, majority black neighborhoods are undervalued by $156 billion across the country simply because they are majority black.

Encouraging investment in black neighborhoods without displacing anyone and building wealth for the black households in those neighborhoods are multi-generational challenges for policymakers at every level of government.

So even after ten years and $340 million invested and counting, it’s still early days for the Pullman neighborhood on the Far South Side of Chicago. But it’s possible to report that in this neighborhood employment is up, crime is down, and home values are rising, even as Pullman has remained more than 82 percent black through the past decade.

How in the world has all that been possible? And with a new mayor taking office who has made promises to provide similar investment with benefits to the rest of the systematically disinvested South and West Sides of Chicago, what could other neighborhoods — or other cities, for that matter — learn from has happened here in Pullman?

Let’s start with the local alderman. Pullman is part of Chicago’s 9th Ward, so has been represented in city council by Alderman Anthony Beale for 20 years, who in February won a sixth term in office. Twenty years is a long time to go in Chicago without getting embroiled in a corruption scandal (though Chicago aldermen are known to survive such scandals with alarming frequency). Some 31 Chicago aldermen have been convicted of taking bribes or other corruption charges since 1972. Meanwhile, Beale is the one Chicago alderman who made headlines once for refusing to take a bribe.

Beale was born and raised in the 9th Ward. He still remembers the neighborhood in what had been much better days before deindustrialization and disinvestment. He played Little League baseball here growing up, but by 1999, when he was first elected at age 29, the ballfields he’d played on as a kid had fallen into disrepair. Restoring them was one of the first projects he shepherded after coming into office. Now he coaches baseball at a high school in the ward, alongside his son.

There are other wards whose aldermen have local roots, but to keep them around for 20 years and counting without getting embroiled in bribery, extortion or some other corruption scandal is a challenge in Chicago. And in other cities, 20 years of leadership would be impossible because of term limits. But here, the local roots and stable leadership at the ward level are crucial to another element of Pullman’s success: having a plan for community development and sticking to the plan over the course of what will soon be three mayors.

“If you change alderman every four years, every eight years, you don’t have a chance to see that person’s vision come true,” Beale says. “Hypothetically speaking, if I had not been here as long as I’ve been here, do you think all these things would be happening? Maybe, maybe not. Somebody else may have had another vision.”

Beale hasn’t done it all alone. As Next City has previously covered, Beale worked closely with Pullman-based nonprofit Chicago Neighborhood Initiatives to come up with the neighborhood development plan through a series of over seventy community meetings from 2009-2010, right as the nonprofit was established.

“Hopefully the new mayor has the same vision as far as my community goes,” Beale says. “But that’s my job, my job is to convince whoever the mayor is, that we’re going to continue to ride this train and this thing is going to keep moving no matter what.”

Helping to fuel that train has been tax-increment financing, or TIF. These are mechanisms found in cities across the country where a portion of property taxes in a geographic area get set aside to fund development or infrastructure projects within that area.

Cities and developers like TIF because it allows projects to, in theory, “pay for themselves,” by borrowing investor dollars up front and repaying investors with the higher property tax revenues collected from the TIF area later. Critics charge that TIF takes sorely needed revenues away from basic municipal services. Many also criticize TIFs for a lack of transparency in how TIF dollars get allocated.

The potential pros and cons of TIF are especially heightened in Chicago, which has as many TIF districts (around 150 of them) as the next nine largest U.S. cities combined, according to a 2018 study by the Lincoln Institute of Land Policy. Nearly a third of annual property tax revenues in Chicago are diverted into TIF district coffers instead of the city’s general funds, according to Illinois Policy.

And in just one example of a much larger, long-running pattern that extends back into the previous administration, a 2017 investigation by the Better Government Association uncovered evidence showing how officials working for Mayor Rahm Emanuel had used a daisy chain of entities to funnel TIF dollars from disinvested neighborhoods on the South Side of Chicago into renovating and upgrading downtown Chicago’s Navy Pier.

Chicago’s TIF districts became a major issue in the recent mayoral election, with some candidates saying they’d revamp the system, bringing more transparency and accountability, others calling to abolish the system entirely. Mayor-elect Lori Lightfoot said she’d “not create new TIF districts until we have fully analyzed the performance of existing districts to ensure that they are meeting their intended objectives and that private recipients of TIF funds are satisfying their contractual obligations.”

Since getting the designation for the North Pullman TIF district, Chicago Neighborhood Initiatives has used around $31 million in TIF dollars to help develop the second phase of a shopping center, a sustainable home goods factory and bottling plant, a regional distribution center for Whole Foods, and an indoor commercial agriculture greenhouse — all built on what had been vacant land at the site of the former Pullman Palace Car Company construction and design facility. Chicago Neighborhood Initiatives has also helped bring in another $300-million-plus in investment to the site, which has created 1,580 permanent jobs thus far.

“I have a blighted community, we took a blighted piece of land, and we have turned it into a thriving business district,” Beale says. “That’s what TIF is designed to do. If it had not been for TIF, there would be no development, no jobs. There would still be a food desert in my community if there’s no TIF. There’s no shopping in my community if I don’t have TIF.”

In a recent study by the Metropolitan Planning Council, commissioned by Chicago Neighborhood Initiatives, from 2006 to 2015 the Pullman neighborhood adjacent to the site experienced a nearly 15 percent increase in job growth, while peer neighborhoods all experienced declines. The researchers also observed a consistent yearly growth from 2012-2015 in the percentage of jobs held by residents of the ZIP code around the Pullman Palace Car Company land.

The same researchers also found that crime went down, most sharply in the area directly around the Pullman Palace Car Company redevelopment site.

And, from 2016 to 2017, the Metropolitan Planning Council researchers note that Pullman recorded the second largest level of home appreciation (136.2 percent) of any of Chicago’s 77 official community areas.

“It was notable,” says Shehara Waas, research associate at the Metropolitan Planning Council. “People were really excited about that because that’s not what had been going on over this long period of deindustrialization followed by disinvestment. It was staggering.”

In Pullman, the Metropolitan Planning Council did not find that residents were concerned that the $340 million of investment in Pullman would lead to displacement. That may be in part because nearly all those dollars have gone into developing what had been a vacant piece of land, as opposed to bulldozing neighborhoods to make way for new development.

It could also have much to do with the fact that Pullman was losing population for decades prior, thanks to years of disinvestment and deindustrialization. From 2000-2016, the Pullman area lost more than 25 percent of its population as families looked for better economic prospects elsewhere in the region or across the country.

If any projects or investment that threaten displacement were to appear on the horizon for the 9th Ward, Beale has a lot of power to stop it. Chicago is one of these cities where, when voting to approve funding or zoning changes related to specific developments, the entire city council defers to the member representing the district where the project is located. The practice gives local council members a de facto “fiefdom” over their districts. In Chicago it’s called “aldermanic prerogative.”

And yet, the Metropolitan Planning Council has also spoken out against aldermanic prerogative as a key factor powering corruption and maintaining Chicago’s racial segregation because aldermen in wealthier, whiter neighborhoods can easily stop affordable housing projects from being built.

The think tank has proposed some tweaks to aldermanic prerogative that would make it harder for aldermen to stop affordable housing from being built in wealthier, whiter wards, while potentially preserving some of the veto power that aldermen in less wealthy, predominantly minority wards might want to retain.

Whether or not aldermanic prerogative remains the avenue by which the community’s voice gets taken seriously as part of development decisions, Waas believes it’s the Pullman community’s voice and presence being taken seriously that has been key to success so far. It’s not simply been about how to shape this project or that project, it’s gone deeper than that. In Pullman at least, there’s the sense that Beale, Chicago Neighborhood Initiatives and others are only doing things that residents asked them to do upfront, a decade ago.

“They show up to community meetings, they show up when there’s an announcement of a new initiative, they’re very intent on making their voices heard, and it’s very important to them that they believe that any sort of development is community-driven, that entities aren’t just coming in and doing things in a vacuum,” Waas says. “So I think for that reason residents themselves are championing the community story as a point of pride and a resurgence shown by multiple quality of life metrics.”