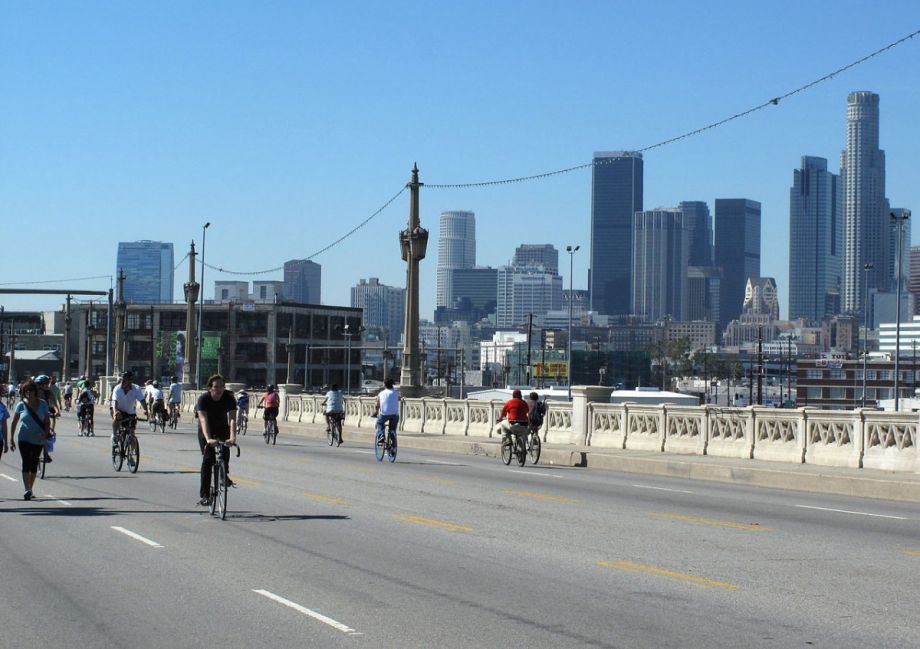 CicLAvia participants cross the Fourth Street Bridge, with a view of downtown Los Angeles in the background. (Photo by Downtowngal)

Over the last 30 to 40 years, a tectonic shift has occurred in the way Americans think about urban transportation networks, especially the streets and roads that are their backbone. After decades of designing streets as low-grade highways designed to move cars as quickly as practicable, officials in a growing list of cities across the U.S. have changed course and implemented policies and design standards that emphasize the movement of people, not just cars. Bike lanes, pedestrian plazas, ciclovias and more have proven popular where implemented, delivered significant public benefits, and generated momentum for further changes that reclaim city streets for everyone’s use.

These officials couldn’t have done what they did without support from above — the citizens to whom they report and who advocate for change — and below — the city transportation officials charged with developing the policies and strategies for their implementation and the public works bureaucracies whose job it is to do the implementing.

A report released this week by TransitCenter, a research and advocacy organization devoted to promoting urban vitality through better transit and transportation options, documents the role all three groups play in producing innovative urban mobility systems.

“A People’s History of Recent Urban Transportation Innovations” looks at how the virtuous cycle of innovation works by examining the role all of the actors played in six cities: Charlotte, Chicago, Denver, New York, Pittsburgh and Portland.

The process begins with civic organizations that advocate for change and mobilize public support for policies. While planning groups like New York’s Regional Plan Association and business leadership groups like Charlotte’s Center City Partners can serve as “think tanks” that generate new ideas and turn them into plans that can be acted upon, the grassroots advocacy groups are fundamental. According to the report, groups like the Active Transportation Alliance in Chicago and the Bicycle Transportation Alliance of Oregon play the key role of raising public awareness of the issues and generating support for change. When groups with particular interests band together around larger goals, they become even more effective.

These groups create the space for city halls to rethink how their cities approach transportation and promote new policy directions. By offering candidates energized blocs of voters, the advocates give politicians an opportunity to incorporate innovative thinking on urban mobility into their larger policy agendas. Once in office, mayors or city councilors can then claim a mandate to develop programs based on the ideas of the advocates.

Here mayoral appointments to leadership positions play a crucial role. Putting top transportation officials in place who understand the goals of the plans and programs means that those goals get translated into workable policies.

And that’s where the bureaucrats below the commissioners come in. Whether they’re staffers who have come from the advocacy community or career civil servants, they share a knowledge and commitment. An advocate may bring an understanding of community politics to the task in order to help projects overcome objections, or they may know the ins and outs of bureaucratic procedure and thus can develop effective rules that others will follow after they’re gone. In this last realm, the development of new street design standards in places like New York form not only the basis for lasting change at the local level but also a platform that other cities can adopt.

All three of these elements, the report concludes, are essential to producing durable reform. The report notes how the lack of all three elements kept Pittsburgh from fully realizing the reform goals of Mayor Tom Murphy or taking maximum advantage of a Pennsylvania Department of Transportation grant program that encouraged regional cooperation on land use and transportation planning.

However, even cities like Pittsburgh have benefited and will continue to benefit from the new approaches to urban transportation put in place elsewhere. Organizations like the National Association of City Transportation Officials are producing manuals and design standards that upend the autos-above-all-else approaches that continue to dominate thinking at both the state and federal levels.

In another 30 years or so, city residents may come to take for granted the pedestrian- and bike-friendly practices and designs now taking hold in today’s cities. If so, they will have this triad of activists, elected leaders and bureaucrats to thank.