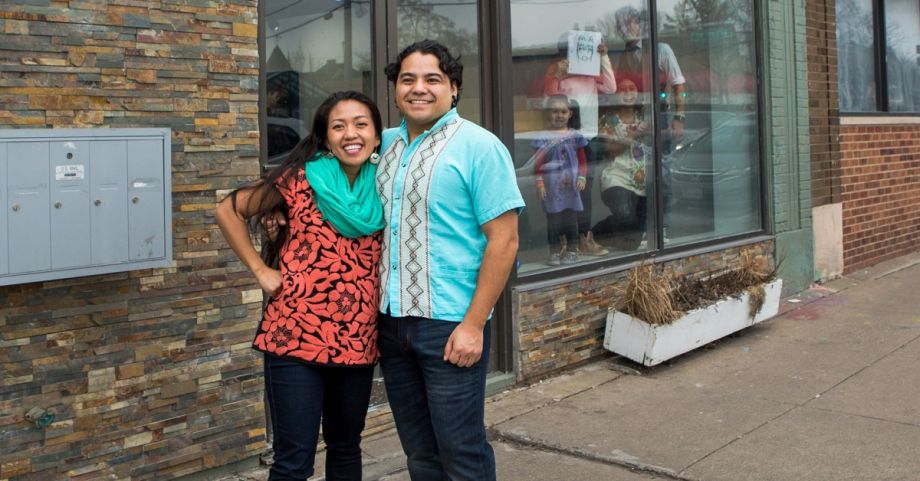 Mary Anne Quiroz needed half a million dollars, and fast, or the cultural arts center she and her husband had recently moved into its first permanent space might have been lost to a higher-paying tenant after their landlord put the building up for sale.

“I went to different state and city officials,” says Quiroz. “A lot of folks didn’t know how or have the resources. I just kept telling our story.”

The Dayton’s Bluff neighborhood, on the east side of St. Paul, is a hub for immigrant and indigenous communities. So it was very intentional for Indigenous Roots, the nonprofit arts organization Quiroz co-founded and runs with her husband, Sergio Cenoch, to locate its cultural arts center there.

Under normal conditions, on any given night the Indigenous Roots Cultural Arts Center could be rented out for a Hmong ethnic dance class, a Taino Afro Boricua arts and philosophy class, a hip-hop dance class, or a performance by a group like Kalpulli Yaocenoxtli — a Mexica Nahua community dance group and drum circle that Cenoch founded. The cultural arts center opened in May 2017. It was less than a year later the landlord decided to sell the property, whose other tenants include a quinceañera store and a travel services provider.

As a grassroots arts organization, Indigenous Roots has never had deep pockets. The landlord put the building on the market for $500,000. A local property management and real estate investment group stopped by one day to inform Quiroz of their intentions to acquire the property in an all-cash deal along with several other properties in the neighborhood.

Somehow, word had gotten around to Land Bank Twin Cities. With its significantly larger balance sheet, the land bank obtained a conventional loan from a local bank and acquired the building at the landlord’s asking price — outbidding any all-cash offers. Simultaneously, the land bank entered into a purchase agreement with Indigenous Roots, giving the nonprofit up to three years to come up with $500,000 to acquire the building from the land bank.

Given current low interest rates, Quiroz is already preparing to complete the acquisition later this year, combining donations with retained earnings from renting the space and a smaller loan. And with a looming commercial real estate market crash, she hopes other community-based organizations will soon have a chance to follow in their footsteps.

“We would not have qualified for a traditional loan for half a million dollars to buy this building, so it was a really important step for us to trust the process,” says Quiroz. “This is much more than buying a building, this is anchoring ourselves in the community and if there are others who want to own their commercial property, basically we’re the guinea pig, we’re gaining the experience and are now able to share it.”

Between shutdowns, re-openings and re-shutting down shutdowns around coronavirus, coupled with the unrest surrounding the killing of George Floyd, Breonna Taylor and others at hands of police officers, it remains unclear what the full extent of the damage will be for commercial real estate markets across the country.

According to data compiled by the National Association of Real Estate Investment Trusts, retail rents have been hit the hardest by far. Retail is second only to hotels in commercial real estate loan defaults forecasted, according to Trepp, a commercial real estate data monitoring service for investors. In Mid-May, ProPublica reported on a whistleblower who had come forth with evidence that the commercial mortgage-backed securities market had become plagued with inflated revenue claims, analogous to the inflated residential values that helped spark the last financial crisis and the Great Recession.

At least some investors are already lining up to pounce. The Real Deal reported that coronavirus distress is the “opportunity of the century” for real estate investors, with one data source showing private real estate funds standing by with $142 billion in cash ready to snap up distressed properties.

It’s happened before, and not that long ago. In the aftermath of the 2008-2009 financial crisis, many neighborhoods across the country suddenly had a glut of foreclosed homes that largely ended up vacant and distressed. Many landed in the hands of private equity funds, which acquired hundreds, even thousands of distressed single-family homes at a time and converted them into market-rate rentals, often pricing out the homes’ original owners in the process.

Land banks worked with federal programs and private partnerships like the National Community Stabilization Trust to acquire some of those vacant and distressed properties at a discount, making it easier to get them into the hands of first-time homeowners. Established in 2009, Land Bank Twin Cities was part of those efforts, and has moved more than a thousand vacant and distressed homes back into the hands of homeowners so far.

But the Twin Cities housing market recovered relatively quickly compared to other parts of the country, says Sandra Oakes, executive director of Land Bank Twin Cities. So early on in its life, the land bank needed to make a decision about whether its mission was achieved and it was time to fold or if there was more it could do as a land bank to continue strengthening communities that were still reeling from the broader effects of the Great Recession.

After some soul searching and strategic planning, Land Bank Twin Cities decided it was time to go bigger — to look at acquiring larger sites, or in some cases assembling adjacent sites, and partnering with friendly developers to build or preserve affordable housing and commercial commercial spaces.

“You could have a greater impact in terms of housing units,” Oakes says. “And as part of that planning we always thought commercial real estate would be an opportunity, but it’s harder to figure out financing for it.”

By no means is it easy to finance rental housing for low- and moderate-income households, but there are tools and subsidies available, and the land bank was designed in large part to make up for the specific shortcomings of those tools.

For example, Federal Low-Income Housing Tax Credits are one of the most common layers in the affordable housing development capital stack, but they are usually only awarded once a year, administered at the state level. It’s typical for projects to apply two or three times before receiving any credits. The land bank can and frequently does acquire sites on behalf of a developer and hold them for up to three years while the developer is applying for tax credits and assembling other financing.

For residential properties, Land Bank Twin Cities uses a community bank line of credit to help fund acquisitions, and there are more state and local subsidies for acquisition and construction or rehab of housing. There’s also Section 8 and other federal rental subsidies for housing that have no equivalent on the commercial side for small businesses or community-based organizations.

For commercial properties, there are tools like Federal New Markets Tax Credits, but those can also be an arduous matchmaking game that can take time and cost a lot in consulting fees. Indigenous Roots didn’t have time or deep pockets to work through that.

But, with a constant flow of deals in its pipeline, Land Bank Twin Cities has properties worth around $18 million in its portfolio. It’s all properties held for future sale, some of it already earmarked to specific affordable housing developers, some available for purchase. It’s not cash, but it is a balance sheet, and the land bank can take a balance sheet into a bank, like a conventional private developer, and use it to gain access to additional financing. That’s how the land bank got a $375,000 commercial real estate loan, which it combined with $125,000 in cash, to acquire the Indigenous Roots Cultural Arts Center’s building at the previous owner’s asking price.

As part of the purchase agreement, Indigenous Roots essentially acts as the property owner, collecting rent from the property’s other tenants and handling maintenance issues. Land Bank Twin Cities is there to provide templates for leasing and maintenance provider contracts and other advice as needed.

Land Bank Twin Cities says it has done $40 million in commercial real estate deals so far using its balance sheet to access conventional bank loans. Some of that $40 million includes deals to build or preserve apartment buildings as affordable housing, but it also includes deals to acquire properties for resale to community and cultural organizations who were previously renting their spaces. Landenberger estimates that community and cultural spaces are now about 20 percent of the land bank’s activity.

Oakes would like Land Bank Twin Cities to do more commercial real estate, especially now, knowing that profit-hungry investors are standing ready to take advantage of the chaos coming out of the pandemic and the uprisings. The next few months will be critical, as the recovery does or doesn’t take shape and as property insurance claims play out after the unrest.

But there’s still only so much in bank loans the land bank can take out, based on how big its balance sheet is at any given moment. Oakes says, “Historically, it hasn’t been easy to raise non-bank capital, but we are using a capacity campaign to raise capital from other sources, mostly foundations, to grow the pot of money the land bank can use to acquire commercial properties with or without additional debt.”

“I’d say a lot of funders like to fund the end product, they want to stand with the shovel at the end,” Oakes says. “I spend a lot of time working to convince funders that but for us, that land where there’s a new development you just funded would not exist, it would have been too expensive for the developer. If you can get in front of funders with a story, it helps, but sometimes it feels like I’m beating my head against the wall.”