Toward a More Resourceful City – Next City

Toward a More Resourceful City 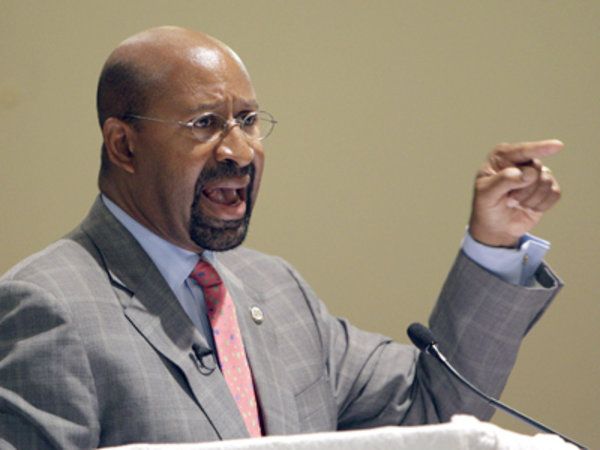 Philadelphia Mayor Michael Nutter, whom protesters heckled off stage as he tried to deliver his 2013 budget address last week.

Last week, Philadelphia Mayor Michael Nutter delivered his budget for the 2013 fiscal year in the form of a prepared speech. But the speech wasn’t given to City Council and the public, as usual; it was delivered to a press corps. And the story they took away wasn’t the minutiae of how the city plans to spend $4 billion, but that protestors who took issue with school closings and union negotiations, among other concerns, heckled Nutter off the stage.

The budget debacle was heavily covered in local press and live tweeted, but didn’t make national headlines. If you looked at the New York Times or CNN last week, you would have thought that the only city struggling to figure out its municipal budget was Detroit.

Detroit, in case you haven’t heard, is so deep in debt ($14 billion and counting) that Michigan has installed an emergency manager to oversee the city’s finances. But it’s not alone in Michigan — five other cities are under emergency financial managers — or the country, for that matter, where Detroit is merely the largest city facing bankruptcy. Plenty of others, from Central Falls, R.I. to Stockton, Calif., have already gone belly up.

While Detroit’s decline has been thoroughly chronicled, many people would assume the city has run out of money, since it’s lost more than half its population and a third of the remaining population lives in poverty. But its financial mess is in great part due to the city’s ballooning entitlement costs. Indeed, half of Detroit’s annual budget is just spent paying for pensions and health care for employees and retirees.

If you read a lot of urbanism blogs, you would think cities’ futures depend on placemaking, efforts at combatting climate change and sprawl, growing new employment sectors and defending cities from gentrification. But make no mistake: The greatest threat to cities comes from none of these. It’s the very unsexy threats of escalating pension and entitlement costs, matched only by the danger of a cowardly and unimaginative public sector.

While Philadelphia’s public sector has shed corruption and has even been recently recognized for its innovative ideas, it’s on an unsustainable path. As the Pew State of City report shows, every single budget category has been slashed over the past decade — except employee costs.

The city is trying to deal with this challenge in two simple, but ultimately unsustainable, ways. Philly, like most other cities, is cutting services and raising taxes, finding ways to save money and bring in new revenue. This sounds totally reasonable, until you take some Kantian long-term logic to it and ask: What if you continue these methods for decades into the future? If you continue to cut services to rein in costs and charge your customers more for those reduced services, you will go out of business.

You may ask: What if you bring in more revenue and cut costs in a smart fashion that ultimately allows the city to do more with less, while also freeing up more money for strategic expenses? Indeed, Philadelphia has tried this for the past decade. It has cut hundreds of municipal jobs while raising taxes by about 20 percent over the past decade. But that has barely caught up with pension and entitlement costs. The cycle just won’t end this way.

Look at any city budget and you’ll see a series of pie charts that explain the inputs and outputs for local government. Delivered in black and white, siloed by sector, barely making mention of projections into the future, city budgets are the genesis of the “no-can-do” mentality that emanates from City Hall. Why can’t the city experiment with new transportation options or homeless shelters? There’s no budget line for that. How does the city partner with local nonprofits or for-profit corporations in a way that meaningfully contributes back to city services but doesn’t cost taxpayers money? You can’t figure that out from the budgets.

As cities grapple with this new future of limited resources and increasing demands, the black-and-white-input-output-pie-chart-tax-and-cut-services approach to a city’s resources just won’t cut it. A new, more dynamic model of how make use of all of a city’s natural and monetary resources is needed.

You might believe that bankruptcy and emergency financial managers can, in a tough-love kind of way, end up benefitting a city. When a city hits rock bottom, it can experiment and more fully engage the private sector. In Detroit, for example, both private investors and the federal government are funding a new light rail line. One assumes that the city will also be released from some of its crushing debt. It’s hard to imagine Detroit will be worse off after the bankruptcy than it was before it.

And indeed, other cities have seen the benefits of filing for bankruptcy. Vallejo, Calif. was just one of five Golden State cities to file for bankruptcy last year.

Assistant City Manager Craig Whittom, who has worked in Vallejo since 2003, said the bankruptcy may have been the best thing to happen: “It was effective at helping us re-create ourselves and change the culture so that we could restart from a stronger financial footing.

The Post called the city a model of austerity, pointing to its use of Facebook and Twitter to source complaints for the police and a participatory budgeting process that will help raise nearly $10 million.

But as a Los Angeles Times article from August 2012 notes:

[Vallejo’s] Police Department is about a third smaller than at its peak. The Fire Department has been slashed by nearly a quarter, and the median home price has dropped almost 70%. Half of the downtown storefronts are vacant.

These are the bread-and-butter statistics that make cities livable and desirable. If residents can’t have faith in safety, business and investing in property, the city may survive — but it certainly won’t thrive.

Additionally, the repercussions of a bankruptcy are still unknown. While many people have written about the stigma of bankruptcy, it’s hard to believe that will really matter in the long term. After all, New York City was once on the brink of bankruptcy. Does anyone care these days?

But as a Governing.com reported in January:

Unlike corporate bankruptcies, there’s so little precedent for cities filing for bankruptcy protection that case law is being written with each major decision. The big difference is, of course, that cities cannot liquidate like a business can. But beyond that divide there are more nuanced scenarios where that distinguishing characteristic is playing out.

In Chapter 11, for example, judges can use their vast authority to move a case along — in Chapter 9, they have few overarching powers. Creditors in Chapter 11 are well versed in their options but the options in municipal bankruptcy are limited and still being tested.

In other words, it’s still a crapshoot.

Lastly, to praise the benefits of a bankruptcy is to ignore all the opportunity costs of years in decline. Before a city gets to bankruptcy, it has to squander the time and money of its residents for a long period of time. It’s wonderful to imagine how Detroit will rebound now that it’s been freed of some of its problems; it’s awful to think about how the city’s poor management has compromised the opportunities for its people over the past several decades.

After a century or more of wealth and growth, Americans are now getting used to the fact that each generation is not going to be more successful than the last. Figuring out how we will cope with high expectations and limited means, in the face of hardships ranging from climate change to inequality, will be critical to the endurance of all our communal institutions.

The term “resourceful” means having the ability to overcome difficulties by being clever. It goes without saying that cities need to be resourceful. But of course the word includes “resource,” and it behooves cities to expand their definition to include cleverly rethinking their natural and financial resources, finding ways to multiply and stretch them.

Cities might think they’re being resourceful by cutting services and raising taxes. But it’s hard to imagine that this approach will produce the best government.

A limited public sector has certain benefits. For example, if a city government can’t provide bike share and the private sector steps in, that seems to work. The private sector will happily provide equipment in exchange for a variety of benefits, such as branding or advertising space. The public gets cheap bikes. Everyone wins.

And one can imagine a future in which government and the private sector partner to a greater degree, particularly around infrastructure. Whether investing in public works projects that create a good return for the private sector, or simply handing over underperforming and expensive public sites such as highways that need to be maintained, the private sector’s role is primed to grow in the built environment over the decades. (Next City has reported on how community development corporations that are largely funded by philanthropy can accomplish social goals with private capital.)

And lastly, we’ve seen how the public sector is eager to reduce its exposure. Bloomberg’s anti-smoking, anti-soft drink, anti-plastic containers campaigns are all about reducing the costs that the city pays for sick and unhealthy people, and for non-biodegradable trash.

But a weak public sector has its problems, particularly if we care about equity concerns rather than just pay lip service to it. Continuing to look at Detroit: Data show that nearly half of Michigan’s population that lives in cities under emergency financial managers are African American; meanwhile African Americans make up just 14 percent of the state’s population. In other words, African Americans are disproportionately likely to live in cities without elected officials. Even those in charge of Harrisburg, Pa.’s financial mess have noted that racial inequity leads to bankruptcy, creating a vicious cycle.

Lastly, much has been made about the efficiencies of the private sector. But we’ve yet to see how efficient the private sector without a functioning public sector looks like. Most private-sector activities in cities function with some kind of government subsidy. Look at the $300 million in city and state money spent on Atlantic Yards in Brooklyn, or the billions of dollars spent on incentives to lure businesses across city, county or state lines. Without public dollars that support businesses, how much better does the private sector do?

Besides, wishing for a mostly privatized city isn’t helpful when most cities are well-endowed entities that — like, say, marriage or democracy — aren’t perfect institutions, but the best we’ve come up with thus far. The brand of government still has value. Why completely undermine it?

If we agree that local government is important, but that its current model is unsustainable, how should it be modified?

Stay tuned as we continue this conversation throughout 2013.