Beneath the Shouting Match, a Look at Philly’s First Post-Recession Budget – Next City

Beneath the Shouting Match, a Look at Philly’s First Post-Recession Budget 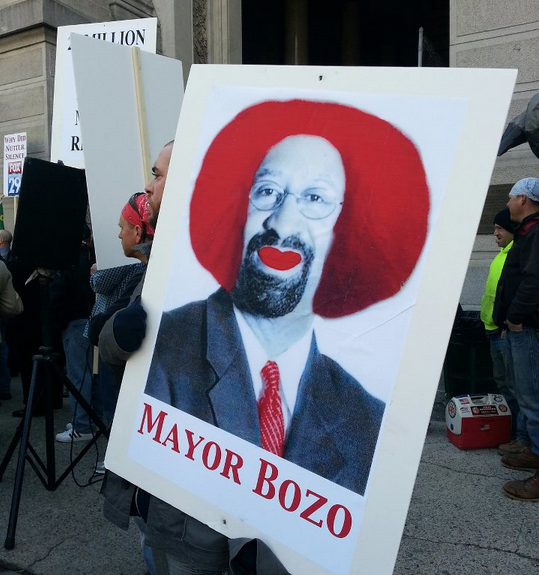 The scene in Philadelphia’s City Hall on Thursday was one of the more dramatic, and absurd, in decades. Which is really saying something, considering the colorful history of that building and its occupants.

Angry municipal union members — each equipped with a whistle — made such a tremendous racket that nobody in the City Council chambers could hear Mayor Michael Nutter try to deliver his annual budget address.

Which is too bad. Because, like all municipal budgets, the one Nutter proposed yesterday has significant implications for the city. Indeed, this is Philadelphia’s first true post-recession budget, a package of proposals that includes neither tax increases nor major service cuts.

“This is a budget that’s seeking to turn the page,” Nutter said, responding to questions delivering his budget address for a second time, in a quiet room filled only with the press and members of his staff. “We’re making some investments for a change.”

On the balance sheet, the investments total $99 million, a 2.7 percent increase over last year’s spending, well above the rate of inflation. That sounds like good news for a city that, like most others, has been badly buffeted by the economic winds of recent years.

But most of the new spending is allocated for costs that do not improve existing city services in any way: Half, or $49 million, is allocated for higher pension payments, another $18 million will cover wage increases for police officers, and $14 million is being set aside for new union contracts (which is nowhere near enough to satisfy the workers who commandeered City Council chambers yesterday).

This is the new reality for Philadelphia and many other U.S. cities. In those years when a city is fortunate enough to escape tax hikes or deep spending cuts, the nominal gains in the budget are almost entirely consumed by fixed costs like pension payments. Subtract all of that, and Nutter is calling for truly new operational investments of just $18.2 million, an amount equal to half of 1 percent of last year’s budget. And even that much is subject to City Council approval, not remotely a sure bet given the council’s interest in both keeping the property tax rate as low as possible under the new Actual Value Initiative and getting new contracts for city workers.

The $18.2 million Nutter is requesting from the council includes some modest additional funding for the Department of Revenue to improve collection of delinquent taxes, an additional $780,000 to beef up code enforcement inspections, $1 million for the Community College of Philadelphia and $1 million for the library system.

On top of those limited investments are a number of proposed capital projects of real interest to urbanists.

The first is a $3 million request to begin a bike share program, enough to fund the purchase of 650 bikes and some number of stations. If Nutter has his way, the bikes will be on the street by early 2014, and available in Center City between South Street and Temple University, and in West Philadelphia to about 41st Street.

There is also funding allocated — though just how much isn’t yet clear — for further enhancements to the Benjamin Franklin Parkway and for the Bartram’s Mile project, which would extend the Schuylkill Banks Trail west, to the opposite bank, connecting Bartram’s Garden to the popular riverfront path.

Another major capital project included in the plan is the relocation of the city’s police department out of the Roundhouse, a threatened Brutalist building at the eastern edge of Chinatown, and into the imposing old Provident Mutual building at 46th and Market streets in West Philadelphia. The city would also locate a health clinic and the city morgue there, combining three facilities into one and selling off three prime parcels of real estate to help pay for the move. A bond issue will cover whatever expenses the property sales do not.

But none of this received any oxygen in City Hall yesterday. Rather, it was the rapidly escalating dispute between Nutter and the city’s municipal unions (two of which have been working without a contract for four years) that dominated the day, shoving even the hugely controversial Actual Value Initiative to the side.

The tactics employed by the unions — occupation and the drowning out of formal discourse — were not new, but it was unusual to see them used against a Democratic mayor like Nutter (instead of, say, a Republican like Gov. Scott Walker of Wisconsin).

Last year, the municipal unions disrupted Nutter’s budget address, but stopped short of derailing it. This year, they stopped Nutter and seem intent on derailing everything unless, and until, they get a contract. The prevailing sense among workers is that they sacrificed along with everyone else during the recession by enduring years of stagnant wages. Their patience is gone, and City Council (if not the mayor) appears anxious to soothe their concerns.

Which means, really, that the whole budget is up for grabs: AVI, bike sharing, tax hikes and more.