On the Waterfront, A Bankrupt City – Next City

On the Waterfront, A Bankrupt City 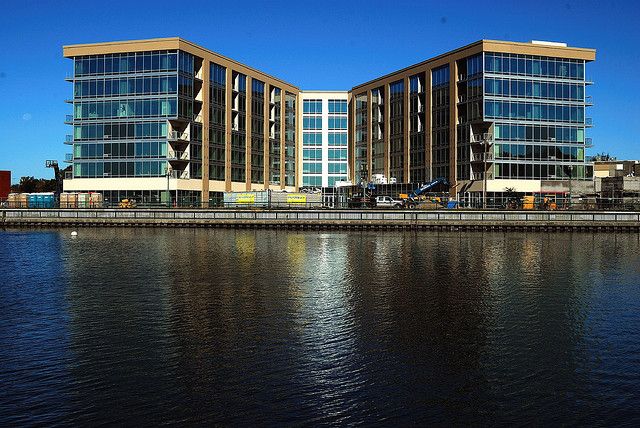 The city of Stockton invested heavily in subsidizing waterfront development. This week, it approaches bankruptcy. Credit: CalWest on Flickr

After a tense 90 days of deliberations and years before of slow economic decline, the city of Stockton, Calif., on Tuesday night took a final vote in favor of bankruptcy. City officials could file as early as today. The much-anticipated Chapter 9 filing would make the Central California port the largest city in the country to go bankrupt.

City officials pledge that residents will experience no “measurable service reductions” as a result of the bankruptcy, and that city employees will continue to draw a paycheck. Instead, the city’s $26 million budget shortfall will be managed through a restructuring of funds, the suspension of bond payments, claims and other long-term debt, and cuts to the employee salary and benefits agreements — including reduction and ultimately elimination of city contributions to retiree medical insurance, said Connie Cochran, Stockton public information officer, in a news release Tuesday.

Under bankruptcy protection, city officials would retain power over day-to-day city operations while a judge would take over all decisions concerning the city’s debts.

“Like corporations, such as American Airlines and General Motors, that have or are going through bankruptcy, we will continue to operate and provide services,” said city manager Bob Deis. “We will use this opportunity to restructure and come out of bankruptcy with a stronger, healthier and sustainable future.”

How that sustainable future will be paid for is still a big unknown.

A historic deepwater port city with strategic access to the Pacific Ocean and the San Francisco Bay, Stockton prospered throughout the 20th century as a hub for trade and naval operations. As with many other similarly situated cities, the economy began to unravel with the end of the Cold War.

In 1996, the federal government announced it would close a naval base that had operated since prior to the Second World War. That same year the state closed a large public hospital. (The imposing 19th-century complex has since been renovated into a small satellite campus for California State University Stanislaus, which, according to news reports, state budgets have treated no more kindly.)

Stockton has known that it’s been in trouble for a while. Throughout the 1990s, the working-class city 80 miles east of San Francisco invested heavily in remaking itself. Like Baltimore, San Diego and numerous post-industrial waterfront cities before it, Stockton got itself a family-friendly downtown, including a heavily subsidized waterfront development and hotel, new sports stadiums and a suburban-style megaplex with an IMAX theater and shops.

The hope was salvation would come in the form of Bay Area commuters eager for an affordable bedroom community with nice places to take the kiddies on the weekend. It tried to beat the suburbs at its own game. By 2010, a flood of foreclosures had crushed all optimism; that year, foreclosure filings affected 6.9 percent of homes, the seventh-highest rate in the nation, according to online foreclosure marketplace RealtyTrac. Earlier this year, the city defaulted on several debt payments and lost to banks three city-owned parking garages as well as the downtown building it had planned to convert into a new city hall.

The new downtown hasn’t been the economic driver that Stockton hoped. Photo credit: CalWest on Flickr

In February, California Gov. Jerry Brown eliminated state support for the redevelopment agency that helped Stockton pay for the revitalization of its waterfront. That means the port city can’t easily make the kind of investments, or rack up the kind of debt, that it did in the 1990s; there is no clear mechanism for public investment into private development. For now, that’s a good thing. Stockton needs to get back on its feet and another big-ticket groundbreaking isn’t going to do the trick.

Hundreds of residents came out Tuesday night to watch the City Council deliberate the bankruptcy plan. Nearly everyone who spoke at the hearing “began with some version of: ‘I was born and raised here,’” reported the Los Angeles Times.

People raised concerns about public safety, pensions and schools. They worried if their families would be forced to leave the community they ‘d been part of for generations. No one asked for a new stadium or a subsidized hotel. Unlike in the 1990s, the city now has few options on how to remake itself: The restructured Stockton will be frugal one. Here’s to hoping that the concerns of the people who came out on Tuesday figure into the plan.