The Facts Behind the New York City Facts – Next City

The Facts Behind the New York City Facts 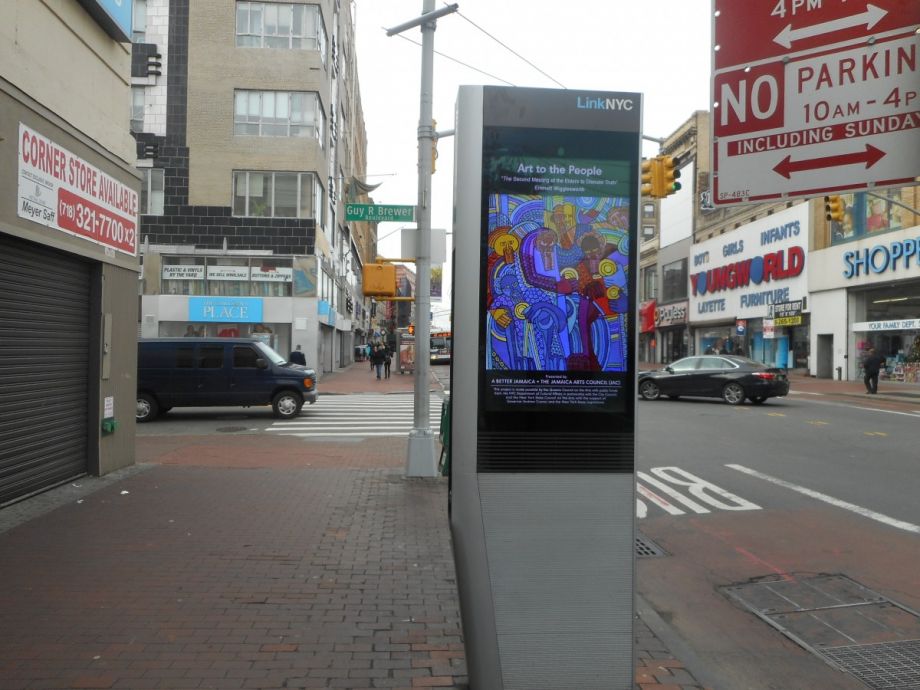 A LinkNYC Kiosk on the street in Queens (Credit: DanTD)

Berry Villegas walks his dog at least twice a day, once in the morning and once at night. Along the way, Villegas scopes out the silver LinkNYC kiosks. These 10-foot-tall, silver monoliths have replaced sidewalk payphones in more than 1,300 locations throughout the five boroughs. The kiosks provide free WiFi and calling functions and allow users to charge their phones.

Villegas looks to the gleaming, 55-inch screens on either side of the kiosks, seeking new additions to a series of numbered New York City facts, rotating among the paid advertisements, event listings, weather updates and transit alerts. If Villegas, 44, comes across a fact that strikes his fancy, he posts a picture of it on Instagram.

His family and friends back in Florida, where he lived before moving to the city in June, now know that there is a superhero supply store in Brooklyn (fact number 139), that New York City gets 15 times more snow than the South Pole each year (fact number 206) and that Martin Hildebrandt opened the United States’ first tattoo business in New York City in 1870 (fact number 304).

“Those are just things that stop you in your tracks and you go, huh, I didn’t know that,” Villegas says. “It’s nice to not just see someone selling me a phone plan or a movie trailer. It’s nice to see just facts.”

That’s the intention of Amanda Giddon, the woman behind the facts. Giddon works at Intersection, the company that manages the LinkNYC kiosks (soon to expand the network to Philadelphia). In addition to their primary functions, the kiosks host advertising and more than 50 other content campaigns, such as news headlines, information on how to sign up for health insurance, a series of comics, and the facts. The ads are on track to generate half a billion dollars in revenue over the next 12 years — enough to cover the cost of the LinkNYC kiosk services.

Giddon, 24, grew up in the New York suburbs, and still remembers the sense of awe she felt every time she rode the train thirty minutes into the city — a feeling she still experiences.

“Through this work, I’ve definitely re-connected with the city in a new way,” she said. Her interest in historical New York led her to recently pick up Jennifer Egan’s novel “Manhattan Beach.” She is eager to try Enoteca Maria, an Italian restaurant in Staten Island that features the cooking of a different grandmother each night. She heard about the restaurant during her fact research.

Giddon kicked off the NYC Facts campaign in early 2017, right when she started at Intersection. Before then, she’d been working in digital media for almost two years, after graduating from Duke University in 2015.

“My goal with this campaign is to really make New Yorkers feel like tourists and tourists like New Yorkers,” Giddon says. “The strategy is making [LinkNYC kiosks] a beloved member of the community and making life more enjoyable as people navigate the city.”

As of this writing, Giddon has curated 349 facts and rolls out new ones on a weekly basis. The Intersection communications team gives the facts a quick review before the they go live. What makes a good fact? “It’s something that can surprise and delight even the most seasoned New Yorker who’s lived decades in the city,” says Giddon, “And also can arm consumers with things they want to share with their friends.”

It can be a challenge, especially if you’re trying to surprise long-time New Yorkers. Giddon spends a few hours a week fact-hunting, which gives her an opportunity to follow her curiosity. From perusing Broadway.org, she learned that only five of the 40 Broadway theaters are actually on Broadway. According to data from Grow NYC, Greenmarket farmers travel an average of 90 miles between their farm and the city. She found that New Yorkers bite 10 times more people than sharks do worldwide while reading a Time magazine article. When FiveThirtyEight published a report on elevators in New York, the fact that 18 percent of the city’s adult population could be riding in elevators at a time caught Giddon’s eye.

A partnership with the National History Museum’s StarTalk Radio resulted in a series of celestial-themed facts. Giddon also worked with the Department of Records to create a series of historical photos displayed on kiosks in the neighborhoods where the photos were originally taken. Her plan to attend the Women’s March inspired a group of facts about women’s history and the suffrage movement in New York, all on display during the event.

Giddon keeps track of her facts on a spreadsheet and estimates that about two-thirds of the facts in her collection haven’t been published. Sometimes coworkers and friends will suggest facts to include, but Giddon must verify the facts before publishing them. Giddon finds the facts about firsts, such as the origins of the first cappuccino or Manhattan cocktail, to be the most difficult to pin down.

“People feel so strongly about New York culture and history that I make it my duty to make sure we’re putting the right stuff out there,” Giddon says with a laugh, adding, “If something is wrong, we totally will get called out on it.”