This Cool Honeycomb Beautifully Breaks Down the Sharing Economy – Next City

This Cool Honeycomb Beautifully Breaks Down the Sharing Economy 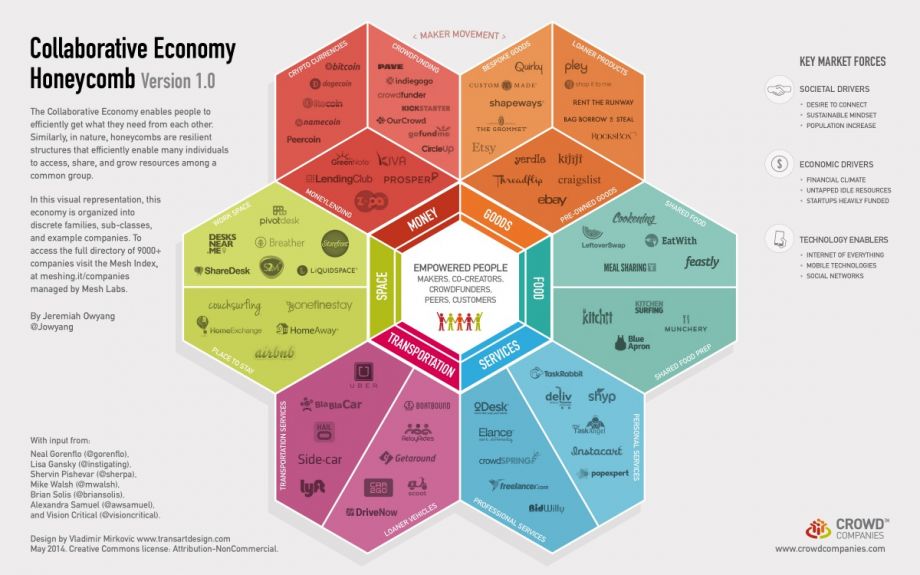 Jeremiah Owyang is a longtime tech industry analyst who now runs Crowd Companies, a six-month-old “brand council of the collaborative economy” that aims to introduce big companies to the peer-to-peer model often associated with the likes of Etsy and Airbnb. But there’s much more to the collaborative economy than that, says Owyang, and so he’s put together what he calls his “Collaborative Economy Honeycomb,” seen above.

Meant as something of a primer on collaboration for the world’s major firms, Owyang’s honeycomb also usefully breaks down the collaborative economy into its component parts, carving out easy-to-digest pieces from an often messy new economic trend.

Working with a collaboratively collected list of 9,000 different sharing start-ups, Owyang moved them into buckets, and the six biggest he ended up with are Goods, Food, Services, Transportation, Space, and Money. I asked Owyang to run through what he sees when he looks into each of the six cells in his honeycomb. 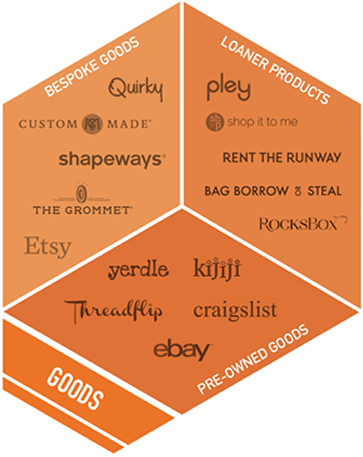 Goods. On the product front, said Owyang, what’s happening can be divided up into three classes: people creating and selling custom-made goods, like the weekend hacker using a 3D printer to design the world’s most inventive coaster. Then there’s the opportunity now to, “rather than going to the store to get it,” buying a wanted good through a peer-to-peer platform like Etsy. Lastly, he says, there’s rental-on-demand: “I use Pley to rent Legos for my daughter. She’s 18 months. I don’t want to own Duplos because she won’t need them” when she gets a bit older.

Food. Owyang divides this cell into food preparation and food sharing. People want good food, he says, but often don’t have a lot of time. Services like Blue Apron deliver food for on-site assembly, while Munchery enables chefs to cook and deliver meals.“It’s collaborative,” says Owyang,“because the chefs themselves are sharing a supply chain, marketing, delivery and even a photographer. They’re co-opting the restaurant, and that’s a radical change.” Meanwhile,“people are turning their kitchens into restaurants,” he says, pointing to sites like Feastly and Cookening. “It reduces waste and bonds community.” He admits that “regulators will balk, and that’s okay. That’s going to be the standardization and normalization of this behavior set.” 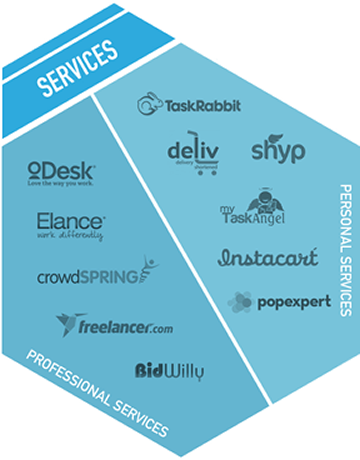 Services. Quickly arranging for someone to take care of a task for you can, says Owyang, be a personal or professional endeavor. On the former, there’s TaskRabbit for, say, walking your dog, Shyp for arranging for package delivery, and PopExpert for learning how to play the violin over the Internet. As an example of the latter, Owyang points to the creation of his own CrowdCompanies.com: “It was crowdsourced on Crowdspring.com. Someone in the Philippines designed the logo and the website. It’s tapping the crowd for business services, rather than hiring a full-time designer.” 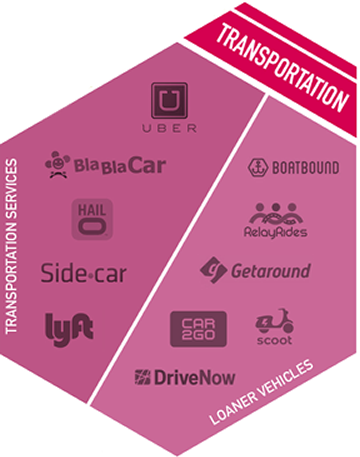 Transportation. It’s not just cars. Everything from four-wheel rides to boats and even planes are being let out in real time. (Eager for a sail? Check out Boatbound.) But the simple proposition, says Owyang, is that “you don’t have to own a car to have access to it.” Transportation is one area, he says, where big companies are already starting the “inevitable” co-option of the collaborative model. He highlights BMW’s Drive Now electric car program in San Francisco. He says he asked a company exec why they’re getting involved. The response? With cities soon reaching the car saturation point, “in the future, we’re not going to sell a thousand BMWs. We’re going to sell one BMW a thousand times.”

Space. Like the services cell, space breaks down personally and professionally. As examples of the former, Owyang points to classics like HomeAway and Couchsurfing to the lower-profile Onefinestay, which can get you that “high-end loft in Midtown,” at least for a few nights. On the business front, there’s PivotDesk and ShareDesk for sharing, well, desks, and Breather for accessing a bit of quiet space. There are retail versions, too; Owyang calls Storefront “like Airbnb for retail stores.” Work or play, though, the goal is activating idle space. Especially in crowded cities, says Owyang, the mantra of this cell is “waste nothing.” 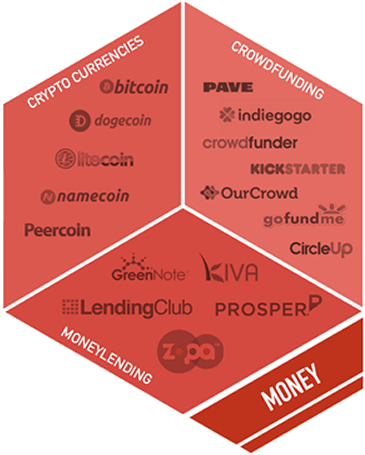 Money. Crypto-currencies like Bitcoin may or may not ever fully take off, says Owyang, but new forms of payment are powering much of the collaborative economy, he says. (“Money” is next to “Goods” by intention, says Owyang. Products are far easier to sell when it only takes a few clicks to pay for them.) There’s crowdfunding a la Kickstarter*. But there’s also crowdlending, too, like LendingClub. Remember Occupy Wall Street, asks Owyang? “It was, Down with the 1%. You’re making money while I’m getting foreclosed? Eff off. Now people can borrow money from each other to get a loan, rather than going to a bank. Occupy now has a business model.”

Owyang points out that this is but Version 1.0 of his “Collaborative Economy Honeycomb,” saying, “I only included about a hundred startups. There’s about 8,900 I didn’t include.” And he’s got his eye on adding a few more cells. There’s peer-to-peer education, shared energy production … But those probably aren’t robust enough, he says, to deserve a place on the chart.

*Correction: This post originally referenced Kiva as a crowdfunding platform, but it, too, is a crowdlending platform. It has been replaced by a reference to Kickstarter.