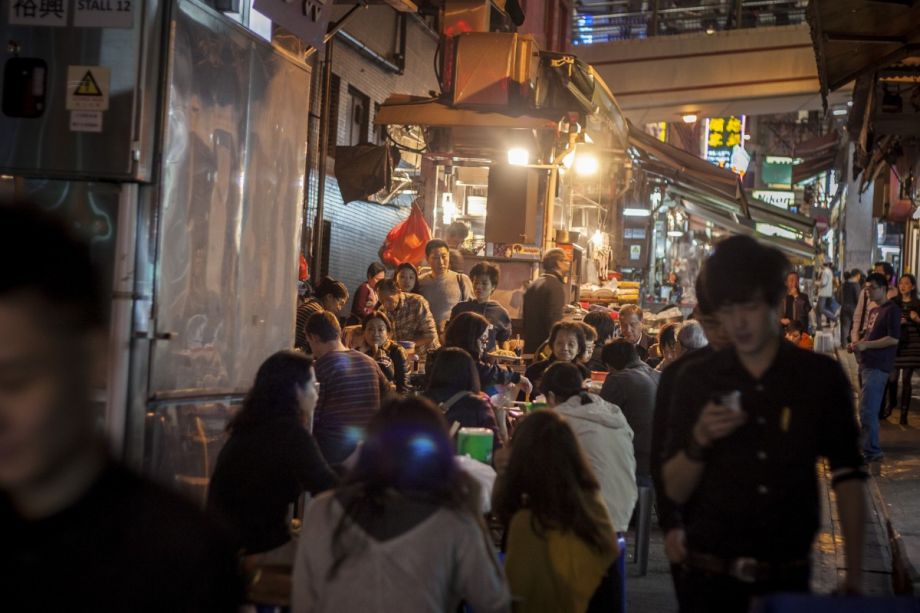 Editor’s Note: The following is an excerpt from The Future of Public Space, the second volume in the SOM Thinkers series produced by Skidmore, Owings & Merrill (SOM) and published by Metropolis Books. To celebrate its release, SOM has partnered with NextCity to host panel discussions in Washington D.C., Chicago and Los Angeles which will further the book’s exploration of how different types of public space — urban and rural, real and virtual — impact our everyday experiences in an increasingly privatized world. Visit som.com to learn more about this discussion series.

Hong Kong’s urban spaces do best when they are allowed to become a palimpsest of human activity. The area around Choi Hung, in working-class East Kowloon, is a mess of postwar housing estates that collide with old villages and busy roads. It looks confusing, yet the density of human activity makes it easier to navigate than you might expect. Emerge from the subway station and you will encounter the roar of traffic, the choking exhaust of minibuses and the amplified cries of touts selling mobile phone plans. A flow of people carries you up a footbridge and across the road where you enter a public market, its air pungent with ripe fruit and huge slabs of pork hanging from hooks. A few more steps, past the click-click-click of escalators and you emerge onto the main street of Nga Tsin Wai Village, a pedestrian promenade lined by restaurant terraces, with their clattering dishes and chattering customers. Take this route more than once and its visual landmarks become almost secondary: your other senses pick up the slack.

“People don’t have strong memories of neutral-scented spaces,” says Virginia Fung, an architect who researches sensory urbanism at the City University of Hong Kong. “It is more memorable in the streets, with these multiple senses, but these places are diminishing and being removed.” Like all cities in the era of late capitalism, Hong Kong’s diverse landscape of street markets and small businesses is ceding ground to the homogeneity of chain stores and tightly regulated upscale shopping malls. High rents create a revolving door of businesses — just when you get to know the Chinese medicine shop on the corner, it closes and becomes a 7-Eleven, which only adds to the disorientation. In Hong Kong, the social and economic terrain doesn’t just shift — it roils like the ground in an earthquake. This raises the question of how to conserve the sensory heritage of a place, and whether it should be conserved at all. Old buildings can be maintained, but what about the more ephemeral sounds and smells that gave them life?

There are a few interesting experiments in this regard. In an old working-class corner of Wan Chai, a 1920s-era tenement known as the Blue House is being renovated and adapted into a mix of independent retail, cultural facilities and subsidized housing. Many of the original inhabitants will remain, thanks to lobbying from conservations and architects, who convinced the government, which owns the property, to do something out of the ordinary. Many of Hong Kong’s heritage conservation projects buffed and shined old buildings until they are as refined as a polished jewel, like the Victorian-era Marine Police Headquarters, whose forested grounds were excavated for a shopping mall and whose century-old patina was scrubbed away to accommodate a luxury hotel. Buildings like this are still recognizable by sight, but as far as the other senses are concerned they are dead. The Blue House is an attempt to do things differently. By keeping the building’s domesticity alive and adding new activities like film screenings in the courtyard, it maintains a more tangible connection to the past, when residents played their radios, lit incense in the hallways and hung their laundry out to dry.

Not far away, in a heavily forested gully filled with birds and fruit bats — yet surrounded improbably by office and apartment towers — architects Tod Williams and Billie Tsien converted a nineteenth-century British military explosives compound into a cultural center. The military site had been off-limits to the public since its inception in 1842; in the 1970s most of it had been sold off and redeveloped into hotels, offices, apartments and shopping malls. Today, on a road across from the Conrad Hotel and the British consulate, the Asia Society Hong Kong Center announces itself with a sleek modern reception hall that protrudes from a lush hillside. Near the entrance an artificial waterfall complements the rush of water through a stream below. An elbow-shaped bridge spans the waterway encouraging visitors to linger in the humidity of the forest, immersing themselves in the scent of tree flowers and wet stone and the sound of birdsong. The path underfoot is interrupted by a set of train tracks that once transported explosives around the site. In the new buildings, smooth marble serves as a counterpoint to the gritty texture of the nineteenth-century structures.

When I spoke to Williams and Tsien, they told me they wanted to create a space that served as a counterpoint to the sleek towers around it, with their uniformly buffed surfaces and perfumed lobbies. “We absolutely want people to touch our buildings,” said Tsien. “We don’t see them as objects to be photographed, we see them as places to be inhabited where they rub off on you and you rub off on them.” Most of Hong Kong’s sensory depth comes from layers of urbanity and the clash of unlikely neighbors: a corporate office tower that abuts a street market for instance. The Asia Society’s design is unusual because it proactively engages with its context not just visually but in a way that evokes the rest of the senses.

Touch isn’t just running your fingers along the side of a wall. It’s the feel of the dry autumn breeze after a long muggy summer. It’s the experience of weaving between the stalls of a street market. Close your eyes and you can feel the tightness of the space, as a butcher’s knife thuds rhythmically and live fish writhe in buckets of salt water, which spill out and soak the pavement beneath your feet. Sensations are heightened in a high-density city like Hong Kong, where streets are crowded with people and objects and buildings are so tall and so closely packed that they stifle air flow in the streets, making a gust of wind feel all the more refreshing.

Some of Hong Kong’s most recent development schemes tend to overlook the richness afforded by the city’s density of people and activities. In fact, attempts to systematize large areas of the city have often engendered a new variety of disorientation, one that suppresses the senses so crucial to navigating its terrain. One of the most confusing places in Hong Kong is Union Square, a vast podium-tower complex that includes train and bus stations and a huge shopping mall that burrows beneath sixteen skyscrapers. The mall, Elements, is divided into distinct zones — Earth, Water and Fire — designed to assist with navigation. Except for this relatively simple visual system of organizing space, most of the mall smells, sounds and feels the same throughout, rendering visitors helplessly dependent on visual cues.

It’s this kind of disorientation that must be confronted and challenged. Hong Kong is a place where we can begin to dismantle the hegemony of vision, thanks to the rich sensory environment created by its unique combination of hilly topography and extreme density. But it is also a place that is particularly vulnerable to late-capitalist development that privileges visual order and threatens sensory heritage; the non-visual means with which its residents instinctively situate themselves are being unthinkingly eradicated by new development that seems to have no tolerance for the mishmash of uses that has always characterized Hong Kong.

Luckily, for all the Elements that have been built in recent years, Hong Kong is resilient. The very qualities that make it sensorily robust — the density, the hills, the laissez-faire approach to development — ensure it will always retain the messy crust of activity that makes it so confusing, intense and exciting. Architecture that embraces this, like the Blue House and the Asia Society, points the way to how new development can embrace and even enhance Hong Kong. But we can go even further: why not incorporate a kind of sensory assessment into the development process? The city can only be understood if it is fleshed out and revealed in its whole — not just in the dimensions of its space or in the appearance of its materials, but in the sound, smell and feeling of its living essence.

Christopher DeWolf is the author of Borrowed Space: Life Between the Cracks of Modern Hong Kong, which explores how Hong Kong's citizens have shaped their city through informal urbanism, despite a rigid government bureaucracy. His interest in cities started with SimCity and eventually expanded into the real world, where he began writing about urban history, architecture, design and culture for publications such as TIME, the BBC, the South China Morning Post and the Wall Street Journal. He currently lives in Hong Kong in a tiny apartment with a very good view.