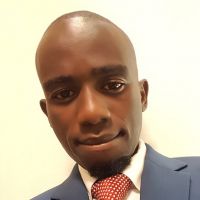 South Africa’s commercial capital Johannesburg is home to almost 8 million residents and Africa’s most sophisticated road network. But increased rainfall and vehicle traffic, plus years of municipal corruption and underinvestment have wasted away its road infrastructure, leaving motorists frustrated and cars damaged.

Now, some of South Africa’s wealthiest insurance corporations are taking over municipalities’ roles, deploying workmen to repair potholes across Johannesburg — and branding their corporate logos atop the freshly sealed holes.

Last year, two major South African insurance companies, Discovery and Dialdirect, stepped in to partner with the city of Johannesburg to repair roads through a crowdsourcing app. Just over one year into the partnership, the companies say they have repaired more than 100,000 potholes in the city, leaving their mark on the roads.

“This is a corporate social investment campaign,” Anton Ossip, CEO of Discovery Insure, told Next City. “We are doing this partnership in good faith (to) assist motorists in Johannesburg and improve our roads.”

The two companies deployed Pothole Patrol, a smartphone app that allows drivers to report potholes in the city by uploading their GPS location data and photos of the pothole. With the data captured, the two insurers send out their teams to patch up the potholes. The app, which only works for repairs in the Johannesburg metropolitan area, is the only one authorized by the city’s Johannesburg Road Agency to repair potholes.

“As insurers, potholes cause immense damage to cars and it makes economic sense to fix potholes and reduce such (insurance) claims,” Anneli Retief, head of Dialdirect Insurance, told Next City.

With the project’s success, the country’s transportation officials are now opening the door for further private-public partnerships to help fix the country’s crumbling infrastructure. South Africa’s minister for transport Fikile Mbalula announced that his department is working on a proposal to authorize more corporations to repair highway potholes. Discovery has also launched a private firefighting brigade in the city.

The state of South Africa’s 750,000-kilometer road network is dire. The country’s transport minister has estimated it could cost $100 USD per square meter to repair each pothole, noting that most of South Africa’s provincial road network is now past the 25 years for which it had been designed. Nor were the roads designed for today’s traffic volume and configuration, he said.

The partnership is only able to repair potholes that measure a maximum size of one meter by one meter. Anything bigger is classified as a reinstatement and directed to the city’s Johannesburg Roads Agency to repair. Road defects caused by underlying water damage are also referred to the city’s Joburg Water agency.

Dialdirect and Discovery say they don’t see their own involvement as detracting from the mandate of the city and elected officials.

“This initiative would not be possible without the support of the City of Johannesburg and Johannesburg Roads Agency,” Retief said. “It’s a true partnership and we are working hand in hand to make our roads safer and better for motorists in Joburg.”

In 2018, U.S. pizza chain Domino’s made headlines with a marketing stunt in which it gave $5,000 grants to cities and municipalities to fund minor repairs on potholes and road cracks. “We don’t want to lose any great-tasting pizza to a pothole, ruining a wonderful meal,” the CEO quipped in an announcement. In return, many cities provided advertising by painting Domino’s logo over the road. Many elected officials embraced the offer, while critics noted a disturbing “dystopianism” in the stunt.

One official in Burbank, California, where the company filled five potholes, questioned whether this move foreshadowed a future in which Americans relied on corporations for basic infrastructure. “Well, what’s going to be next?” she told Eater. “Starbucks will start building sidewalks in towns that can’t afford to build sidewalks?“

Ray Mwareya is an international business journalist based in Johannesburg and Canada, and a recipient of the 2016 UN Correspondents Association Media Prize. He reports for Fast Company, Newsweek, Al Jazeera TV, China Dialogue, Reuters, China Radio International and a dozen other global outlets.

With all the focus urbanists put on European cities, I'm always fascinated by stories about urbanism coming out of Asia and Africa. Here are a few stories to get you started.

How ‘Cool Roofs’ Are Helping Women Earn More in India

How One African City Is Flipping the Script on Urban Development