Public Banking Will Be on the Ballot in L.A. this Fall – Next City

Public Banking Will Be on the Ballot in L.A. this Fall 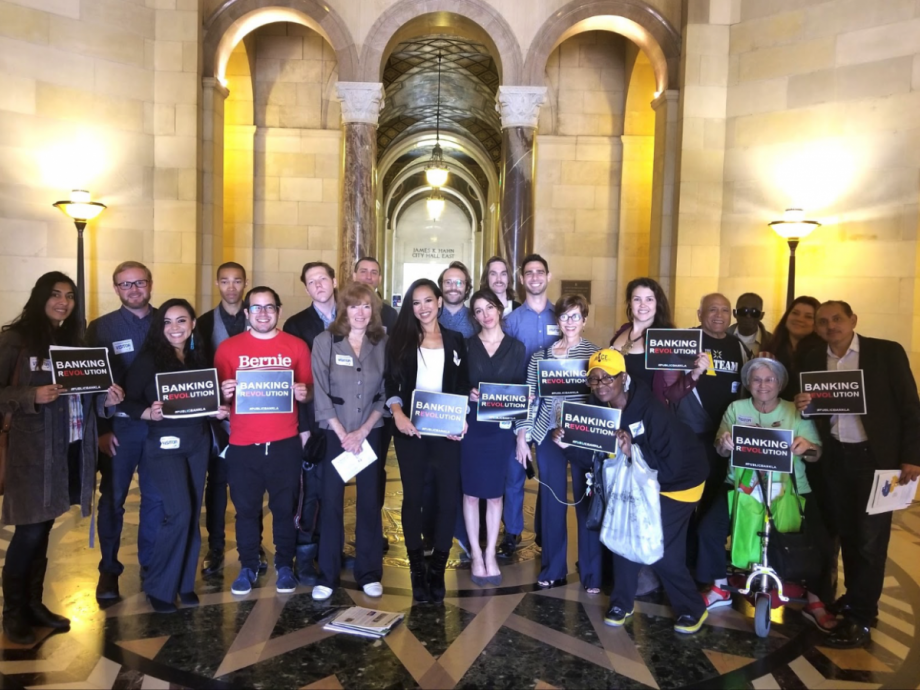 The Los Angeles City Council is moving forward with a proposed ballot measure that would ask voters this fall whether they want to create a publicly owned bank.

In a unanimous vote, council members on Tuesday, June 26, gave the go-ahead to begin the process of adding a measure on the November 2018 ballot that would amend city charter in order to create a city-owned bank. The city’s code currently prohibits it from entering into a “purely commercial venture,” unless it’s approved by voters.

To advocates, this move is a historic one that can set the tone for other public banking movements happening across the nation.

“The outcome will reflect the pulse of the national movement,” says Trinity Tran with the Public Bank LA campaign.

In New York City, dozens of residents and community organizers in early June gathered in front of the New York Stock Exchange to launch the Public Bank NYC Coalition, a group calling for the creation of a New York City-owned bank. Oakland and San Francisco are exploring the idea. New Jersey and Michigan are also considering setting up state-owned banks.

A city- or state-owned bank would, for example, hold tax dollars and other fees or income for local or state governments. The Bank of North Dakota, created in 1919, holds all state government deposits and some local government deposits. Instead of competing with other banks for loans, it primarily makes participation loans — lending alongside other banks that don’t have the cash on hand to meet the credit needs of their clients. The model has allowed North Dakota to strengthen its local banks, resulting in having the highest number of banks per capita than any other state, according to the Institute for Local Self-Reliance.

“We would have more autonomy and more say in how our city resources are invested. San Francisco is one of the hottest real estate markets in the world but we’ve got an affordability crisis. Why are we not investing our dollars to solve that?” San Francisco Board of Supervisors member Malia Cohen told Next City. “What I’m also envisioning is how a municipal bank could better support small businesses, financing small businesses run by minorities, women, veterans — those who don’t have access to the same level of capital.”

In L.A., the city government has been exploring the creation of a public bank since Council President Herb Wesson spoke of the idea in a July 2017 speech detailing his priorities for his final term. Wesson said municipally owned banks can help develop affordable housing and handle the money flowing from the newly legal recreational marijuana market.

It has quickly picked up momentum with city officials and Public Bank LA advocates working hand-in-hand.

The Public Bank LA campaign is part of part of Revolution LA, the organization that also ran Divest LA, which pressured the city to stop doing business with Wells Fargo, reported to hold more than $40 million in securities for the city. Divest LA urged Los Angeles city elected officials to divorce the city from Wells Fargo over the bank’s phony accounts scandal and support of the Dakota Access Pipeline.

In April of this year, the Los Angeles County Democratic Party in a resolution supported the creation of state-chartered public banks.

And just this month, Public Bank LA helped launch the California Public Banking Alliance, a coalition of organizers in cities across the state including Los Angeles, Oakland, Santa Rosa, and Santa Barbara.

L.A. advocates envision a city-owned bank that would accept city deposits and also manage the purchasing needs the city requires. It would make loans to the city and to other sectors of the local economy, as well as investments in community banks or even credit unions. The Bank of North Dakota, until recently the only state-owned bank in the U.S., holds around $249 million in shares of local banks around that state.

However, obstacles remain for the city of L.A.

A city report in February listed a number of challenges Los Angeles would have to overcome in order to create a public bank. A big hurdle would be coming up with a substantial amount of capital to start a bank, the report said. The Federal Reserve Bank of Boston, for example, estimated that a public bank for the State of Massachusetts would need $3.6 billion in start-up capital, according to the report.

For now, Public Bank LA will be focusing on educating voters on the issue and “galvanizing support from stakeholders in the community, including grassroots groups, students, community leaders, and labor,” Tran says. “We need to mobilize for a critical mass of support, to ensure a majority win in November.”