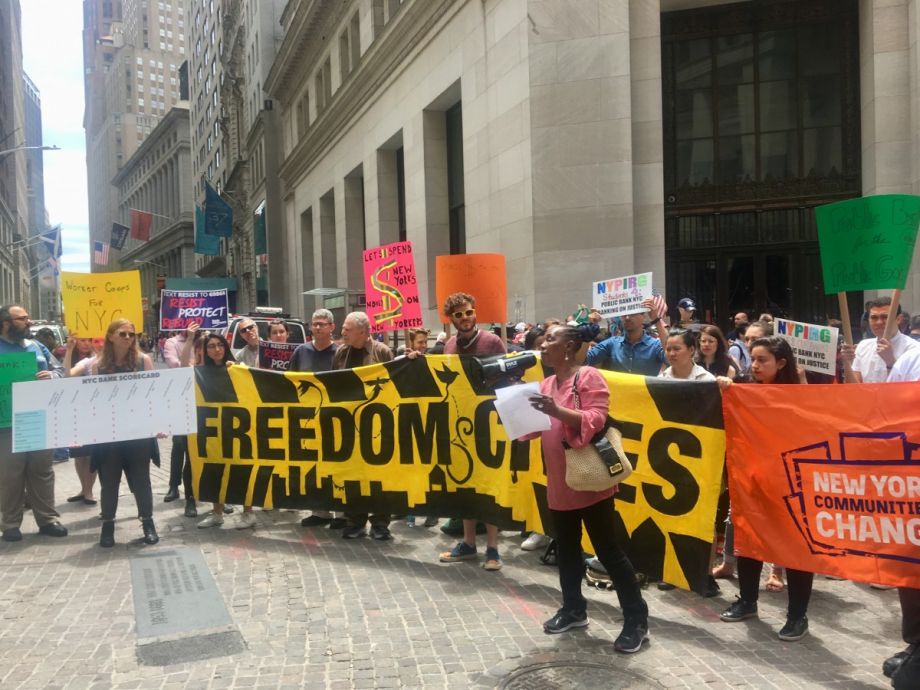 Winsome Pendergrass addresses the crowd at a June 5 rally on Wall Street. (Photo by Aline Reynolds)

Winsome Pendergrass wants a better chance at securing financing to buy a home. At a June 5 rally in front of the New York Stock Exchange, the 59-year-old Brooklyn resident talked about how three-quarters of her monthly income goes to her $2,200-a-month rent, which has nearly doubled since 2010. She’s watched her neighbors get pushed out by rising rents.

“We don’t even recognize our neighborhoods anymore,” she said. “The affordable apartments are all gone, or they are disappearing fast.”

Pendergrass was one of dozens of residents and community organizers who were gathered in front of the stock exchange, on Wall Street, to launch the Public Bank NYC Coalition. Made up of more than two-dozen groups, the coalition is calling for the creation of a city-owned bank that would serve as the repository of all local taxes, fees, fines and other municipal revenue — in contrast with the current system in which around 20 banks are currently authorized to provide bank accounts for New York City government as well as its various agencies and affiliated entities.

“We need a public bank…here to serve and to answer to us…to keep the wealth in our communities, invest in real, long-term affordable housing, and [get taxpayer money] out of the hands of Wall Street vultures,” Pendergrass said.

As a symbolic gesture, the coalition announced the start of its citywide campaign the same day that the New York City Council was slated to adopt its $89 billion budget for 2019. The public bank coalition’s launch timing also hearkens to the city’s announcement last June that it was joining other U.S. cities in breaking ties with Wells Fargo due to the bank’s failing grade on its most recent Community Reinvestment Act examination.

Public bank advocates argued that the status quo — private banks’ storing and managing of public funds — results in taxpayer money being directed to harmful purposes such as fracking, gun manufacturing and sales, and, particularly in NYC, developers who take out bank loans to acquire rent-stabilized buildings and flip them into market-rate apartments or condos.

“We want New York City to take our public dollars out of those banks — all of it,” said Deyanira Del Rio, co-director of New Economy Project, at the June 5 rally. “And we want New York City to put that money in a public bank that is owned and controlled by the people through our government, and that is held accountable to New Yorkers and our communities.”

Linda Diaz also spoke at the June 5 rally. She recently co-founded the worker cooperative Brooklyn Stone & Tile with five other former employees of a stone and tile firm that recently closed. The new cooperative received $700,000 in startup capital from The Working World, a community development financial institution dedicated to nurturing employee-owned businesses in low-income areas.

“It is with extreme pride that I report to you that we launched [Brooklyn Stone & Tile] in April and secured our first countertop sales in May,” said Diaz. “A great public bank in New York City should provide fair and accessible financing, the way The Working World does for workers just like us.”

A city-run bank could trigger the creation of hundreds of community-friendly financial institutions around the city that would direct funds to working-class communities, Working World Founder and Executive Director Brendan Martin told Next City in an interview.

“A public bank is like a reservoir — you’re going to need more plumbing on a smaller scale to get the water to those places,” says Martin, explaining how the Working World would be like one of many smaller water tanks that would draw from the public bank “reservoir.”

There are few precedents for a municipal public bank in the U.S. San Francisco, Philadelphia, Los Angeles, and other U.S. cities are considering setting up government-owned banks, as are the states of New Jersey and Michigan. Until recently, the only public bank in the U.S. was the 99-year-old Bank of North Dakota, serving as the repository of that state’s public revenues. In April, American Samoa received approval for a public bank serving the U.S. Territory, after a two-year wait.

“We have to figure out a tremendous amount of the logistics and details,” says Sarah Ludwig, co-director of the New Economy Project, in an interview with Next City. “But we have a lot of sharp, super-dedicated minds that are on this.”